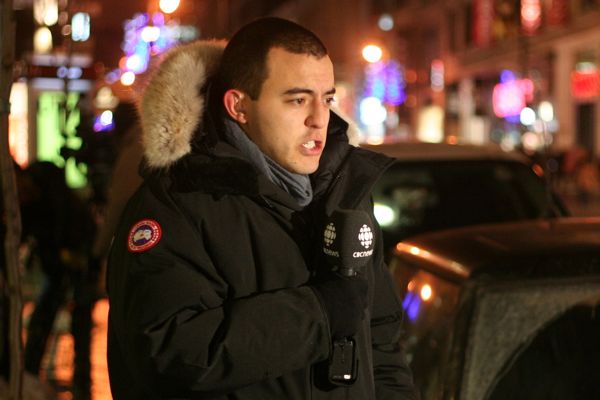 Kai Nagata reporting live from outside in the cold last January

More than three months after posting an opening for a Quebec City reporter to replace the retiring John Grant, CFCF reached out and stole an up-and-comer from its direct competitor, hiring CBC Montreal reporter Kai Nagata for the job.

The station didn’t get much demand for the job internally, with much of its staff consisting of veterans who aren’t eager to move to a city that’s more than a two-hour drive away and doesn’t have much of an English scene.

“I think our current staff of reporters are pretty happy with what they’re doing now, and simply chose to stay put,” CTV Montreal news director Jed Kahane told me. “Most of them have deep roots in Montreal, with families and other personal commitments here, so I wasn’t expecting any internal applicants.”

So instead, he reached out to Nagata and offered him the job, which Nagata formally accepted last Friday.

“I’ve been watching Kai since he started at CBC and was always very impressed with his work,” Kahane said in a totally not-press-release-y way. “He’s a serious journalist with a lot of insight and commitment. He’s also a great storyteller who is at ease in front of the camera. I think what matters most in this profession is curiosity, a critical eye and a strong desire to inform the public responsibly. Kai has all of that; the rest he’ll learn.

“I saw him cover the opening day of Marc Bellemare’s testimony the other day for CBC’s The National, and he did a great job. I’m really excited he’s joining our team, and like his predecessor John Grant who is retiring at the end of the month, I’m confident Kai will earn the respect of our viewers.”

Nagata, 23, has only been working at the CBC since the spring of 2008. He moved to Montreal from Vancouver a year earlier to take Concordia’s graduate journalism diploma program. I’ve known him since then – we play the occasional soccer or board game. (So feel free to compensate for any bias this post may have in his favour.)

“A chance to step up my game”

Asked about his move, Nagata said he was both excited about this new adventure and sad that “I’m leaving behind the only journalistic family I’ve ever known. These are people I respect professionally but I also shared a lot of laughs and frustrations and cold cafeteria meals with. It’s not an easy thing to walk away from.”

Still, Nagata said he has felt “a sense of restlessness” that this new opportunity can help alleviate. “They’re giving me the chance to cover the biggest stories in the province for the biggest anglophone audience in the province and to immerse myself in francophone culture in a beautiful city and find out what I’m made of.”

“CBC went out of their way from the very beginning to challenge me and to present me with opportunities to cover these interesting stories and to go places and talk to people and to file nationally for radio and TV, but when it came down to it I just felt like the job that CTV is offering me is a chance to step up my game as a journalist.”

Nagata said he’s particularly glad that he’ll have something few television reporters have the luxury of these days: a beat. “Politics is about people,” he said. “There’s a lot of beats that I admire, but politics has always attracted me.”

The CBC was gracious about Nagata’s career advancement, while putting a positive spin on it.

“Kai is very talented and we’ll miss him around here, but we’re happy for him and wish him all the best,” said News Director Mary-Jo Barr. “I’m proud to know our journalists at CBC Montreal are second to none, and are sought after by other organizations.”

Barr can hardly fault Nagata’s move. She herself used to work at CTV, and plenty of people have jumped from one station to the other.

Nagata gave his two weeks’ notice and plans to keep working until next Friday. He’s currently passing on specialized videojournalist training he received (“videojournalist” being CBC-ese for “working without a cameraman to save us money”) to one of the station’s other up-and-coming young journalists (and a former classmate of mine), Catherine Cullen.

Mind you, this hasn’t stopped him from already becoming friends with CTV staff through Twitter.

Nagata will join the CTV family starting Sept. 27, and spend a few days training with Grant. He takes over the beat on Oct. 1.