After staying silent for months following the announcement in March, a small group of cable companies has started a very public campaign to get people to oppose the proposed purchase of Astral Media by BCE (Bell). 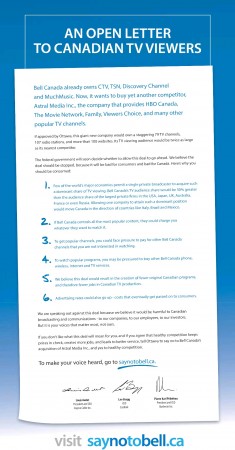 Full-page ads from Say No to Bell (Quebecor, Cogeco and Eastlink) appeared in major newspapers on Tuesday.

It’s called Say No To Bell (Dites non à Bell), and it launched Tuesday with a press conference in Ottawa with the CEOs of Quebecor (which owns Videotron), Eastlink and Cogeco. They gave the usual arguments against concentration of media ownership, saying Bell could abuse its dominant position to unfairly harm competitors, consumers and even advertisers. Specifically, it said:

(They also point to a list of quotes from various media writing about the deal, including three from me.)

All that stuff sounds pretty scary. But it’s also a lot of “could” and very little “will”. And the statements seem to ignore that the CRTC has specific rules that are designed to prevent most of the things they worry about. Distributors are not allowed to show undue preference to affiliated channels, and they are required to carry channels owned by competitors (and include those channels in packages where their own channels are included). Specialty channels, meanwhile, are not allowed to charge excess fees, nor refuse to offer their channels individually.

That’s not to say there aren’t legitimate worries here. Media concentration wouldn’t be happening if it didn’t result in a significant advantage. Larger companies are more efficient (centralizing paperwork and technology, for example), and even though there can’t be any formal advantage given to affiliated services, it happens in practice. (Cogeco gave the example of Bell’s RDS2, which it said was withheld from it for months until an arbitrator imposed a deal.) There are also advantages to be had in areas the CRTC doesn’t regulate, like online video. 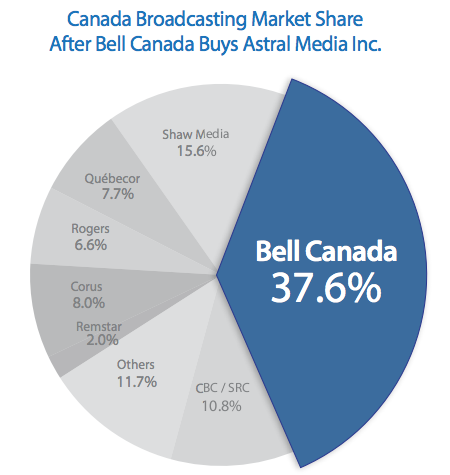 Chart of Canadian market share by the Say No To Bell campaign.

But arguments against media concentration are a bit rich coming from Quebecor and Cogeco. (I’ll leave Eastlink out of this since I don’t know them very well and they’re not a vertically integrated company.)

Quebecor’s name is practically synonymous with convergence and media concentration. It owns the largest private television network in Quebec, the largest newspaper (in terms of circulation), the largest cable company and the largest magazine publisher. It has been scooping up independent weekly newspapers in Quebec as it fights a war with Transcontinental in that industry. And it has absolutely no qualms about using its convergence power across different media.

Though Quebecor seems concerned with how big a combined Bell/Astral would become, Quebecor’s French-language television market share would still be higher, at 29.6% to 26.8%. (Say No To Bell prefers to speak of revenues, which skews heavily in favour of Astral in both languages because Astral owns the expensive premium movie services The Movie Network and Super Écran.)

Cogeco, meanwhile, is ill-placed to talk about the negative effects of market share. It was just last year that it purchased Corus Quebec, combining two of the three major players in radio in this province. As if that wasn’t enough, it asked for – and received – an exemption from the CRTC to allow it to own three French-language FM radio stations in Montreal, in addition to an English FM station and a French AM station. Combined, Cogeco-owned stations have a 51.4% market share among francophone Montrealers according to ratings data from BBM Canada. Counting only commercial stations, that market share jumps to 65%. In Quebec City, Cogeco has a 40% commercial market share, nine points more than its strongest competitor.

And even then, it applied to the CRTC to launch two more AM radio stations in Montreal, both heavily subsidized by the Quebec government. (One application was withdrawn when it turned CKAC into an all-traffic station, the other was denied because of a lack of acceptable alternative frequencies.)

These are the people warning about concentration of media ownership.

Perhaps the biggest example of hypocrisy is when Quebecor and Cogeco were asked during the press conference whether they tried to buy Astral. Cogeco’s Audet refused to answer the question, saying it was irrelevant. I take that to mean they probably did try, but lost to the big pockets of Bell.

It’s interesting that none of these three companies has yet submitted a formal intervention to the CRTC in this case (or if they have, those comments haven’t been published yet). But supporters of the deal have been flooding the commission with comments. Of the more than 450 comments about Bell’s purchase of Astral, most are from organizations that have dealings with one or both companies, and support the purchase either because of the tangible benefits package they would receive in it or just out of some apparent sense of corporate loyalty. (The number of them and their similarity suggests that Bell is pushing its business contacts to submit them, and it’s not clear what incentives they’re using.)

Among those to send their support are charities like the Saskatoon SPCA and Canadian Cancer Society, TV producers like Novem, Groupe Fair-Play and Zone 3, territorial legislators (because of the proposed upgrades to Northwestel) and major advertisers like Loblaws.

The CRTC accepted comments on this application until 8pm ET on Aug. 9, with hearings to take place in Montreal on Sept. 10. The Competition Bureau, which also has to approve the deal, issued a statement Tuesday saying it is “aware that a number of serious concerns have been expressed” and that “we are actively reviewing these concerns.”

Let’s hope both regulatory bodies can sort the truth from the BS being thrown at them from both sides.

Bell responded to the campaign with a press release focusing on how the acquisition would increase, not decrease, competition in Quebec.

Even though the purchase was announced in March, and the CRTC application published a month ago, other groups are only now making their voices heard in the Bell/Astral acquisition debate. (Though this is also because many of them filed interventions at the last minute.) Among them:

Even though it was days after the deadline for comments to the CRTC, Telus also issued a public statement encouraging a stop to the deal. Telus filed an intervention with the CRTC making a similar call.

A poll by Forum Research shows 60% of Canadians oppose the Bell/Astral merger. Is that just a matter of their distaste for large corporate mergers, or evidence that the Say No To Bell campaign is working? Either way, I predict lots more full-page newspaper ads.

38 thoughts on ““Say No To Bell”: The hypocritical campaign against Bell/Astral”