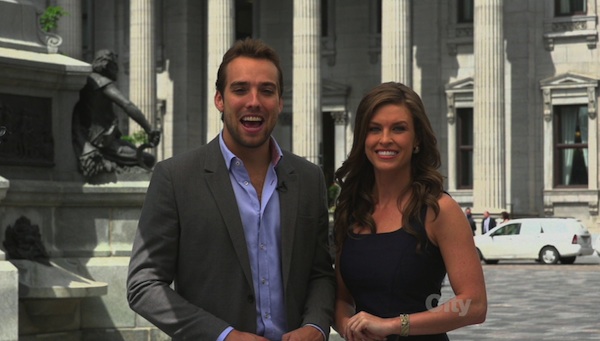 Montreal Connected, the weekly sports show that airs on City Montreal, has five episodes under its belt. So now seems as good a time as any to review it.

If you haven’t seen it yet, segments from the show are posted on Citytv.com. Each show, hosted by Wilder Weir and Alyson Lozoff from a different location each week, is composed of a handful of segments (usually five, sometimes more), mostly profiles and other feature stories that don’t lose their value within 24 hours. The parts between the segments are little more than quick intros from the hosts, perhaps with a cheesy joke thrown in.

Neither Weir nor Lozoff are new to television. They speak well and come across as warm and friendly. But there’s an artificial, forced nature to the way they introduce their segments and even the way they do their voiceovers. Their pitch goes up and down like a ninth-grader’s oral book report. Their smiles seem forced half the time, and their attempts to play off each other even more so. Maybe it’s just because they’re doing something that’s so new and they need to get comfortable with their new jobs and each other. Or maybe they’ve been taught to do television this way.

I don’t want to exaggerate the situation. They’re not cringe-worthy bad. But they need to loosen up a bit. The fact that this show is edited rather than live-to-tape, meaning every segment is recorded separately and usually with multiple takes, works against them here.

But during those genuine moments when the real Weir and Lozoff shine through, they’ve very likeable. Once they get comfortable in their new roles they should feel more like old friends than door-to-door salespeople.

One thing Montreal Connected should also get credit for is using the talent available to them. Associate producer Kelly Greig, senior producer George Athans and new media producer Elias Makos have all had at least one segment in front of the camera (Greig already looks like she’s a regular) despite their primary roles being behind the scenes. Athans is making good use of the flexibility of his staffing.

The show is shot in high definition, and the quality of the picture is for the most part very good. They don’t just grab an over-the-shoulder camera and shoot a quick interview like you’d see on TV news. They take the time to set up lighting and get enough footage to allow for them to edit pieces together well.

There are some noticeable issues though. The host segments from the first episode looked like someone had set the white balance wrong, with everything appearing much more blueish than it should. Archival clips have come up with annoyingly low frame rates, and some video (notably those on the end credits) is too jittery.

But I understand that these first episodes are being edited on a computer in a setup that’s not really designed for it. Once City Montreal has proper studios, a control room and real editing suites, things should get better.

The edited segments are diverse, so it’s hard to judge them all with one brush. Most of them are profiles, which means an interview or two and some action shots to use as B-roll. And for many stories that’s enough. The stories range in length from two to five minutes, which is just a bit longer than your average television news story.

The best thing going for the segments are the subjects. Rather than focus entirely on the Canadiens, or just move to the Alouettes and Impact during the offseason, Montreal Connected finds interesting people doing interesting things. They’ve had stories on boxing, auto racing, diving, rock climbing, curling, tennis, arm wrestling and more, without ignoring the big team sports.

These are the kinds of stories you might find on CTV News, during an off-day for the local teams, but there’s clearly a lot more exposure here. Montreal Connected is doing a good job of finding interesting people to talk about, and let’s hope they keep it up. 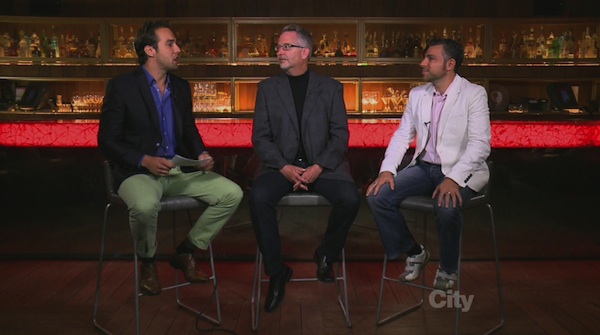 Each show features a panel discussion about some topic. That’s the kind of thing that can either be really interesting or really boring, depending on the panellists. Regulars on the panel are The Gazette’s Herb Zurkowsky, the Globe and Mail’s Sean Gordon and LNH.com’s Arpon Basu. But others also come in depending on the topic. Abe Hefter and Jeremy Filosa have also been on panels so far.

I’m really not crazy about the set used for these discussions — three chairs at the W hotel. It looks amateur and doesn’t feel very sporty. We’ll see if they move it to an actual studio when they build one for Breakfast Television. 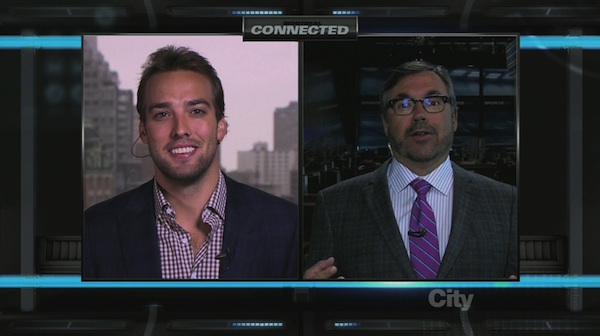 The other weekly regular feature is a chat with Sportsnet’s Stephen Brunt about some sports-related matter.

I get it, you’re Rogers, and Stephen Brunt is a good communicator, so you want to use him. But Brunt seems out of place here. He’s not in Montreal, and the topics he discusses are national in scope, not local. There’s no reason what he says wouldn’t be better suited to Sportsnet Connected than to a local Montreal show. And structuring this as a two-way chat doesn’t work when everything is so obviously scripted.

Montreal Connected isn’t SportsCentre or Sportsnet Connected. It doesn’t have a big staff or a big budget. What it does have is proximity to viewers who get a little thrill out of seeing “BROSSARD” and “WEST ISLAND” and “LAVAL” zoom across their screens in the opening graphics. And if your focus is on substance rather than style, there’s definitely a good foundation to grow off of.

The style part will come with time.

Montreal Connected airs Thursdays at 7pm on City Montreal. It repeats Saturdays at 3pm and 7:30pm and Sundays at 6pm, and airs on Sportsnet East Saturdays at noon.

6 thoughts on “Review: Montreal Connected is welcome, but needs some work”