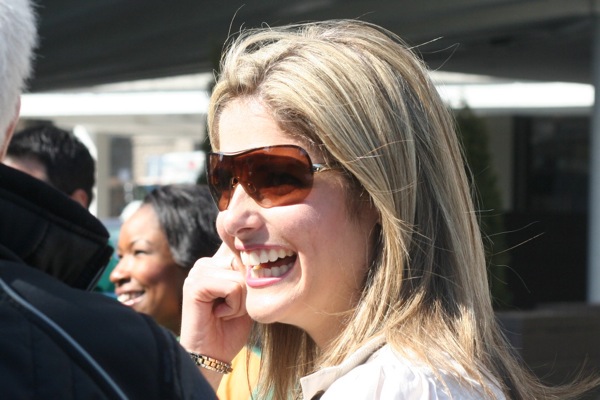 Catherine Sherriffs, who left her job as late-night anchor at CTV Montreal a year ago to go on maternity leave, is not coming back.

Sherriffs, who was given the anchor chair in 2011 after Debra Arbec left for CBC, was scheduled to return to work earlier in July. But her position was not waiting for her. Instead, the station felt that the system it put in place when she left, having Mutsumi Takahashi anchor the noon and 6pm newscasts and Paul Karwatsky anchor at 6pm and 11:30pm, was “working very well the way it is,” explained CTV Montreal General Manager Louis Douville.

“We offered her another project, something new that we wanted to start experimenting with, and she didn’t see that as a fit to her new life,” Douville explained. He wouldn’t go into detail about what that position entails, but I understand it was an anchor-like position with a web focus.

Apparently that idea didn’t sit well with her, either because of the hours, which meant she would be going through rush-hour traffic to and from her home in the Laurentians (she grew up in Morin Heights), or because of the apparent demotion, or both.

My attempts to contact Sherriffs for comment have not yet been met with a response (her Facebook profile is locked down and she hasn’t posted anything to Twitter). I’ll update this if I hear from her.

Though CTV Montreal management would disagree, it’s hard not to see this as a forced demotion (at the very least it’s a forced reassignment). And worse, one that seems to come as an indirect result of a maternity leave. It’s that leave that put Karwatsky in the late-night chair and led to the decision to keep him there.

Douville insists that the decision was made “in the last (few) months” and had not been planned before Sherriffs’s leave.

“We love Catherine. She’s a fantastic employee and a great journalist,” Douville said. And indeed, there’s little reason to believe that this decision was in any way related to her performance in the anchor chair. Rather, it allows the station to go from having four anchors to three and save money.

Sherriffs graduated from Concordia University’s journalism program in 2007, and got her start in radio, working at CJAD. She joined CTV Montreal in 2009 as a reporter before being promoted to late-night anchor.

Sherriffs isn’t the only person leaving CTV Montreal. The station let go of its human resources manager this week, and is looking to cut its workforce by 10 to 12 people (out of about 100 total employees) over the coming months, as I explain in this story in The Gazette.