CKOD-FM 103.1, the Valleyfield radio station whose history goes back to 1961, is being revived after being off the air for months thanks to a sale to Torres Media, or rather Torres Media Valleyfield, a company owned by Ed Torres, Frank Torres, Todd Bernard and Yves Trottier.

Torres Media also owns Dawg FM (CIDG) 101.9 in Ottawa, and has a licence for an unlaunched station in Uxbridge, Ont.

CKOD has been off the air since Jan. 29, and was evicted from its offices in February for non-payment of rent, according to the local newspaper. CKOD is licensed to Radio Express Inc., owned by Robert Brunet.

In order to get the station back on the air as soon as possible, the station has applied for — and the CRTC has granted — permission to temporarily transfer management of the station to Torres, which according to a brief management agreement signed on April 7 would assume all the expenses and collect all the revenue from broadcasting operations. This deal will be followed by a formal acquisition of assets, which will require a CRTC hearing.

The CRTC approved the application on May 8 but only posted it online today.

Details on sale price or Torres’s plans for the station are not included in the application. I’ll update this once I hear back from the parties involved.

UPDATE: Some information about the sale from InfoSuroit.com

Speaking of Torres Media, the broadcaster is also waiting for a CRTC decision on an unrelated matter that would see Dawg FM swap frequencies with bilingual community station CHIP-FM 101.7 in Fort Coulonge, Quebec, 80 kilometres to the northwest.

The frequency swap would allow Dawg FM to increase power from 5.5 kW to 19.5 kW max ERP, and improve its coverage of the Ottawa region, because it would not have to offer as much protection to stations on 101.9 in Cornwall and Kingston. According to Torres, Dawg FM covers only 75% of the Ottawa region as defined by Numeris, and parts of Ottawa receive the Cornwall station better than the Ottawa one. 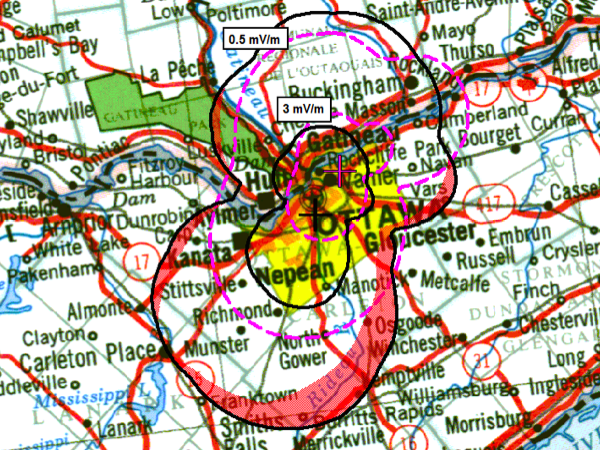 The improvement would be particularly noticeable toward the southwest, in areas like Nepean and Kanata.

For CHIP-FM, the change in frequency would make little difference to coverage area, but there’s a big financial boost. The amount is apparently confidential, but financial projections from CHIP-FM show $168,000 in additional revenue over three years coming from this agreement. It’s unclear if the deal involves further payments past these three years or if this includes payments related to the frequency change, which Torres has agreed to pay for, including engineering reports, legal services for the drafting of the agreement, and technical changes.

The public comment period for this application has closed, and a decision should be forthcoming in the coming weeks. The actual change would take a while after that because Dawg FM would be changing transmitter sites.

This kind of deal is not unprecedented. In 2013, the CRTC approved an application by Rock 95 Broadcasting, owner of Indie 88 Toronto, that proposed technical changes to three stations (all on 88.1 FM) so that Indie 88 could increase its power. Rock 95 agreed to compensate the other stations for the technical changes required.