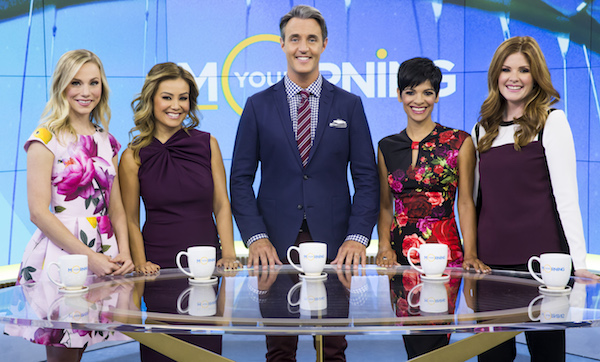 YOUR MORNING is a new approach to morning television. The series will deliver an original perspective and unique insight into the stories of the day, while showcasing lifestyle topics of interests to Canadians from coast-to-coast-to-coast.

That’s how CTV announced, in June, the show that would replace the long-running Canada AM morning show.

On Monday, the show finally debuted. I watched the first three episodes of this new show, curious how it would take this “new approach” and offer “original perspective and unique insight”, but mostly how it would make morning television relevant to a generation of people who turn to Twitter and Facebook before turning on the TV.

Despite the long preparation time, the show is still in its infancy, so I won’t judge it for the kind of opening-day jitters that affect any new show. A few awkward handovers as the hosts figure out their timing, some confusion over what videos to show during discussions, or not knowing what camera to look into. Though technically it has actually been very smooth.

I’ll also preface my review by noting that I’m not the target audience for a morning TV show. I wake up well after 9am, and I don’t have the TV on in the background while I’m making lunch for my kids.

But I’m trying to keep that audience in mind. People who won’t tune in for the full three hours, but maybe some half-hour block. People who aren’t paying full attention, and mainly want the basics: knowing what’s in the news, what the weather is going to be like, and maybe a little bit of entertainment in between.

The best way to describe Your Morning in one sentence would be “The Social as a morning show.”

It’s no coincidence. The biggest changes from Canada AM come from the fact that Bell Media took the show away from the CTV News people in Agincourt, east of Toronto, and gave it to the people behind The Social and The Marilyn Denis Show, based in the old MuchMusic building on Queen St. W. in downtown Toronto. In addition to the studio change, we get Social-like music and graphics, and even one of The Social’s hosts, Melissa Grelo (though her day only starts at 8am).

Ben Mulroney, best known as the host of eTalk, and Anne-Marie Mediwake, previously at CBC Toronto, are clearly comfortable in front of the camera and with this format. They’ll need a while to get the chemistry going, but they also don’t spend much time on camera just the two of them. They’re often either doing segments alone or joined by their co-hosts.

Grelo joins the show after 8am, and participates in panel discussions on supposedly hot debates (but there’s just so much you can contribute when you’re one of five people around a table). Otherwise, I don’t see what she brings to this show that can’t be done by Mediwake or Mulroney. 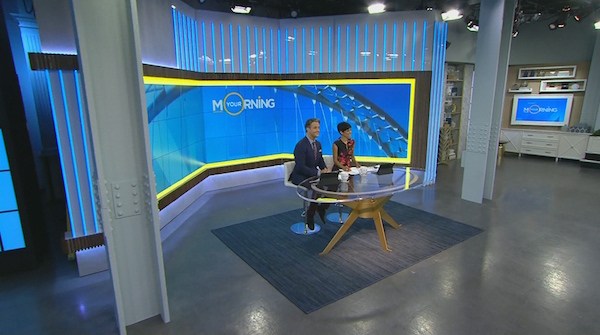 The Your Morning set

The set design of Your Morning also looks very Social-like. No wood furniture or big soft chairs or paintings on the wall. (Though they are bringing in couches for some interviews.) Instead, a more stark industrial look, with exposed pillars and a big screen behind a glass table.

Though as Bill Brioux points out, why move into the ground floor of such a historic building if you’re not going to have a window? 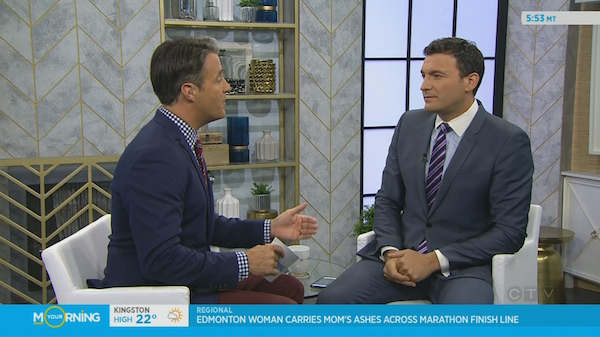 The graphics are small and not very distracting. The time in the top corner, and weather and headlines from across the country on the bottom.

But those bottom-of-the-screen headlines are also hard to read on small TVs, especially with the white-on-light-blue colour scheme.

The biggest issue with Your Morning, especially when compared with competitors Breakfast Television and Global Morning News, is that it’s not local. In fact, there’s no local element whatsoever outside of Toronto. Canada AM used to have a ticker with local headlines at the bottom, until that was cut to save money. So instead we have a ticker where you have to wait several minutes to get the local weather graphic, and you get local headlines from the rest of the country you couldn’t care less about. (Examples of such headlines include an ammonia leak at a Winnipeg curling rink and a hit-and-run in Tavistock, Ont.)

There’s also no traffic, and I wouldn’t expect to hear about local school closures on this show. 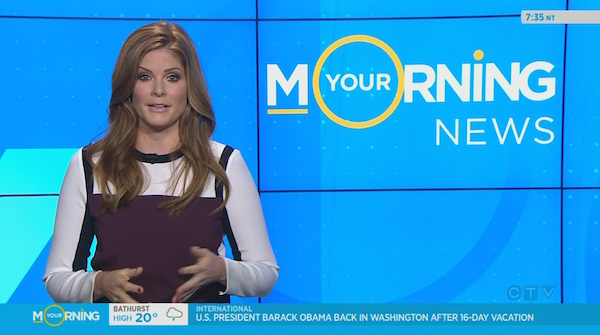 Lindsey Deluce with the news

I would say this is the most important part of the show, but who knows anymore. Lindsey Deluce, formerly of CP24, does a fine job with national and international headlines. Most of the news consists of the announcers talking over video for a few seconds, which is appropriate for a morning show. We only have a few minutes, and Your Morning does a good job of providing information in that time frame.

One part that’s a bit confusing is that sometimes the news starts with Mulroney and Mediwake doing the announcing from the main desk, similar to an evening newscast, then throwing to Deluce for headlines. I would think having one authoritative voice for the news would make more sense. 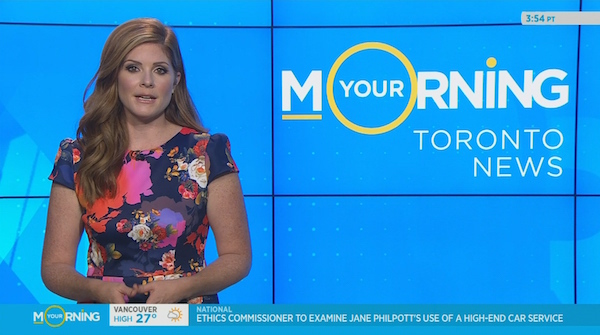 In Toronto, there’s also a separate local news segment between two commercial blocks. That’s good for Toronto, but Canada has other cities too. 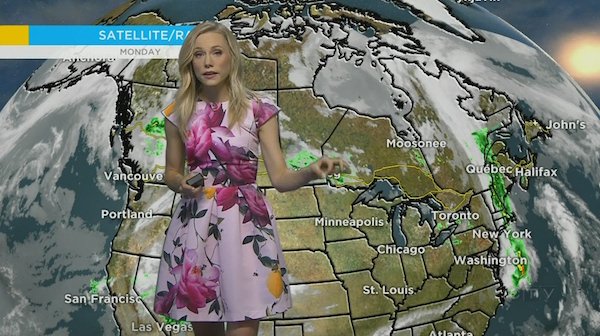 The big problem with having a national instead of a local morning show is that you have to give the weather for the whole country, and Canada is a very big country, weather-wise.

Kelsey McEwen, who did weather at the CTV morning show in Calgary, has the kind of perky warm personality that you’ll either love or despise (not that Ben Mulroney is all that different), and her approach to weather focuses on pointing out problem areas, where there’s high rainfall or severe storms expected.

But I don’t really care about what the weather is going to be in Prince George. I want to know whether to bring an umbrella to work in Montreal.

And maybe it’s just a bad coincidence, but McEwen’s weather segments so far have given very little attention to Canada’s second-largest city and its second-largest province. Even though the segments last between two and two and a half minutes, she spent only three seconds talking about southern Quebec in the first two episodes, enough time to give the projected high temperature. On Wednesday morning, it was six seconds, as she added that it would be windy. (She uses a nearly identical script for each weather segment during the day, so these apply to almost every such segment. Though in a couple of cases, she just passed over Quebec like it didn’t exist.)

The weather segments spend a lot more time talking about western Canada, particularly B.C. and Alberta, which is odd because:

The show would benefit immensely from local inserts for news, weather and traffic, but unfortunately that costs money. Instead, we have to sit through two and a half minutes of weather to get three seconds of local forecast.

Separate from the news is Morning Fix, in which Mulroney presents the more offbeat stories of the day. News purists might cringe at the idea, but it’s entertaining, so you’re just going to have to live with it. Presenting it in a quasi-newscast style (but with a different presenter) is a good structure and keeps a good pace. 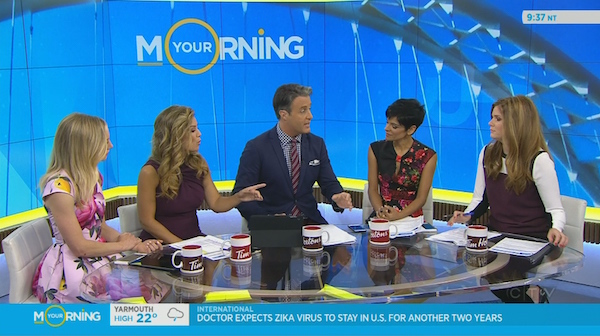 The Your Morning cast do a lot of discussing.

The host banter segments, on the other hand, don’t work for me. This is a new crew, so maybe it’s just a matter of letting the chemistry and familiarity sink in, but the bigger issue is that I rarely come out of these segments well informed about anything. Rather, I get a few minutes of the hosts regurgitating things they read online in about five minutes (and much of the time it’s stuff I already know anyway) peppered with some uninteresting personal opinions or anecdotes. There’s no “original perspective and unique insight” to be had here, I’m afraid.

The forced, insincere laughter (Your Morning is hardly unique in this regard) will probably get better over time, as the hosts get more familiar with each other and we become more familiar with them, but right now it just feels so fake, and such a waste of time. 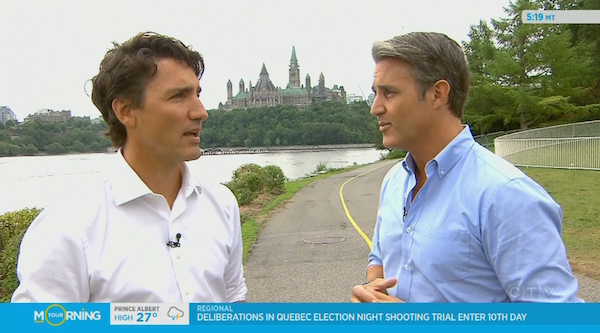 Two children of former Canadian prime ministers chatting in Ottawa. (My sympathies with anyone who was hoping to use this bike path at the time.)

Your Morning tried to make a big splash with an interview with Prime Minister Justin Trudeau. There were no stunning revelations from this interview, but we did get a sense that Mulroney is capable of asking some tougher questions than you’d expect from the host of eTalk. He asked about the powers of the inquiry into missing and murdered indigenous women, about Canada’s relationship with the U.S. and China, and about whether Canada’s police have a racial bias.

Mulroney asked Trudeau why, in light of recent raids on pot dispensaries in Toronto, the federal government continues to wait on decriminalizing marijuana use until a legalized system is in place. Trudeau answered that the goals of legalization — protecting children by limiting their access, and eliminating street gangs and organized crime by providing a legal source — won’t be achieved by decriminalization alone. That’s a fair argument, but it doesn’t answer the question of why people are still being prosecuted for something Trudeau wants to be legal. Rather than push Trudeau to answer the question, Mulroney moved on to his next topic. 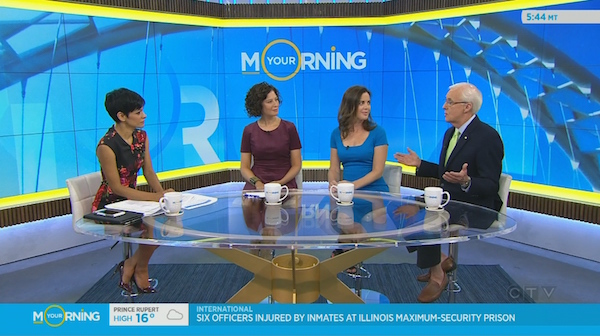 Anne-Marie Mediwake hosting a panel discussion on whether the Olympics should be downsized or split up, with Sevaun Palvetzian of Civic Action, former freestyle skier Deidra Dionne, and Brian Williams.

Otherwise, interviews and panel discussions are about what you’d expect from a morning show. Sometimes informative (such as this discussion with Brian Williams about whether the Olympics are too big and should be split up between different host cities), but often featuring guests who need a few more cups of coffee.

Is it worth it?

A lot of the criticisms of Your Morning could apply to any other national morning show, and many to local ones as well. I don’t mean to imply that Your Morning is worse than the rest.

But Bell Media is Canada’s largest, richest broadcaster, and it killed a well-liked institution to make this happen, promising “a new approach” to morning television. Instead, I’m seeing the same formula, albeit with a fresh coat of paint. And even after watching nine hours of this show, I feel like I haven’t learned very much, or been terribly entertained either.

So far, I’m failing to see how Your Morning will attract a younger audience or repatriate loyal Canada AM viewers who felt disrespected by the sudden decision to pull the plug.

For Montreal viewers, where Canada AM beat the local morning shows by almost an order of magnitude, Your Morning will probably do well ratings-wise. Nationally, Breakfast Television probably doesn’t have much to worry about (even though they got up early on Monday to remind people of their ratings dominance).

Your Morning airs weekdays, 6-9am ET, on CTV stations in Eastern Canada, including CTV Montreal.

Meanwhile, Bill Brioux reports on Your Morning’s first-week ratings (overnight estimates meaning not including those watching on DVR, which I assume is just me). The numbers, and certainly any comparison to Canada AM’s 234,000 average, shouldn’t mislead anyone to conclusions yet. It’s far too early to quantify the success of the show.

293 thoughts on “CTV’s Your Morning: A formulaic morning show that misses chances to inform”