For the past two weeks, CTV Montreal has had an additional hour of local news on weekdays. First announced in June, the new newscasts precede the usual 6pm news on most CTV stations, including Montreal’s.

Two weeks after they launched on Aug. 28, I’ve watched several of them and can start to piece together a picture of what they generally look like, and the strengths and weaknesses of the format. 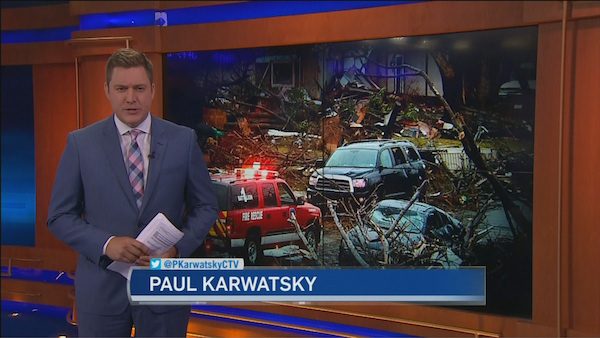 Anchor without a desk

The 5pm news is anchored by Paul Karwatsky, separating him from his former 6pm cohost Mutsumi Takahashi (Takahashi now anchors both the noon and 6pm solo, while Karwatsky still hosts the 11:30pm show). He’s a familiar face and voice so there’s little new there, but CTV seems to have made a point of never showing the anchor desk during this new early newscast. Karwatsky hosts the entire show from the right side of the studio, next to the giant screen.

The idea is to give it a different look, I guess. And maybe there’s some psychological benefit to that. But it means Karwatsky is standing whenever he’s on camera. 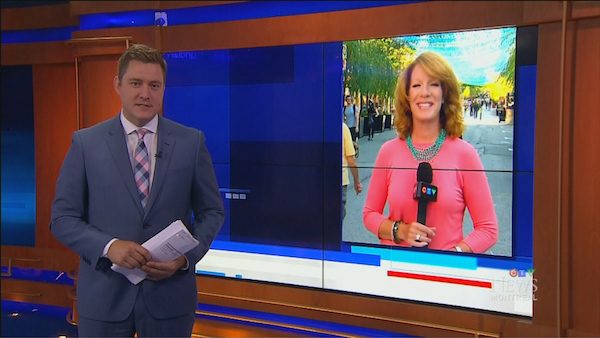 There are some advantages to doing it this way. One new look is the live reporter handoff, in which video of the live reporter slides into frame on the screen. The anchor can introduce a story and then literally turn around and face the reporter’s image. It’s an effect that works well. 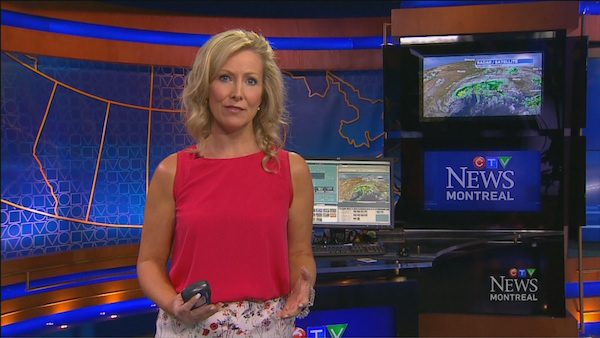 Lori Graham at the weather desk.

On the other hand, the no-fly zone of the anchor desk separates Karwatsky from weather presenter Lori Graham, who’s on the other side of the studio at her desk. Though they hand off to each other back and forth several times, they’re never in the same shot even though they’re in the same room.

Graham does all her weather segments from this camera angle, and doesn’t use the nearby chroma key screen during her segments at 5.

It’s hard to evaluate the weather segments at this point because devastating hurricanes have been a major part of every newscast since the new show launched. Graham’s segments have included local weather but also a lot about Hurricanes Harvey and Irma, even introducing packaged reports of hurricane-related stories from U.S. sources and in one case doing a live remote interview with a weather expert. 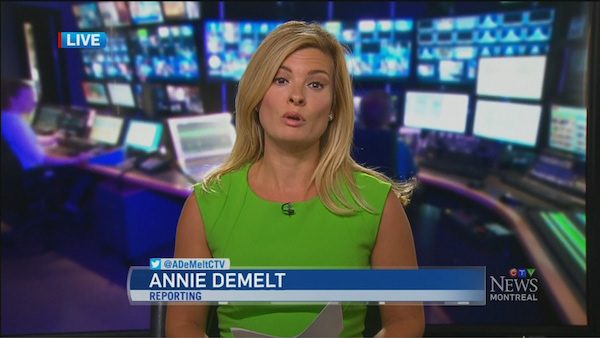 During most 5pm shows, the first report generally comes from Annie DeMelt, who is now dedicated to this show. She reports on the top story like a live reporter, with a focus on giving summary information (often with graphics). The first two weeks had her mostly reporting on hurricanes, presenting information that had been collected from other sources.

Visually, DeMelt’s reports feature her sitting with a blurred-out video of a TV control room behind her. It looks kind of fake to me and I wish they’d go with something else.

DeMelt reappears around the half-hour mark, either giving more details about the top story or reporting on another story entirely. In total her segments last for about five minutes of the show. 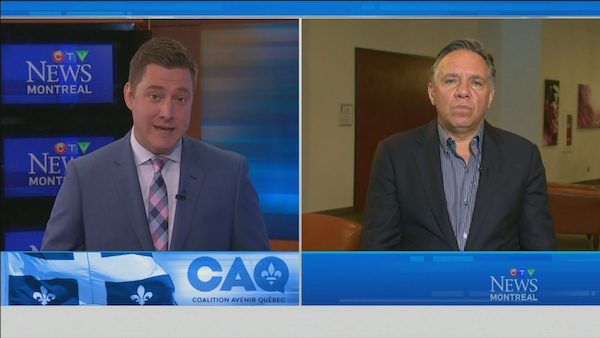 Karwatsky with a live interview with CAQ leader François Legault.

Every 5pm show features a newsmaker interview, in which someone connected with the news answers questions posed by the anchor. But unlike the noon interview, which is in studio and can sometimes be more light, the 5pm newsmaker is usually hard news and almost always done by live remote link. It’s also usually much earlier in the show, coming around the 10-minute mark, though sometimes it’s pushed to after the half-hour mark. Usually it’s five minutes long, but sometimes can be longer (an in-studio interview with Premier Philippe Couillard lasted eight and a half minutes).

It’s an easy way to fill time and usually informative, so this is a good addition to the show, assuming they can continue to find an interesting guest every day.

Having a newscast at 5pm instead of 6 means reporters have to be ready with their stories an hour early. I don’t know how well this is happening, but the structure of local stories at 5pm is a bit different than we’re used to. They’re closer to what we see at noon — mainly video of the reporter’s talking head, interspersed with some B-roll and short sound clips. Though unlike at noon, they’re not always live, and they’re done in a monologue format rather than a question-and-answer back-and-forth with the anchor.

The stories aren’t as polished as they would be if they spent more time in the editing room (but shoutout to reporter Kelly Greig, who had well-edited packaged reports for three shows I analyzed in depth), but they don’t come out too badly either.

About the only annoying thing is the signoff. Rather than “Reporter’s Name, CTV News, Optional Location”, they just say “back to you” even if they’re not live. Omitting the name of the anchor in this signoff also allows local stations to use each others’ stories, which they do quite a bit. About a quarter of the newscast is news from other provinces or other countries.

Just like for the 6pm newscast since the elimination of the sports department, there’s no sports segment for the new 5pm show. It hasn’t been that apparent because the Canadiens season hasn’t started yet and the Alouettes and Impact play mostly on the weekend, but there’s no pregame preview or postgame recap. Certainly nothing about non-local teams. Occasionally a sports story will be covered as a local news story by a news reporter, but that’s it.

I would have expected some localized sports segment produced by TSN, similar to what Sportsnet does for Breakfast Television, but if that’s in the plan, it hasn’t materialized yet. 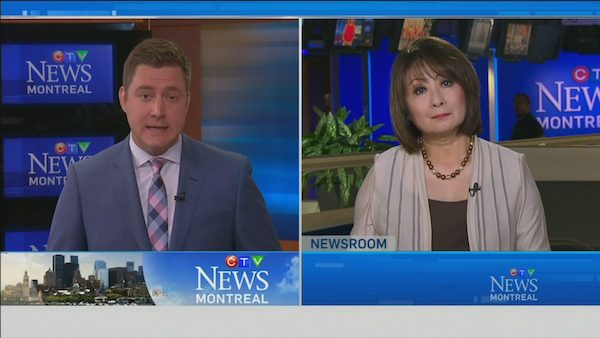 Karwatsky checks in with Mutsumi Takahashi around 5:30pm to find out what’s on the 6pm show.

Karwatsky and Takahashi do appear on screen together a couple of times a day. The 5pm newscast includes a brief segment about halfway through in which Takahashi, in the newsroom, gives a preview of what’s on the 6pm show. Karwatsky also joins Takahashi in the second half of the 6pm show, acting more as a reporter than an anchor, recapping a story that was presented at 5. And Karwatsky finally joins the anchor desk just before the end of the 6pm show with Takahashi and Graham to preview what’s coming up for 11:30pm.

I analyzed three 5pm newscasts — Thursday, Sept. 7, Monday, Sept. 11, and Tuesday, Sept. 12 — to see how much it spends on each type of story to get a quantitative idea of its format.

It breaks down about so:

These are rough averages, but it comes up to about 40 minutes total. Add a couple of minutes for intros, promos, “coming up” teasers and other filler, and the rest is ads.

Bell Media assures me that there will be additional jobs created as a result of this move but hasn’t said how many. DeMelt and Tania Krywiak have been assigned to this newscast (Krywiak as a lineup editor) but their former reporting jobs haven’t been posted yet.

But even if there are a few more jobs, the big takeaway from this new newscast is that CTV is trying to do more with less. The same reporters presenting the same stories as they do at 6pm. No new anchor, no regular sports coverage, and not much additional news overall. The newsmaker interview is nice, but you can be forgiven for expecting more, especially when CTV is getting an infusion of new money at the expense of Bell’s community television stations.

Correction: An earlier version of this story misspelled Tania Krywiak’s name. Her first name, not her last name. Which I guess just makes it worse. The author regrets not having a convenient scapegoat to take the blame.