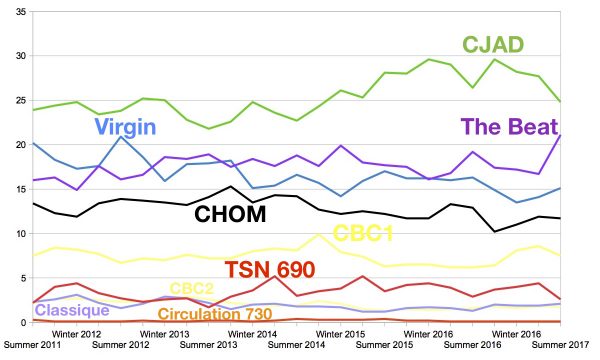 Numeris has released the summer ratings for Montreal radio stations, and though there isn’t much new here, it’s more good news for The Beat 92.5. Its 21.1% share of tuning hours among anglophones is the best it’s gotten since the station launched out of the ashes of The Q in 2011.

The new report widens the lead it had over direct competitor Virgin Radio 96, which appeared to narrow slightly in the spring. As the chart above shows, Virgin hasn’t been ahead of The Beat in this category by any significant margin since 2012.

For much of that time, Virgin did claim the lead among the adults 25-54 and women 25-54 demographics that appeal to advertisers. But The Beat has since won in those categories, too. Steve Kowch has some numbers compiled from Bell Media that show The Beat winning in every demographic.

It also can’t claim to have the most popular morning show, so it did the next best thing and claimed to be the fastest growing one:

Bell Media did something similar on the French side, claiming Rouge FM 107,3 is the most improved radio station over the summer. But among all francophones, Cogeco’s Rythme has 50% more listening hours.

Like Virgin, CHOM is also experiencing a long-term downward trend from its high in 2013.

In commentary online, it seems the station anglos want to talk about is TSN 690, predicting doom over a drop from the spring as well as last summer that is certainly rock-solid evidence that the on-air personality they don’t like is awful and should be fired. I don’t know why the ratings are down (though the P.K. Subban trade probably had people tuning in last summer), but the station’s ratings fluctuations don’t seem out of the ordinary for me.

As usual, take these numbers with a grain of salt. Summer is different from the other quarters, there’s less news and no Canadiens games, so CJAD, CBC Radio One and TSN 690 usually dip while the music stations peak.

91,9 Sports had a 2.3% overall share among francophones, its best result since launching that format, putting it just behind ICI Musique and Radio Classique in terms of listeners.

18 thoughts on “Montreal radio ratings: The Beat crows after its best book ever”