Two days after its union unanimously rejected a contract offer that would have meant massive layoffs and outsourcing of layout and administrative jobs to Montreal, Quebecor locked out employees of Jonquière weekly Le Réveil this morning, putting them in the same boat as their colleagues at the Journal de Montréal (though with considerably less news coverage). Counting employees of the paper’s printing plant who were laid off when the plant was closed recently, the union says Quebecor wants to reduce the number of unionized employees from 80 to only five.

The union, naturally, is outraged and sees this as part of a trend of lockouts and union-busting that also involved the Journal de Québec and Journal de Montréal.

I haven’t seen anything from Quebecor yet explaining their reasons (though they’ll probably sound familiar). The latest issue of the paper is from Sunday, and contains plenty of ads for Quebecor, including one with its financial statements: 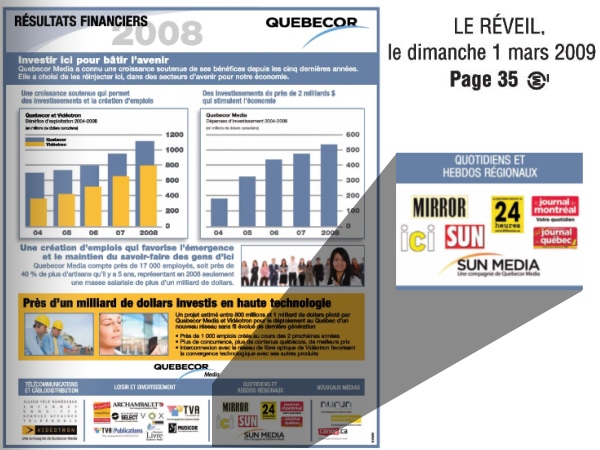