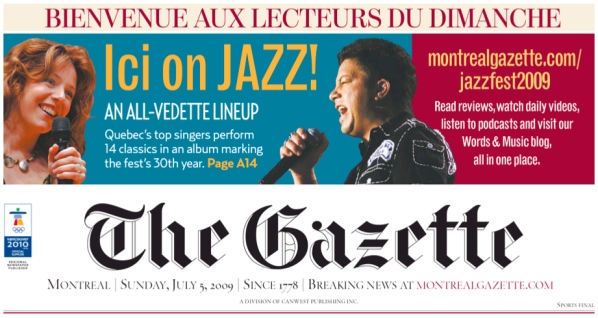 Well that’s it. There’s no La Presse today, and there won’t be any next Sunday, or the Sunday after that.

The painful decision to cut out the most expendable of the seven daily editions, made last month, has finally seen its effect. Except for a blog post from Chantal Guy, there isn’t much mention of it today, probably because everything has already been said.

I’ll note a couple of things though, both involving my newspaper. First is that today’s cover has a note which I’m sure some old lady in the West Island will ask to have translated for her, welcoming former La Presse readers who are so desperate for a paper to read on Sunday that they’ll grab the anglo rag. There’s no article inside or anything, just the banner.

It certainly wouldn’t be the first time a newspaper has tried to move in on the Sunday market left empty by another:

The other is a notice in yesterday’s paper that warns readers in some far-away areas that the delivery of their Sunday paper will be delayed because The Gazette subcontracted delivery in those areas to La Presse and now there’s no one to bring their newspapers to them. It’s one of those little secrets of newspapers that often the same person will deliver competing papers to an area (especially when there are few readers in that area, as one would expect for Trois Rivières and Sorel). La Presse’s cancellation of its Sunday edition was sudden and caught my paper a bit flat-footed.

... and again the next week