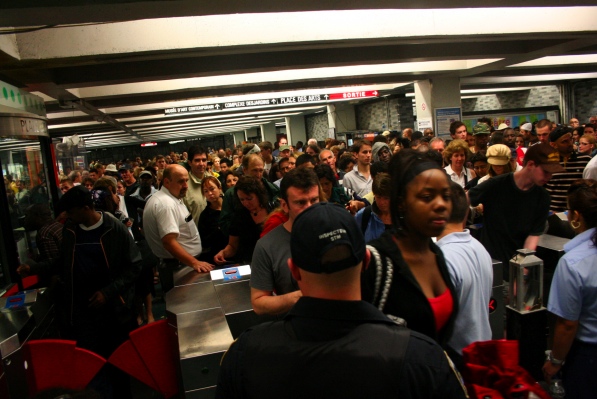 Thousands cram their way into the Place des Arts metro station after a free Stevie Wonder concert on June 30.

Being the city of festivals, Montreal is no stranger to mass gatherings. It happens so often that the STM has gotten crowd control down to a science. Two stations – Pie IX and Jean-Drapeau – were specifically designed to handle large crowds for big events. Others can, with the help of some extra staff, be made to handle lots of people for a special event. It happens every Saturday night at Papineau (during the fireworks festival), and after every Habs home game at Lucien L’Allier.

The way it works used to be very simple. Open up a gate or unlock a turnstile, pull out one of those old-style fare collection boxes, and have an employee accept change, collect tickets or check passes to herd the crowd through quickly. It wasn’t perfect, but it helped a great deal.

At least, it did until Opus. 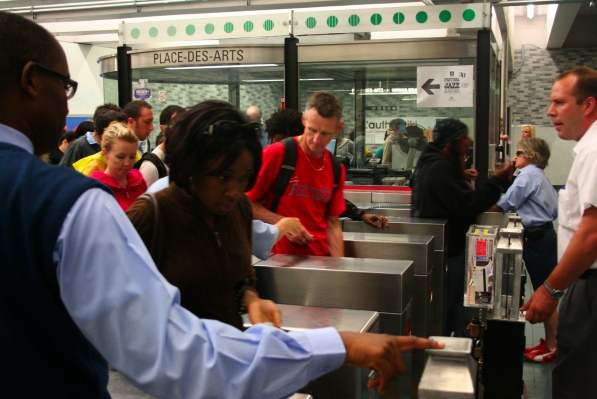 The Opus smart card has a lot of things going for it. It allows the STM to better control fares, it can be replaced when lost (assuming it is registered), it can be refilled, and it reduces human error in fare collection.

But there are also problems with it, similar to the problems I earlier mentioned with the accompanying magnetic-stripe cards. Two of them have a direct relevance here:

The first part makes it useless to add extra staff. You can’t tell by looking at an Opus card whether it’s valid or not. You can’t manually deduct fares from an Opus card. Without a specialized reader (and I’ve yet to see an STM employee with a portable one), all they can do is tell you to stand in line at one of the turnstiles.

The tickets are a bit easier. Fare information is printed on the back, and so they can be taken and verified. Exact change can also be counted by a human. So long as the old paper transfers are still available, this method can still be used to clear passengers. But the vast majority of users use unlimited passes of some kind, either weekly or monthly.

The second part only makes the situation worse. With a magnetic-stripe plastic CAM, sliding the card through its reader would receive instant feedback: a green light and welcoming chime saying the card is valid, or a red X that denies the card-holder entry. The mechanical computer would make its decision by the time the card had completed its swipe. 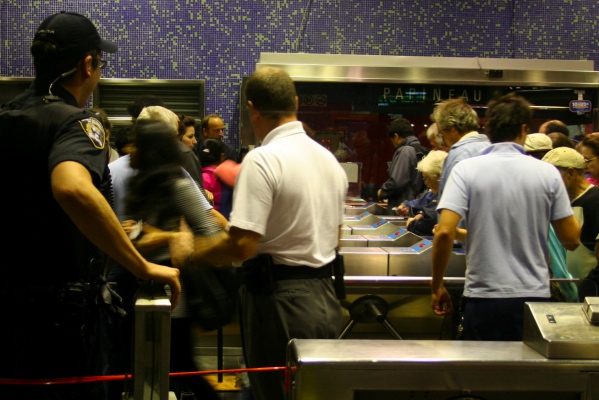 Turnstiles at Papineau after fireworks

At the Papineau metro station on Saturday night, I decided to actually time how fast people could get through. In one minute, 80 people made their way through the five turnstiles (including the one at the booth). That works out to 16 people a minute through each turnstile, or one every 3.75 seconds. Last year, with the extra staff checking passes through an open gate, the rate was much higher. 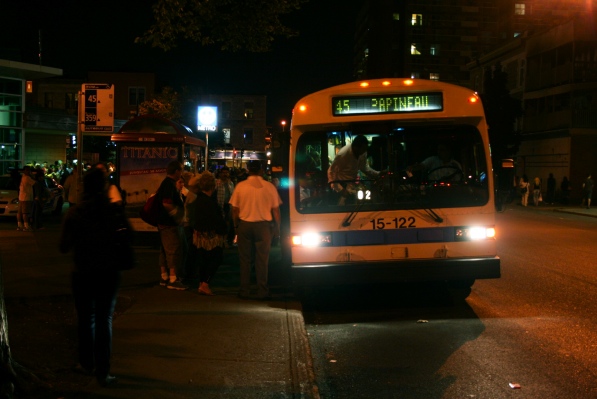 Passengers board the 45 Papineau after fireworks

Outside, passengers heading up Papineau were boarding the 45 bus. It took four minutes and 25 seconds to board 65 passengers (all standing in a line), which works out to about four seconds for each passenger. In the pre-Opus days, passengers would board buses as fast as they could climb the stairs.

It’s not obvious what can be done to alleviate this problem. There’s no simple way to design cheap smart cards that show their contents in a human-readable way. A redesign of the readers that would allow them to communicate faster would certainly be much better, if such a thing is technically feasible. Otherwise we’ll just have to live with longer delays when using public transit.

35 thoughts on “The Opus bottleneck”