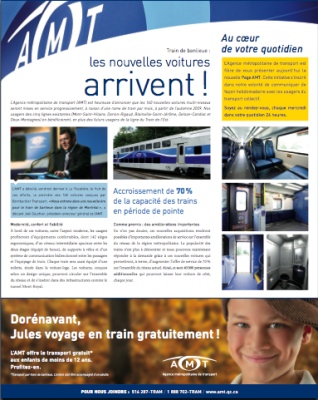 The Agence métropolitaine de transport has announced that, starting Wednesday, it will be communicating with customers via a page in the free daily 24 Heures once a week. The first such page, announcing their new train cars, is available as a PDF. It appears on Page 12 of Wednesday’s edition.

If this idea sounds eerily similar to the Info STM page in Metro, it’s no coincidence. It all goes back to how these two newspapers got started.

Metro began publication on March 1, 2001, a partnership between Swedish-based Metro and Montreal-based Transcontinental. A key part of the business plan for this newspaper was a deal it struck with the Société de transport de Montréal (then the Société de transport de la communauté urbaine de Montréal or STCUM). In exchange for exclusive distribution inside the metro system, the newspaper would give 2% of its advertising revenues (guaranteed at $900,000 for the first three years) to the transit agency. It would also give a free page in every issue to the STM so it could more easily offer information to metro users.

Before Metro’s first issue went out the door, Quebecor Media launched a campaign against the deal. Cease-and-desist letters went out to both the STM and Metro, followed by a lawsuit. Even a letter from former Prime Minister Brian Mulroney, a member of Quebecor’s board of directors. Quebecor’s argument was that a restriction against other newspapers distributing freely in the metro was a violation of its right to free expression.

The lawsuit was rejected in 2003, and in 2005 the Supreme Court of Canada refused to hear an appeal. (A similar lawsuit happened in Philadelphia against Metro, and it too ended up losing in court.) Quebecor was clearly not going to win this battle in court. 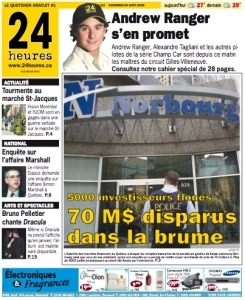 24 Heures, Quebecor’s answer to Metro, was launched as Montréal Métropolitain less than two weeks after Metro began distribution. Because of the agreement between Metro and the STM, the paper is distributed outside metro stations. And because of Montreal’s ban on newspaper distribution boxes, the company has to hire people to actually hand copies out to commuters. Without a distribution system in the metro, 24 Heures suffered, and constantly lags behind Metro in circulation figures.

At some point since its launch, 24 Heures decided to focus more on places Metro doesn’t distribute (which is basically everywhere outside the metro). One of those places is commuter train stations, where you’ll find yellow 24 Heures boxes but no Metro.

So it makes sense that the AMT and 24 Heures team up with this page.

What’s unclear is whether the AMT is paying 24 Heures for this page, or whether it’s being offered as part of an agreement with the AMT. I’ve asked the AMT about it, and will update this post with what they say.

La Page AMT will be published every Wednesday in 24 Heures starting August 26. 24 Heures is available in virtual format free online.