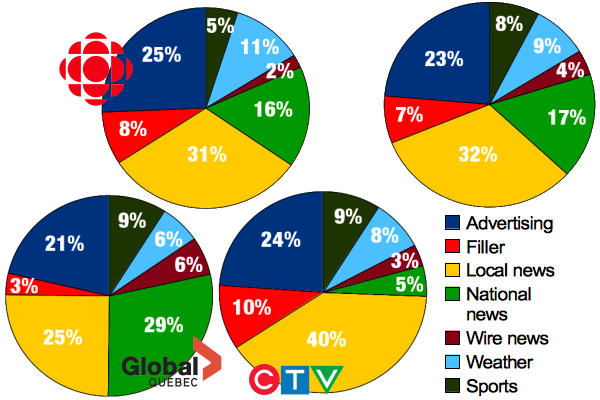 Next week is a pretty big one for local television. TQS becomes V, CJNT gets its new owner, Global Quebec becomes Global Montreal and CBMT expands its newscast to 90 minutes.

As Global’s CKMI starts embracing the city (they’ve launched a campaign with anchor Jamie Orchard for us to tell them what we like about Montreal) and CBC touts how much it’s expanding local news (though without any additional money or staff), CTV continues its campaign to “Save Local TV.”

It’s clear that all three anglo stations in Montreal are proud of their connection with the city.

But how deep does that connection go?

Nor do any of these stations provide local programming other than their newscasts. CTV cancelled its remaining non-news programs Entertainment Spotlight and SportsNight 360 last fall. Global Quebec cancelled This Morning Live in early 2008, and CBC cancelled Living Montreal earlier this year. All that’s left are the newscasts (and Global’s “Focus Montreal” – an interview show in which the anchor talks to a newsworthy interview subject from her anchor desk, indistinguishable from the regular newscast unless you’re paying attention).

But at least the newscasts themselves are pure local programming, right?

It depends on your interpretation. I noticed a trend recently, particularly at Global, where local newscasts would take packaged TV reports from affiliated stations and national reporters and use them to fill the back end of their one-hour shows. Did this serve to give a taste of a national perspective and bring this country together, or was it a way to save on staff by replacing local news with canned filler from other stations?

To answer that, I decided to quantitatively study these newscasts the only way I knew how: I’d watch them.

Over the summer, I watched three one-hour newscasts (picked pseudo-randomly) from each of the networks, timing the length of each segment with my laptop and marking down what they were talking about. I wanted to figure out how much of the newscasts were devoted to local versus non-local news.

Here’s what I found out: 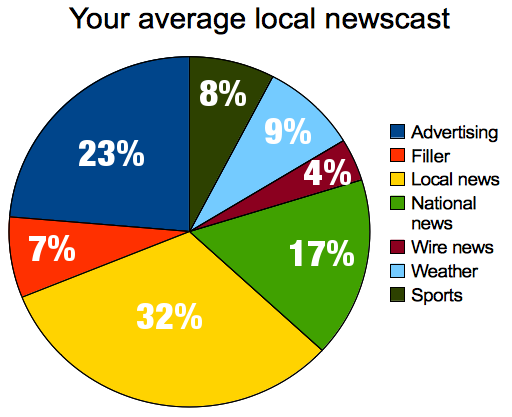 This chart shows the breakdown of your average one-hour evening newscast, based off the nine newscasts I watched.

An explanation of the categories:

Now, playing with these numbers is a bit tricky. Do you include weather and sports as local news? (See CKMI below for why that’s a problem.) What about when the anchor introduces a world news story or reads a brief? Isn’t that local production even if it’s not a local story?

In the categories above, I’ve made no distinction between introduction of stories by the anchor and the story itself.

If you want to count them separately, I’ll give you this figure: 8:08. That’s how much prepackaged material from national and international networks the local stations use in the average weeknight newscast. If you subtract that from the total, you get 38 out of 46 minutes being locally produced, or about 83%.

For the purposes of this study, I chose the main hour-long newscasts by the three networks. In the cases of CFCF and CBMT, that’s their 6pm newscasts. In the case of CKMI, it’s their 11pm News Final. There are two reasons for this: First, it’s tricky comparing a half-hour newscast to an hour-long one which tends to slow down in the second half. Second, the half-hour newscast for CKMI at 6pm follows a national newscast which already has national stories in it. Similarly, CFCF’s 11:30 newscast also follows a national newscast. These three hour-long newscasts are not scheduled before or after national newscasts and therefore all have some national content in them.

Here’s how it looks for each station: 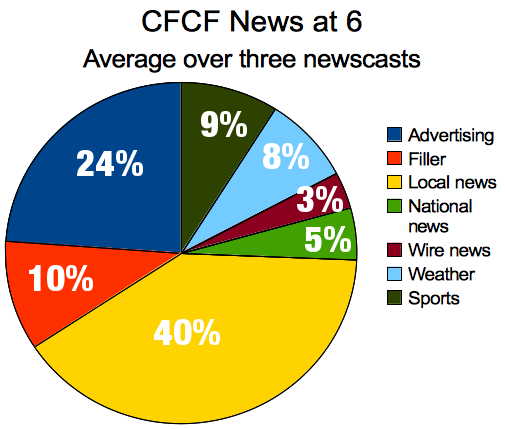 The local piece of the pie for CFCF is the largest of the three stations by a substantial margin. Adding in weather and sports, it’s the only one which fills more than half the newscast with information of local interest done by local staff. This should come as no surprise as CFCF has had a one-hour newscast the longest and gets by far the strongest ratings for local news.

On the other hand, it has the most filler (if you disagree with including the Talkback segment here, that figure drops to about 8%, just below CBMT). It also offers a limited national and international perspective, essentially limiting those stories to 20-second briefs.

The only other thing worth noting is that CFCF uses a lot of live hits from reporters – having them stand in the newsroom or out on a street corner somewhere introducing a packaged report live for no particular reason. They’ll do about two or three of these for each newscast.

*Note: I noticed after the fact that these all happen to be Thursdays. CFCF has a regular segment on Thursdays called Added Time which reviews weekly soccer news. This appeared in two of the three studied newscasts and may have thrown off the sports figure slightly. 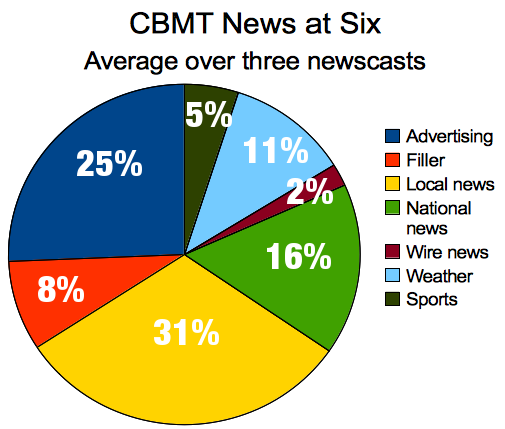 CBC Montreal has a strong local content, but also relies on stories provided by CBC national correspondents around the country and around the world. It relies very little (if at all) on local stories from affiliated CBC stations, and uses very little content from outside the Corp.

CBMT also has the most weather as part of its newscast, probably because weatherman Frank Cavallaro was such a steal for them last year and he’s the closest thing Michel Godbout had to a co-host.

On the other hand, the station also has a lot of filler, mostly due to the fact that it’s constantly teasing upcoming stories. You’ll hear “coming up” at least five times during the newscast (plus a recap of the top story in the latter half of the hour), taking up three and a half minutes of airtime, or enough to air a whole other story and then some. This doesn’t include the newscast’s intro, which also consists mainly of previewing stories in the newscast, so add another 30-45 seconds for that.

CBMT also (perhaps unsurprisingly) has the least amount of sports content. One of the three newscasts limited its sports news to a single packaged story about the Phoenix Coyotes and a promotion for Hockey Night in Canada. 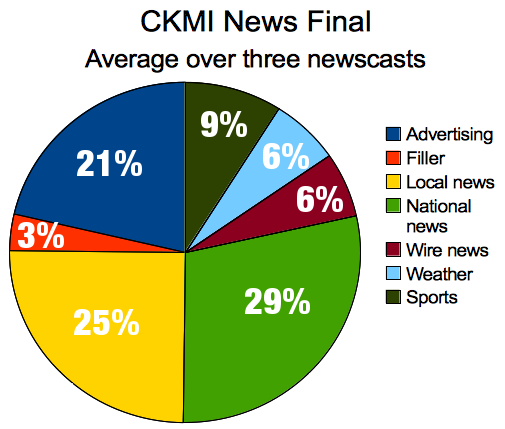 The figures from Global Quebec have a number of asterisks. First, of course, is that it’s owned by the parent company of my employer.

The smallest and cheapest of Montreal’s three anglo stations is heavily reliant on the national network. Its newscast is arguably not even produced here. Instead, packages from local reporters and lineups from local producers are sent to Vancouver where they’re integrated with green-screen video of the local anchor and turned into a newscast there to be beamed back to Montreal’s transmitter.

Its reliance on news from the Global network and other Global stations is reflected in the high number of national news stories. Other Global stations (notably in Toronto, Calgary, Edmonton and Vancouver) have much larger local news staff and offer much more local programming, and so provide many more stories of not-strictly-local interest (particularly health and human interest stories). About 13 minutes of prepackaged material from Global network reporters and other global stations is used in the average newscast, compared to only eight minutes of packages from local reporters.

The other major asterisk involves weather and sports, both of which are done by people outside Montreal. The station’s budget is so tight it can’t afford its own weather or sportscasters, so it borrows them from other stations. The weather segment is pre-taped with the weather anchor from Global Ontario (usually Anthony Farnell, who has some connection to this city at least), while the sports segment is done by someone from Global B.C. In both cases, the segments involve chats with the local anchor and the segment itself is specific to Montreal (local weather, local sports scores). Whether this qualifies as local news is up to your interpretation (and, eventually, the CRTC’s).

On the other hand, CKMI is light on filler. Host banter is negligible, and the “coming up” segments are short and infrequent.

The results should probably not be all that surprising, and seems consistent with the budget and staff levels of each station. And because each newscast is expected to stand alone (they’re not matched with national newscasts just before or just after), you expect national and international news to be included.

But is it fair to credit these stations for the entire hour as local news?

I’ll leave discussion of that to you.

12 thoughts on “How local is your local TV newscast?”