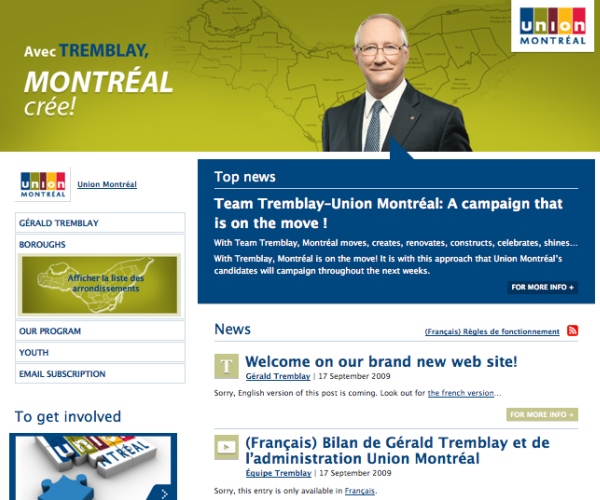 I got an email Friday morning, just as the municipal election campaign officially began, informing me that Union Montreal has redesigned its website.

So, of course, I checked it out with my usual critical eye. I was pleasantly surprised by what I found. The design was clean and simple, the page looked fine even with the style sheet turned off. They’ve got the usual Facebook and Twitter and YouTube and Flickr accounts. They’re even releasing their content under a Creative Commons license.

Great, I thought. So where’s the English version?

After a bit of searching, I could find some pages that had a link at the bottom that said “English”. That would bring me to an English version of those pages. But then I’d click somewhere and it would bring me back to the French website. Or it would be the English page and all the navigational text would be in French.

I asked the guy who emailed me, Marc Snyder, what’s up with all that. He said they’re working on it:

We’re progressing in the right direction: I think this is what a work-in-progress is all about ;-)

Building a website that’s bilingual isn’t easy. Most cool content management systems don’t think of building in support for bilingual websites. So many do so through third-party plugins. In this case, the website is WordPress based and they’re using the Qtranslate plugin.

But to launch a website so publicly without even basic information in English (at first, there wasn’t even an English bio for the mayor) seems a fairly major gaffe. Even now, most of its content isn’t accessible in English. Instead, you get a short apology with a link to the French version.

Remember, this is supposed to be the anglo party, embracing both languages of this diverse metropolis. Vision Montreal, with ex-PQer Louise Harel who speaks little English, and Projet Montréal, which doesn’t even translate its name into our language, both have better English versions of their websites.

Maybe next time someone from Union Montreal criticizes Louise Harel for alienating anglophones, she can point out the fact that people don’t need to look up what “Arrondissement de militantisme” is before they can donate to her party.

I realize this is small-time politics and we’re not dealing with real big budgets here, but these are forms people fill out to give you money. If you’re so careless about translation, I can only imagine what kind of controls you have on the $100 I’d be putting in your campaign fund.