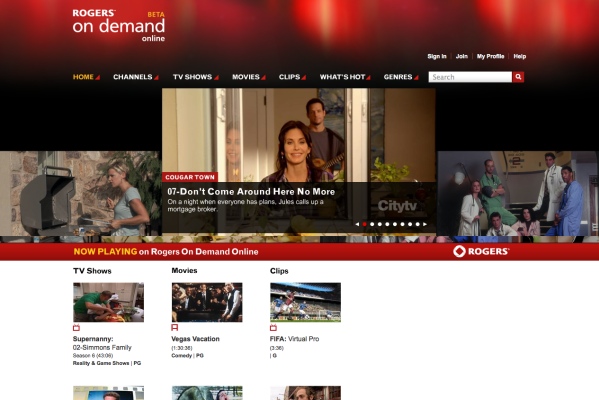 Homepage of Rogers On Demand Online

A few days ago, I got an email from a social media marketing guy at Rogers, inviting me to participate in a sneak preview of the Rogers On Demand Online service being launched on Monday (see coverage of that at Digital Home, Paid Content, Mediacaster).

It’s being called a “Canadian Hulu”, which is like saying CTV’s video portal is a Canadian Hulu, except that CTV doesn’t charge to watch its content.

I can’t imagine why Rogers would want me participating in this. I guess they cast a wide net and don’t read this blog, because otherwise they’d know I don’t think very highly of Canada’s telecom companies, and most of my reviews are negative ones.

This one is no exception.

I decided to try this thing out, curious at why I had to login twice using two different login/password pairs (I’m hoping this is just because of the beta test). Once I got in I had access to the vast library of television shows, movies, music videos and other stuff that … wait, that’s all? 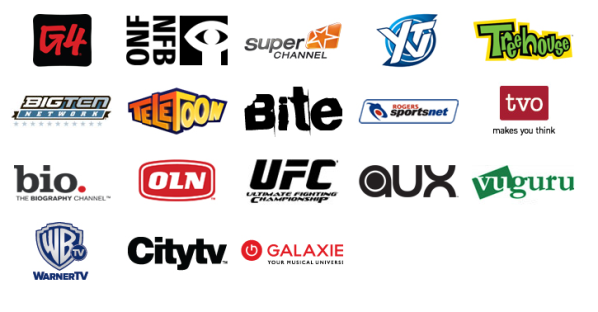 Channels available at Rogers On Demand Online. Yeah, that's it.

These are the channels of content available. It may seem random until you break it down:

That last one is in its own category because it’s where the only cool stuff I’ve found so far comes from. The West Wing, Babylon 5, ER, Whose Line Is It Anyway and CHiPs. That, plus the kids programming and a few other shows like Cougar Town, Ugly Betty and Extreme Makeover Home Edition are about as good as it gets. 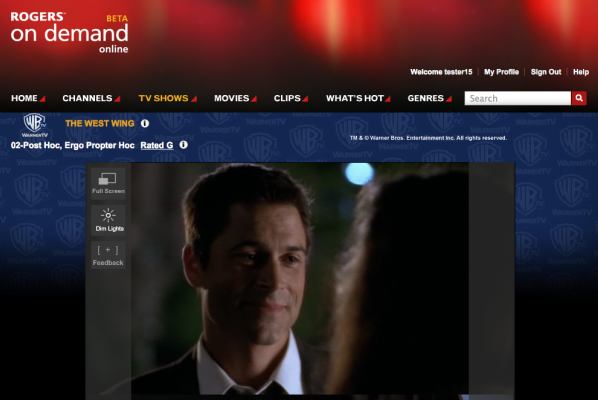 The West Wing in the Rogers video player

And even with its small TV library, you only get a half-dozen episodes of each series. Rogers says it plans to expand that number, but the impression is it could take months or even years to build a respectable library. For now, you can watch the pilot episodes of the West Wing and Babylon 5, but not much more than that.

Oh, and by “you”, I mean paying customers of Rogers Cable or Rogers Wireless. You see, this isn’t a free service like Hulu, it’s free only for Rogers customers. And some specialty content (including Big Ten Network, Sportsnet and YTV) is only available if you use Rogers for television service and if you subscribe to those channels.

(And for licensing reasons, you can only access it if you’re in Canada.)

Since Rogers cable isn’t available in Quebec, that means a lot of stuff is going to be permanently off-limits to us. (I’m a Rogers Wireless subscriber – though not a proud one – so I’d get in on the basic form of this service once it launches.)

This is an unfortunate sign of the future of online video. Rather than being able to choose which online video service you want, or being able to see video directly on the website of the content creator, Canadians will be forced onto either Rogers, CTV, Canwest or other big portals, even by websites in the United States. And with much less CRTC regulation on the Internet (which is mostly good), they can use whatever anticompetitive methods they want.

Despite the lack of regulation, Canada’s broadcasting web portals are becoming copies of the broadcasting television stations: giant bank accounts that pay through the nose for U.S. programming, package it with cheap, crappy homegrown stuff and make sure that the only way we can access what we want is through them.

Beyond crapping all over Rogers for having an anemic video library, I should also offer a technical review of how the website works. I’d critique the technology used for actually streaming the video, but it’s not Rogers technology. Like Canwest, Rogers outsources this to a U.S. service called The Platform. With the latter’s help, any brain-dead monkey with a big bank account can setup an online video site. If you’ve been to the Global TV website to watch an episode of House, you know how the basics work there (especially with the commercials, which are just as repetitive at Rogers). 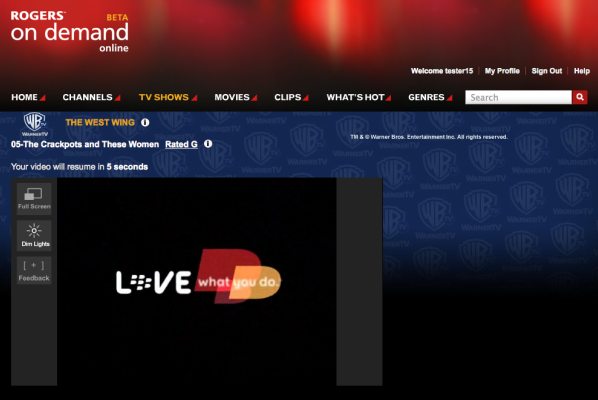 Commercial is off to the side for some reason

Still, there were a number of glitches as I browsed around. It would jump to a commercial in mid-sentence. And the commercials are off to the left for some reason, while the videos play in the centre. Occasionally I’d get “the selected item is not currently available”. A lot of 404 errors.

There were some annoying things too. The titles of all the pages are Google-juiced, even though this is a walled garden and there’s very little point in SEO. “Free TV Shows, TV Series, TV Episodes” and “Watch [SHOW NAME] for free on Rogers On Demand Online” are incredibly unhelpful titles, especially if I want to bookmark something. 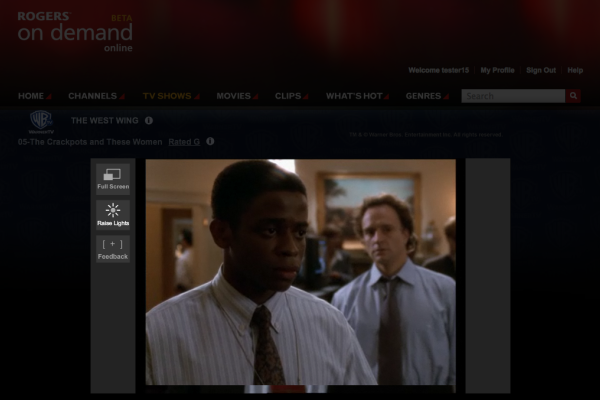 "Lights down" mode is only kind of helpful

Among the in-video options is “dim lights”, which makes the rest of the window darker (so as not to distract from the video). Unfortunately, it doesn’t do anything to the browser itself, which means you still get those distracting elements. 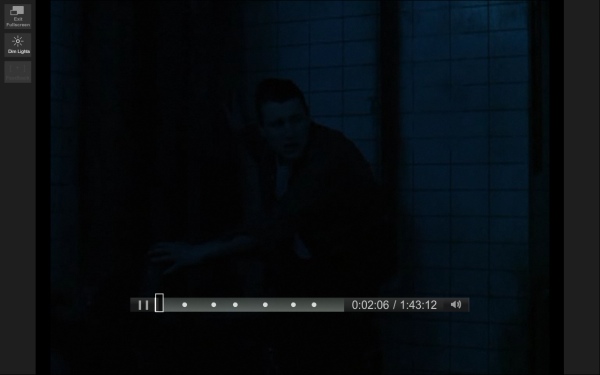 One way around that is fullscreen mode, which does as you’d expect. The controls disappear (though not the cursor, annoyingly). But this is where you start to notice that this isn’t exactly HD.

Digital Home gives actual numbers (480kbps), and says there wil be an option for higher-quality video, but for now it’s a bit less than you’d get with a standard-definition television. That’s fine for a small window in your browser, but it really shows in fullscreen mode. For a free service, I wouldn’t care, but if I’m being asked to pay for this…

It is by no means required, but there is no room for user interaction here beyond choosing videos. No comments attached to individual episodes (there’s a button for “feedback”, but that seems to go to Rogers, not to the public), no way to bookmark or favourite episodes, clips or shows (beyond your standard browser functions) and the videos stop working if you leave them and come back later (say, after putting your laptop to sleep) without any way of marking your point in a video to resume it later.

And there’s no way to embed videos onto a blog or Facebook page or any of that. They say they’re working on it. But when most people wouldn’t be able to see it anyway, what’s the point?

These are problems shared by the other Canadian TV video portals, but it’s noteworthy that Rogers hasn’t added an obvious improvement on the others.

And, of course, it goes without saying that there’s no way to download these videos to put on your iPod or other portable player. Rogers negotiates the rights only for streaming.

In a nutshell: it sucks

Technically, Rogers On Demand Online is an adequate video portal. Its library is pathetic, and it remains to be seen if the company can do something about that quickly. Its features beyond video watching are practically nonexistent (that’s not a dealbreaker mind you – other features would just be icing on the cake), and because of the licensing handcuffs that Rogers has to wear to bring anything good online, there’s very little you can do with the videos.

In short, Rogers On Demand Online is a poor cousin of the CTV and Canwest video portals (mostly because CTV and Canwest have greater television empires and have negotiated for better hit U.S. shows). Except Rogers restricts access to its own customers.