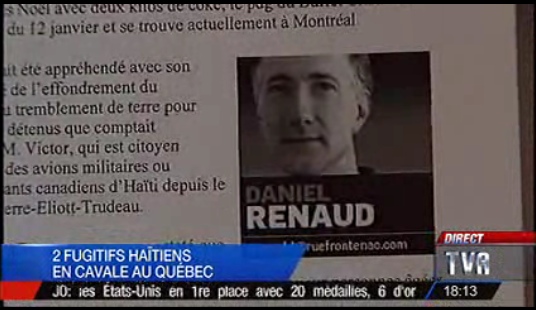 LCN’s website posted a story yesterday about Haitian prison escapee sneaking back into Quebec with evacuees. The Rue Frontenac kids protest that they broke the same story 10 days ago and the LCN story doesn’t mention them, saying only that “au cours des derniers jours, des journalistes montréalais se sont aussi intéressés à cette affaire.” (TVA and the Journal de Montréal are both owned by Quebecor, which has a reputation for not allowing its media assets to report anything that might put another in a bad light.)

In the video, though, which aired on TVA’s 6pm newscast Friday evening, you can see about the 1:40 mark a whopping two-second shot of Rue Frontenac’s website, focusing on the face of locked-out journalist Daniel Renaud. If you freeze-frame, you can even see the website’s address as part of his email underneath. (No mention of Renaud’s name or Rue Frontenac is made in the piece.)

So now locked-out Journal de Montréal journalists can say that the address “ruefrontenac.com” has appeared on TVA.

2 thoughts on “Rue Frontenac on TVA”