It’s hard to believe, but there are people out there who are more nerdy about public transit than I am.

Take the folks at Transportation Research at McGill (TRAM). They don’t just do this as a hobby, chasing after buses with their cameras. They actually study public transit, and their work has results.

When the STM decided it would make a lot of sense to setup a limited-stop express line on St. Michel Blvd., it partnered with TRAM to perform some serious analysis of the plan.

TRAM first used data about existing passengers on the 67 line to estimate time savings in this rather academic-looking document (PDF), even providing different scenarios of where the 467 should stop for maximum efficiency.

After the 467 was put into service, they went back and looked at the average run times for both the 67 and 467 after implementation, and asked passengers to fill out a survey (PDF).

I became involved after the 467 service’s implementation on March 30, 2009. [Professor] Ahmed El-Geneidy and I evaluated the accuracy of the previous estimatess, quantified times savings, and assessed customers’ satisfaction. We finished the study at the end of July 2009. The study that we have done is unique and is opening a new field of research; therefore, no comparable study presently exists.

As for the results, the estimates were 11% to 19% savings for run time on route 467, and the actual ones are 13%, which is in the expected range. Savings could have been higher without the introduction of the OPUS card, an electronic payment system that slightly slowed boardings. Still, the STM made some improvements to the payment boxes in order to speed up boardings; also, people now have had some time to adapt themselves to the new system. The trip on route 67 originally took 35 minutes, which decreased to 34 minutes after the implementation of route 467. Route 467 run time is 31 minutes (savings of 4 minutes 20 seconds). 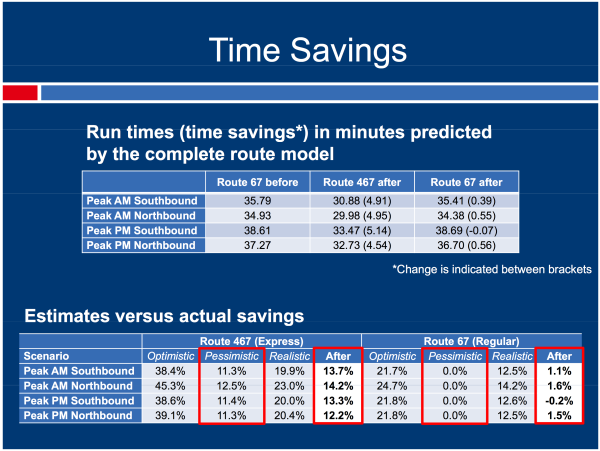 Surprenant-Legault theorizes (correctly, I believe) that the major reason the improvements weren’t as high as predicted was because of the introduction of the Opus smart card between the before measurements and the after measurements. As I’ve written about before, the Opus card and magnetic-stripe card require additional seconds for each passenger, either to hold the Opus against the reader or insert the card into the slot, wait for it to read, print out a validation and then spit it back out. Instead of passengers boarding two seconds apart, they now board five or six, making the whole trip slower.

One interesting finding in the study is about passengers’ perception of time savings:

If we assume this same phenomenon could be replicated on other lines, it means making a lot of passengers happy with not much investment.

You can get more about this study from this presentation (PDF) given by Surprenant-Legault.

Transportation Research at McGill hosts weekly seminars about transportation issues. Surprenant-Legault kicked off the winter 2010 session with the presentation mentioned above. The last one of the season is Thursday at noon, featuring Sébastien Gagné, Kevin Beauséjour and Jocelyn Grondines of the STM’s planning department. The presentation is in Room 420 of the Macdonald-Harrington Building on McGill’s main campus, and is free and open to the public.

3 thoughts on “The transit nerd express”