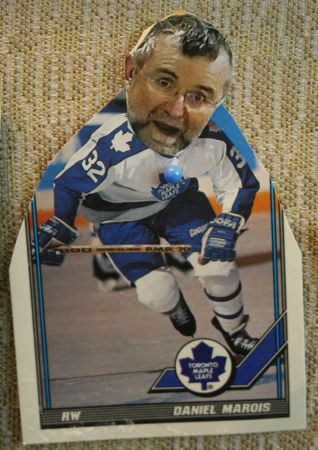 I didn't know Mike King played for the Leafs...

Mike King, a business reporter for The Gazette, died early Sunday after suffering a brain aneurysm on Friday night. He was 51. 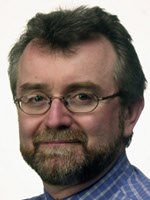 The first email came in at 10:56am Saturday morning: “please call me,” read the subject line from business editor Bryan Demchinsky. The body explained briefly what happened: Mike King had a brain aneurysm and wasn’t expected to survive.

‘News spread quickly, even on the weekend. By the time I got into the office, people were calling, emailing and otherwise communicating with each other, trying to get details.

Unfortunately, they were hard to come by. We didn’t even know what hospital he was in. People in the know were there and didn’t have cellphones. Everyone else was in the dark.

By late afternoon we got some more details: King wasn’t going to make it. He was on a respirator, his last rites had been given. All that was left was to arrange for organ donations before pulling the plug.

It’s a fact that journalists care more about their own than about others. We know it’s not fair, but it’s just the way it is. If a reporter dies, there’s going to be an obituary written. The only question is how long.

But there were two problems on Saturday night. First, it wasn’t clear if King would technically be dead by … you know, deadline. Second, the only reporter left in the office was a young night reporter who didn’t know King very well, and those who did know him well were hard to contact.

The obit was held for a day. It would probably be official by morning, and so the story would go into Monday’s paper. The reporter had a reprieve from one of the most uncomfortable jobs a journalist can do. Unfortunately for her, she was back on the job the next day, so she was still the one who would have to write it.

I shouldn’t have to explain what it’s like to hear that someone who had no symptoms of disease has suddenly died. I’m sure most of you have experienced that at least once. As journalists, we see it on a daily basis. We cover violent deaths, people who die in car accidents, in fires, natural disasters, homicides or just random acts of catastrophe.

And yet, it was shocking. There was no indication – zero – that King had a ticking time bomb in his head waiting to go off, even just a few hours before when he was at work. By the time symptoms showed, he was rushed to hospital, but the affected area was too deep in his brain, and the doctors couldn’t help him.

Deadline (it’s unfortunate there’s no other word for that right now) was still an issue for everyone on Saturday night, so the job went on. Pages were being edited with stories about the World Cup in sports, the Canadian Grand Prix in its own special section, and the news of the day in the small Sunday A section. Stories about King would come up, and though everyone knew him as a nice guy who liked to tell dirty jokes, none of those present knew him well enough.

Some discussions would be about sudden death in general, about the fatality rate of aneurysms, and the other stuff people become curious about in cases like this.

I didn’t know King very well myself. The best memory I have of him dates back almost five years now, to when I was an intern at the paper, and some fellow interns had gone out with him after a party and learned about the tawdry office gossip that everyone older than us already knew about. It was a fun night with a fun guy.

For some reason, I didn’t fully believe he had died until I read the obituary, which was put together on deadline Sunday by night reporter Monique Muise. She was an intern only last year, and didn’t have memories of the man beyond the times he would come up to her desk and say hi.

Writing the obituary, talking to the people close to him (including his wife), and being nervous about getting something wrong made this the hardest story she’s had to do in her brief career, she told me afterward.

I don’t doubt it. Stories like this are why I prefer copy editing to reporting. 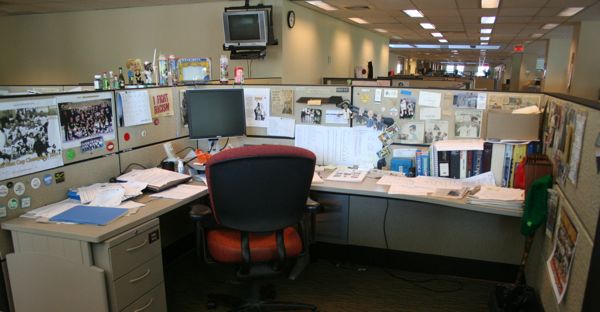 The cubicle belonging to King looks just like any other. Papers strewn about in a mess, and lots of stuff tacked onto the little half walls: There’s pictures from his hockey teams with colleagues printouts of Aislin cartoons that reference stories he’s written, bobbleheads (including one of the Expos’ Andre Dawson), mini liquor bottles and “gray hair pills” on the ledge separating his desk from his colleagues. Headlines with the word “king” in them are pinned to the wall. A mostly empty glass of water sits beside the computer monitor.

Among the papers on the desk is a printout of a booking confirmation for a seat on a train to Windsor, Ont., on June 29.

Everything about it looks like the desk a reporter has left for the weekend and intends to come back to on Monday. But that won’t happen.

I don’t know what the procedure is. I’d like to think this is rare enough that one hasn’t been thought up. But someone will eventually have to clear this desk out. I’m glad it’s not me, and that I probably won’t be there when it happens.

There was some debate over how much attention to give to King’s obituary. News came up to the desk from classified on Sunday that there would be a full page left over in the obituary section, which would be perfect. King’s obit could go there, maybe even with room for other obits from wires, as are usually used to fill that extra space next to the paid obits.

Unfortunately, to make room for the Grand Prix section on the presses, the classified section had to be printed in advance, which means that page would need to be typeset by 5pm. That simply wasn’t going to happen, so the obituary page would have to be filled with a promo ad and King’s obit would go in the A section. 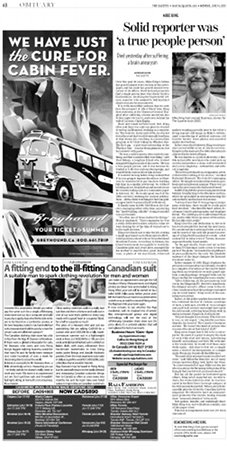 King's obit appears on Page A8, taking up as much room as possible

King wasn’t a star columnist (the closest thing we had to a columnist logo pic was taken back in 2001). He wasn’t going to get an obit in La Presse, Le Devoir or other local media. But this was his paper, he was part of the family, and this wasn’t going to be buried here. He’d get a long obit, and it would get pointed to from the front page. 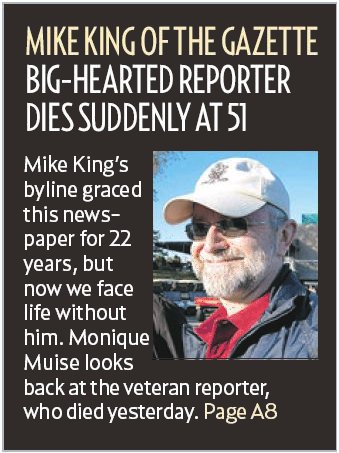 Maybe Muise’s obit was too informal, too personal. There are worse times to throw objectivity out the window.

Skip ahead a few pages from his obituary and you’ll find a story by King. He’d written the Your Business feature, about an organization providing microcredit for allophone women. It was a good, interesting story. But, of course, he had no idea when he was writing it that it would be his last. A note was added to it saying so.

Online, two personal stories King wrote were taken from The Gazette’s archives and posted. One about the lost art of physical letter-writing – and a package he received that security mistook for a bomb, and the other about arranging for his mother to meet Canadiens great Jean Béliveau. The picture of that encounter is tacked to the wall of his cubicle. 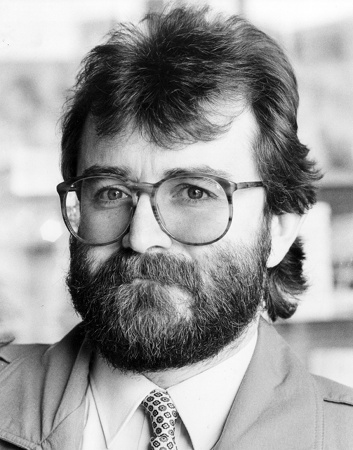 Even though to me he’s barely recognizable in this archive photo, it’s just too awesome-looking not to post.

UPDATE (June 15): CBC Homerun aired an interview with King’s good friend Paul Delean, and Pat Hickey reminisces in today’s Gazette about the reporter he first met as a journalism student 32 years ago.

UPDATE (June 16): The memorial service for Mike King will be held at Saturday, June 19, 11 am at St. Jean Brebeuf Church, 7777 George St. in LaSalle. In lieu of flowers, donations may be made to a favourite charity.

UPDATE (June 21): A bursary has been setup in King’s name at Concordia University.

UPDATE (Jan. 3, 2011): Muise, who wrote King’s obit for The Gazette, writes an end-of-year first-person story about what it was like.

13 thoughts on “Long live the Kinger”