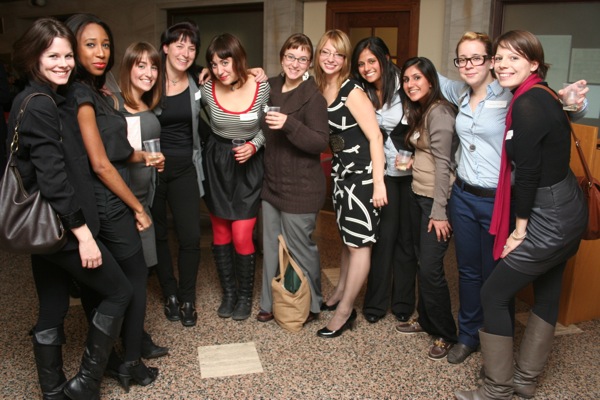 The new award was the Mike King bursary, setup in honour of the Gazette business reporter who died suddenly in June. This is a story in itself – normally an endowment sufficient to distribute annual awards takes much longer than four months to build up, but an outpour of donations from friends and colleagues (including myself) meant the first $500 bursary went out right away. 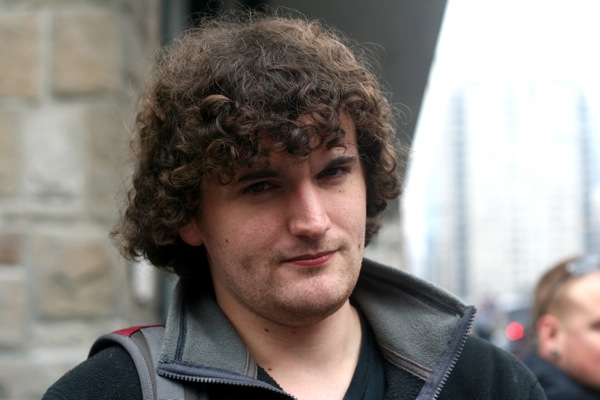 Yes, his name is Michael Moore. And yes, he’s heard the jokes. His teachers see his name and make some funny comment about how they love his movies.

One of the disadvantages to a name like this is that Moore is entirely ungoogleable. I missed him during the awards night (hence why some eagle-eyed readers will notice that he’s photographed in the daylight outside Concordia’s Hall Building a few days later), and attempts to find him online were entirely fruitless. Thankfully we were still able to get in touch.

Moore is in his third year as a journalism undergrad, with some English courses on the side. His goal when he graduates in the spring? “I would like to get a job.”

Permitted to daydream a bit, he says he’d like to become a sports writer, penning long columns (Dave Stubbs, look out). He sees people like Peter King of Sports Illustrated as role models.

But he knows he’s not going to start out as a high-profile columnist, and he’s ready to start small.

“I’m willing to go to (small towns), like Mike did, if that’s what it takes” he said, noting the career path of the man whose name is attached to his bursary. Mike King worked in Windsor, Ont., Kelowna, B.C. and other small towns in western Canada before getting his dream job at The Gazette.

Lew Harris was a reporter and later a copy editor at the Montreal Star and Gazette until he died of pancreatic cancer in 1999. He had, according to his Gazette obituary, a “quick, dry sense of humour and a hidden flair for whimsy.”

Married to reporter Marian Scott and the brother of copy editor Leon Harris, Lew covered politics and crime in his reporting days, and started up some controversy in the 1984 Canadian election campaign when he noticed Liberal leader John Turner had a bum-patting habit.

The bursary started shortly after Harris died. Its first winner was a Concordia journalism student by the name of Caroline Plante. Plante is now the National Assembly reporter for Global Montreal. 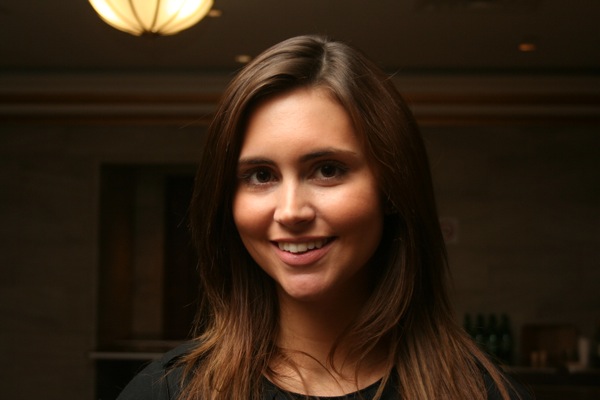 Journalism student, fluently bilingual, magazine writer, former Alouettes cheerleader. Guess which of these raised eyebrows when it was brought up during the awards ceremony.

But Lalancette was a bit surprised when she heard this tidbit mentioned while her award was presented. The introductions are done mostly based on each student’s application, and Lalancette purposefully didn’t mention her cheerleading on hers.

Not that she wasn’t proud of her past – cheerleading at that level is a lot of work and takes a lot of practice – but she feared that this information might contribute to prejudice against her.

Lalancette has already gotten some real-world media experience under her belt as a contributor to Loulou magazine. Born in Sherbrooke but raised in Montreal, she’s fluently bilingual and writes in both languages – a huge asset in the Montreal media environment.

As for her future, she’s still unsure. “That’s a big question now that I’m graduating,” she says. She might want to apply to Columbia University to continue her studies, or be a feature writer about social issues (a common theme among the award winners tonight), or continuing to write about fashion and beauty.

But she’s not planning to go back to cheerleading anytime soon.

Susan Carson was a feature writer and columnist at The Gazette from 1979 until 1988, when she died of complications following brain surgery.

“Carson was a champion of the poor, the abused, the disabled,” The Gazette wrote when the fund was established. “She took their problems to heart and wrote about them; her stories appeared in The Gazette as well as in other Canadian publications.

“Readers responded with jobs for those who needed work, shelter and clothing for people who had lost their homes and opportunity for those who had lost hope. They identified with her loving and gently humorous columns about her family and how she managed to juggle her job with her role as mother and wife. And they were strengthened by the determination of brave, sick children she wrote about, the dignity of mothers on welfare trying to raise families or the resolve of people who refused to allow disabilities to get in the way of productive lives.”

Carson, who was married to John Kalbfleisch (now the Second Draft columnist) wrote a column about life as a working mother. 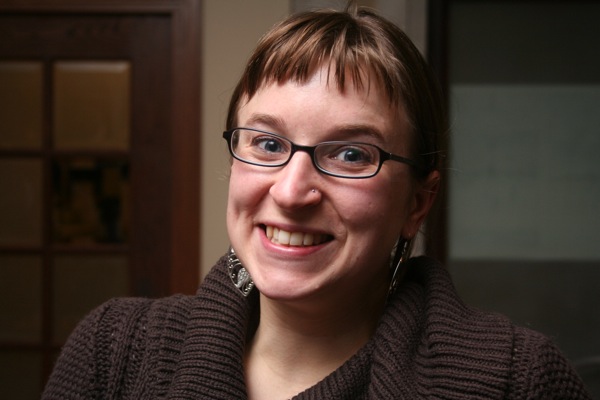 Mel Lefebvre is definitely an idealist. The Montrealer’s bachelor’s degree is in environmental science, and she just started up a Concordia chapter of Journalists for Human Rights (it’s on Facebook). Her dream job isn’t as a general assignment reporter, but as a communications director for the David Suzuki Foundation. Failing that, she’d be happy with a feature writer job at National Geographic.

“Cheesy, but … yeah,” she admits, acknowledging that neither dream is particularly likely.

Still, her goal is to change the world for the better, and “hopefully journalism is the right tool,” she says.

Among previous winners are Catherine Solyom and Ann Carroll, both of whom went on to become reporters at The Gazette.

The bursaries are given out annually to two Concordia graduate diploma students. 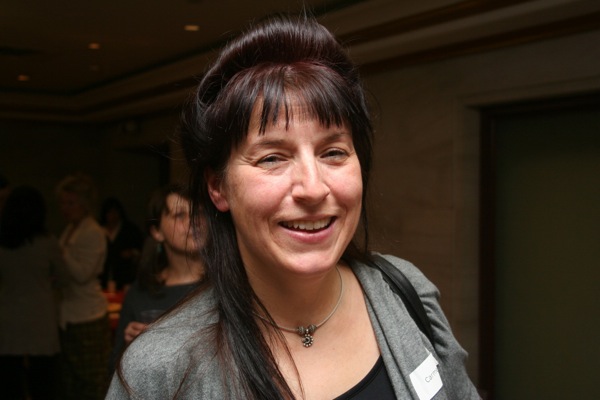 And she quit that to go into journalism.

“Do I want money, or do I want to enjoy getting up in the morning?” she asked rhetorically. Deciding that she preferred to change the world, she enrolled in Concordia’s journalism graduate diploma program, where she’s the … umm … dean of the class. And by that I mean she’s surrounded by relative children.

The former design art student says she would like to go into radio documentary. But, like her colleagues, she’ll take what she can get. 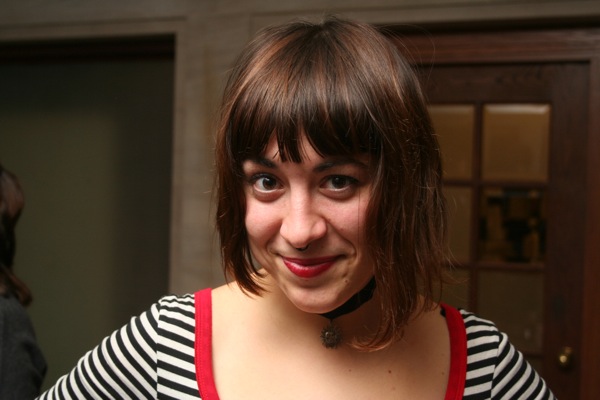 “I actually care about things,” Meagan Wohlberg says about her desire to change the world.

Wohlberg grew up in northern Saskatchewan and studied philosophy and English in her undergraduate years at the University of Saskatchewan.

“I want my career to mold to my politics,” she says. She wants to give a voice to the voiceless, to help people who are disadvantaged tell their own stories, and she rejects the idea that all stories must be balanced. “I think there are ways of giving a balanced view” without giving equal time to sides that are illegitimate.

She says she’d see herself working for an alternate, online publication, combining social work with journalism.

“I don’t think there’s a person who doesn’t have a voice,” she says. 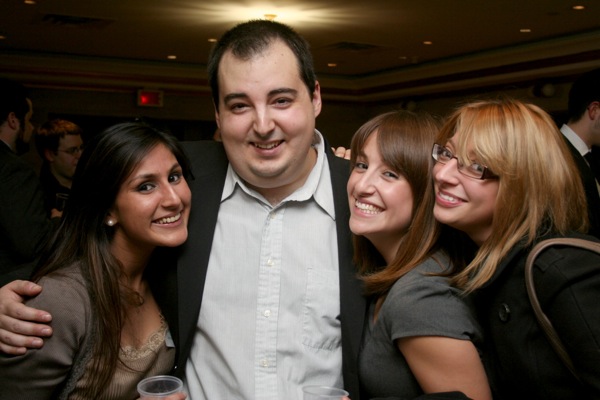 Three adorable Fagstein fans gather around my chins for a photo

Though the two undergraduate winners were informed of their bursaries in advance, the entire graduate diploma class was brought in and their wins were surprises.

When I started interviewing the winners, a few of the non-winners got a bit testy with me, wondering why I wasn’t interviewing them. I felt bad. I mean, I didn’t want to exclude anyone, but I didn’t have time to interview dozens of journalism students about their futures.

I especially felt bad when I found out they were fans of this blog. So, hi there. At least you get your photo on my blog.

(Don’t feel too bad, though. When these awards were handed out in 2004, I was one of the students present, and I didn’t win anything either. So some day you might grow up to become a sarcastic blogger too!) 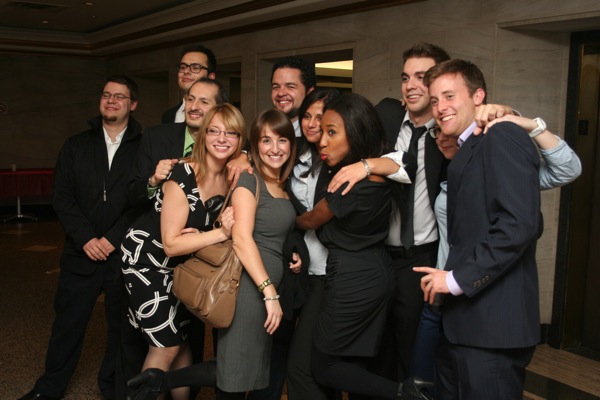 There were guys in this class too.

22 thoughts on “The journalists of tomorrow”