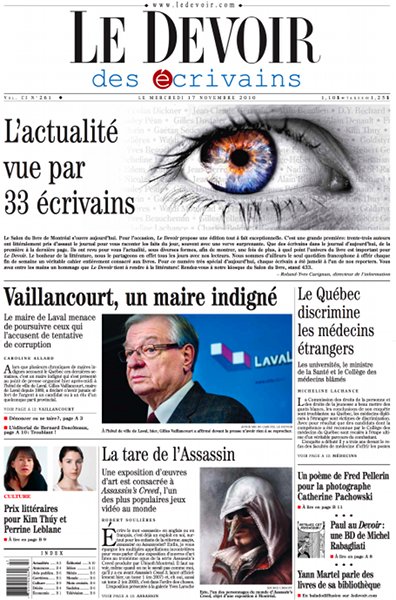 In an effort to honour authors as the Salon du livre opens (and we’re in the middle of book awards season), Le Devoir hands over today’s issue to 33 authors.

The authors (including Dany Laferrière, Caroline Allard, Fred Pellerin and David Homel) were paired with Le Devoir’s journalists for the day yesterday – an activity chronicled in a two-part liveblog and photo gallery.

Though Le Devoir is one of the few remaining publications in Canada to use a paywall, all the authors’ pieces are currently free online. You can see them listed here.

There’s also a cartoon by Michel Rabagliati and a podcast of interviews about the issue (with bonus sounds of a fake typewriter in the background).

7 thoughts on “A writer’s newspaper”