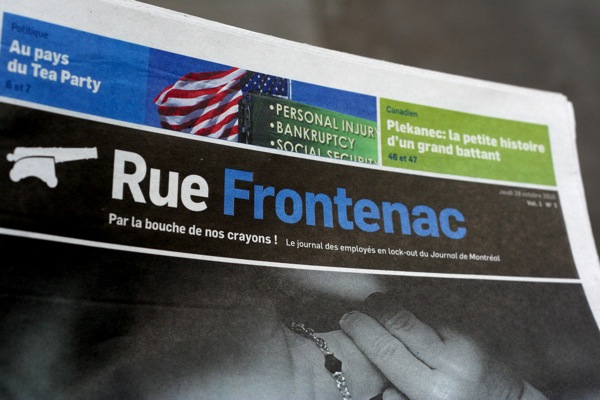 Rue Frontenac has been publishing weekly since October

Citing an unsustainable business model that was based on advertising revenue that never materialized, Rue Frontenac coordinator Richard Bousquet announced on Wednesday that the publication of formerly-locked-out Journal de Montréal workers will no longer be publishing a weekly printed edition.

Rue Frontenac has published weekly on Thursdays since October. Small, squarish, with all its pages in full-colour and very little advertising.

When I talked to Bousquet in January on the anniversary of the lockout, he said that advertising was starting to pick up, and that the big problem was that so many marketing companies plan advertising campaigns months in advance, that they want the stability of a paper they know will last that long. Bousquet mentions in his piece that large companies and even governments prefer to deal with ad placement agencies for the sake of simplification, and that made it difficult for Rue Frontenac.

Though it was played down at the time, there was also the nervousness from some businesses about antagonizing the Journal de Montréal, something that was expected to end when the lockout was ended with Quebecor apparently blessing the continuation of the newspaper and website.

In the end, though, I think the biggest problem goes to the larger problem of Rue Frontenac’s business model. Not only do they have far more journalists than they can afford, but they’re trying to squeeze into the most overserved market in Canada: Francophone Montrealers. They’re fighting against five daily newspapers, including two free ones that are handed out every weekday morning outside metro stations. Rue Frontenac, meanwhile, is distributed like an alternative weekly, with distribution points in bars, supermarkets, restaurants and random places where the papers can easily be forgotten or missed among the dozens of others vying for attention.

So now Rue Frontenac will focus its efforts on its website. Bousquet notes that it’s growing in popularity – if not so much in advertising revenue – and there are no plans to end that part of the project.

But part of the idea behind a printed edition of Rue Frontenac was to provide enough revenue to at least partially subsidize the work of journalists who report online.

Now they’ll have to find some other way to make money. Even though the lockout ended more than two months ago, Bousquet and his team are still trying to figure out a viable business model.

If I can offer one piece of advice, the most important move they will make in that direction will be finding a niche audience that is willing to give them a lot of attention or a decent amount of money. Billing itself as a generalist news publication that’s just better journalism than the Journal de Montréal isn’t going to work in a market that has Le Devoir, La Presse, Radio-Canada and others.