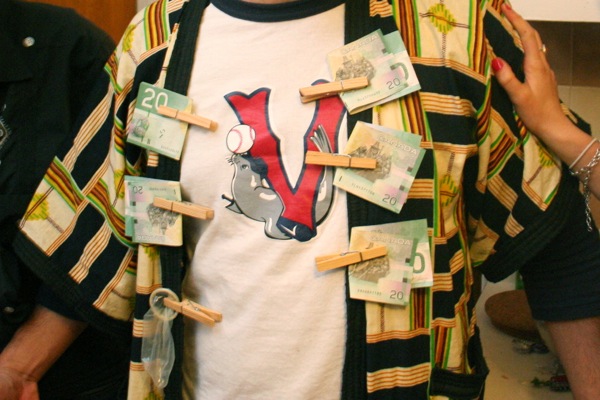 I'm giving away some of these (the money, not the condoms)

To celebrate yet another year of employment, I’m giving away some of my money again.

And as in previous years, your participation does not involve you spending any money, just helping to inflate my ego a little bit.

In the past I’ve given to Dans la Rue, the Welcome Hall Mission and the Old Brewery Mission. Now all of them are annoying me regularly with letters in the mail, which I find annoying not because they’re charities asking for money but because they’re wasting so much on printing and postage. It just seems weird that there’s someone who has gone through the calculation and determined that this money needs to be spent to get people to donate.

This year, I was told by my boss that I’ve reached the five-year rate of pay at work. Under the current collective agreement, that’s the maximum rate, even though I’m still a part-time temporary employee whose future there isn’t at all set in stone.

While I could use some more job security  … and my own weekly column too, while you’re at it, imagination … my bank account can attest to how much I’ve benefitted from these people paying me to do something I enjoy so much, so I’m giving back by sending my big donation to the Gazette Christmas Fund. Or The Gazette Christmas Fund. I’m still debating whether the “T” should be capitalized.

Anyway, here’s how it works: I’m going to give $1 of my own money for every new (legitimate) follower to my Twitter feed between now and one week from today (Dec. 21), and $2 for every new subscriber to my RSS feed. The former is currently 3,816 and the latter is 1,196 (though I don’t know how reliable that Feedburner count is). And to save myself going bankrupt in case this goes super-viral, there’s a combined limit of $2,000, which I can totally waive if I feel like it, because I set the rules, man.

So go forth and sing my praises, and together we can give away a bunch of my money and make me cool at the same time.

And if you insist on donating your own money, go ahead. I’m not going to stop you.