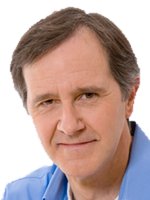 Dave Bronstetter, the veteran CBC Montreal personality who was most recently the host of radio’s All in a Weekend, is hanging up the microphone after more than three decades in broadcasting.

The announcement was made Saturday morning on his show by Sonali Karnick, who has been replacing Bronstetter. Bronstetter has been on leave from his show since last fall for reasons that haven’t been made very clear publicly.

Karnick said Bronstetter will return to do one final show with her on Feb. 18. They will be running some best-of clips between now and then, and have asked listeners to send in their favourite memories and leave goodbye messages for him.

Most Montrealers will associate Bronstetter with his long stints as host of weekday shows Homerun (in the late 80s) and then Daybreak, from when Royal Orr left 1996 until 2006, when he stepped away from a five-day-a-week job to take the reins at All in a Weekend.

At the time, Bronstetter said burnout and fatigue we having serious effects on his health.

I’ve been asked a few times over the past few months about why he’s been on extended leave. Bronstetter himself has been asked about it a lot as well, at least through posts on his Facebook wall. In response, he’s been mostly vague, saying he hopes to come back soon and he’s getting better by the day.

Bronstetter just celebrated his 59th birthday, though his Facebook profile has him listed as being born in 1905.

The announcement didn’t include news about Bronstetter’s permanent replacement at All in a Weekend. Karnick left her job as sports reporter for Daybreak to take up a job at CBC Sports in Toronto. She was recently brought in as the interim host of All in a Weekend, supposedly until the end of the season. Karnick would be an obvious choice, assuming she’s interested in staying.

UPDATE: A story from The Gazette, which confirms no permanent replacement has been chosen but Karnick will continue until the end of the season. The news was also mentioned on CTV’s local newscast.

UPDATE (Feb. 6): Brendan Kelly, who worked with Bronstetter as a regular contributor to Daybreak, talks to Bronstetter, who confirms he’s leaving on the advice of his doctor because he’s burned out and depressed.