The Beat gets some dance help for its entry into the St. Patrick’s parade.

This year was the first time I’ve gone to a St. Patrick’s parade in Montreal without volunteering in some way, either by working for the parade itself, or (as I did last year) taking pictures for a friend.

I figured out last year what a gold mine it is for taking photos of local media personalities. The local radio and television stations are well represented at the parade, each seeing it as a good opportunity to connect with their audiences, do some marketing in front of tens (or even hundreds) of thousands of people and in general have a good time. So long as I have a good view, I can pick a spot, attach the long lens on my camera and get shots of dozens of people as they slowly roll past. Now I have lots of photos to use as file shots when someone gets fired/promoted/arrested/quits/dies/etc., or just for people to caption. 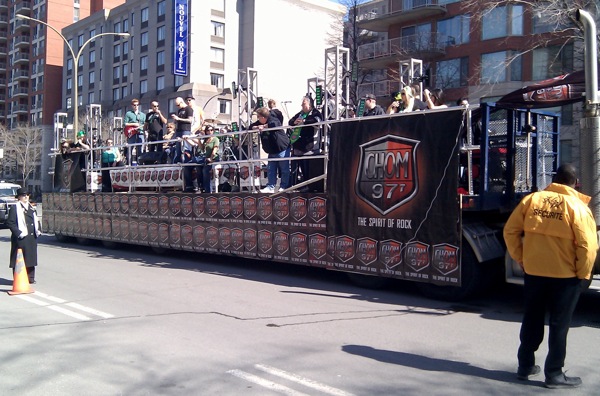 CTV, CHOM, Virgin Radio and CJAD had floats on flatbed trailers (CTV’s was voted best media float, but I have to give CHOM credit for actually playing live music on theirs), CBC borrowed the Hurley’s float for their people (I missed that float, sadly, but their flags were everywhere), The Beat had a big ad truck that its personalities walked behind along with a dance troupe, and TSN Radio and Global had convertibles with personalities sitting in the back. 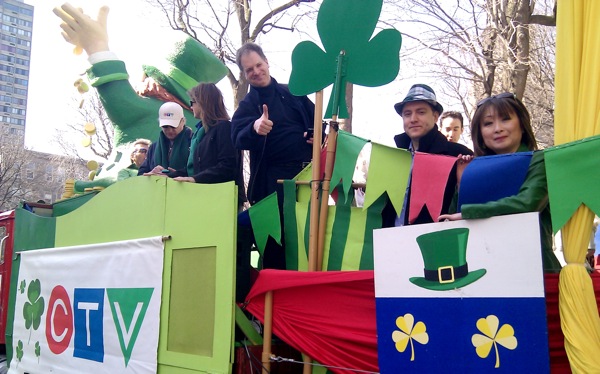 Stéphane Giroux gives a thumbs-up from the CTV St. Patrick's float, which also had live dancers 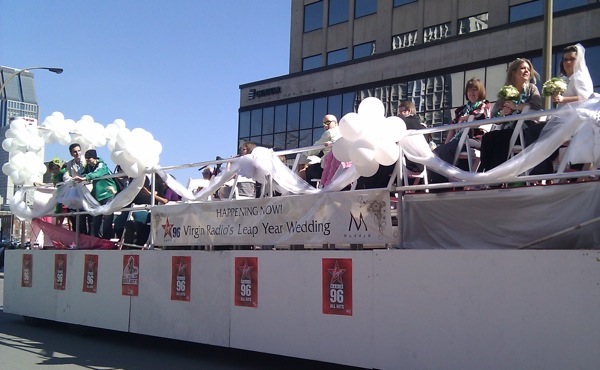 Virgin Radio had a live wedding on its St. Patrick's parade float, though the whole "leap year" thing is kind of old, and it's something you can only do once in front of a small part of the parade crowd.

But if you’re looking for Montreal’s francophone media personalities, you’re really out of luck.

Among francophone media, I counted all of two vans – one for CKOI and another for Rythme FM. Both are Cogeco stations and their vans were kind of thrown in along with the Beat’s entry. Unless they were travelling incognito, neither had on-air personalities present. 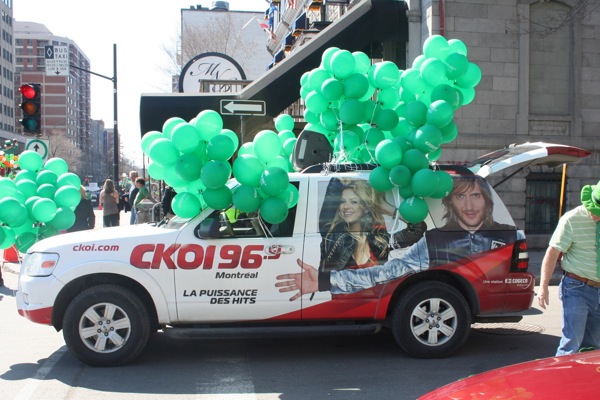 TVA, Radio-Canada, V, Télé-Québec, NRJ, Rouge FM, 98.5, CKAC, MusiquePlus, CJPX, the list goes on of francophone media who are based in Montreal who had no presence at the parade. I’ll exclude print media because anglo print publications weren’t present either. But I didn’t see any ethnic media present either.

I don’t want to point fingers at any individual broadcaster, but when all the anglo ones go through great efforts and the franco ones couldn’t seem to care less, you know there’s something going on. Clearly this parade is seen as being an anglo one, just like the St. Jean Baptiste parade is seen as being francophone, even though both at least pretend to reach out and welcome anyone who wants to participate.

Part of the blame lies at the feet of the United Irish Societies of Montreal, which organizes the parade. It’s clearly an anglophone organization. Its website isn’t even available in French, which is kind of surprising for something based in this city. I won’t go all Dutrizac over them for it, but it’s hard to pretend you’re welcoming to francophones when you don’t communicate in their language.

I asked UIS about this. Sharleen McCambridge, their VP of public relations, answered that they’re a volunteer organization and “there is certainly no target except for anyone interested in the Montreal St. Patrick’s Day Parade and the Irish Community.” She said their newly redesigned website has a French version “in development right now and expected to be launched very soon,” presumably well in advance of next year’s parade.

“All media French and English are invited to all activities leading up to and including parade day. I think that if you check this out, you will find news releases, articles, websites, live interviews as well as printed publications. This takes a lot of coordination from our resources.”

She’s right. Francophone media did, in fact, cover the parade as a news story, even if they didn’t participate.

“We do not have language restrictions in the parade as we are not a business, we are not political and we are celebrating our Irish heritage in many languages including Gaelic, English, French and even Polish.”

I don’t know how much Polish there is, but it’s certainly very English.

I’m not going to come too hard on an organization made of volunteers, but for all the organization that went into the parade (including increased security to make sure nobody got too close to floats), it seems a bit strange that making even basic information available in French wasn’t considered a priority.

Maybe I’m making an issue out of something that shouldn’t be one. I’ve never been particularly crazy about media being at parades in the first place. What do they have to do with Irish heritage? For that matter, what do Ukrainian dancers or Total Diving have to do with St. Patrick’s Day? But that battle has long been lost. The parade is less about showcasing Irish culture and more about local businesses getting free advertising by sticking giant shamrocks on the side of flatbed trailers and giving people of Irish descent an excuse to walk around in their top hats.

What gets me most about this is how little effort is required. Radio and TV stations have big marketing budgets. All they’d have to do is show up, put a few personalities in the back of convertibles and – if they’re a music radio station – play some of their music.

I’m not expecting big stars like Véronique Cloutier or Guy A. Lepage to be walking the parade route. And I’m sure Benoit Dutrizac and Richard Martineau wouldn’t have come even if they were paid generous overtime, but were Martin Grenier, Kim Rusk and Patrice Bélanger too busy to spend a few hours with a few thousand spectators? What about Julie Bélanger or the 12 people who do Rythme FM’s morning show? Pierre Pagé, Martin Lemay and Julie St-Pierre of NRJ? Anyone from TVA and Radio-Canada?

It’s hard to imagine an explanation about their lack of presence than these media just don’t care.

Hopefully that’s something that, with help from both sides, we can change. I’ve got plenty of photos taken with Mutsumi Takahashi, but it would be nice to have a few with Véro.