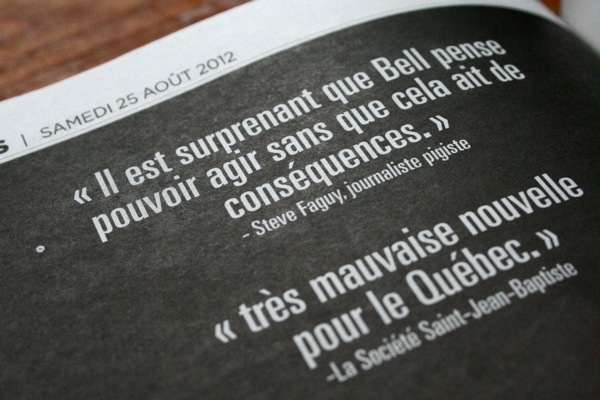 I was in the papers over the weekend. Well, some of them anyway.

As opposition grows over the planned Bell purchase of Astral Media (a new campaign was just launched today), Bell and its opponents are multiplying their use of full-page newspaper advertisements to fight the public relations war. 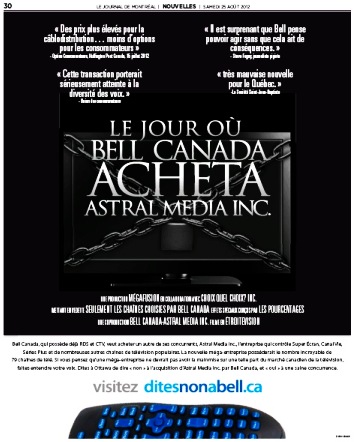 French Say No To Bell ad in the Journal de Montréal

As someone who works for a major newspaper, I can only applaud this large transfer of funds from the telecom giants to my employer. But there wasn’t any such transfer in this case. The ads appeared only in newspapers owned by Sun Media – the Journal de Montréal, the Journal de Québec, the Toronto/Ottawa/Calgary/Edmonton/Winnipeg Sun, and broadsheet papers like the Peterborough Examiner and London Free Press. Quebecor, which owns Sun Media, is one of the three partners in Say No To Bell.

(I asked the campaign about this apparent irony of running an ad campaign warning about the dangers of corporate consolidation only in newspapers owned by related media. I was told the Say No To Bell campaign also includes ads in papers like Le Devoir, the Globe and Mail, the National Post and the Hill Times, though it didn’t address why the ads appeared in Sun papers but not the Globe, National Post or Le Devoir over the weekend. Not that I’m bitter or anything.) 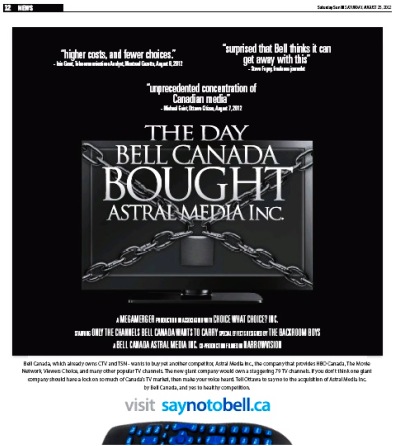 English Say No To Bell ad in Sun papers

The ads, which kind of mock a big movie poster, mocks the “MEGAMERGER” (an earlier draft used the word “MONOPOLY”) in which the “BACKROOM BOYS” will ensure that you get “ONLY THE CHANNELS BELL CANADA WANTS TO CARRY”. It’s topped by quotes from independent parties decrying what such a merger would mean for Canadian broadcasting. One of those quotes is from me.

The quote, “surprised that Bell thinks it can get away with this”, is from my March 16 blog post, published the day the merger was first announced. The quote omits the words “I’m a bit”, making it sound a bit more forceful than it was intended, but I won’t complain about that. The French translation – “Il est surprenant que Bell pense pouvoir agir sans que cela ait de conséquences” – is interesting, and about as true to the meaning of the post as a translation can be.

The sentence might give people the false impression that I’m advocating against this corporate merger, or that I feel it’s wrong. The move is, as I said then, a bad thing for diversity of voices, but it also has some positive benefits, such as reducing inefficiency and increasing competition against Quebecor in Quebec. A multimillion-dollar financial benefits package, required as part of any such corporate acquisition, will benefit independent producers and create lots of new Canadian content.

The big question is what the CRTC will allow Bell to hold onto. Bell has already said it will sell 10 radio stations, and convert CKGM in Montreal from English to French. But the CRTC could set additional conditions, and if I was a betting man, I would guess that they will.

But hey, as long as I got my name in the papers, right? Something for mom to add to her scrapbook.

(You’ll also note, by the way, that a quote appears in the French version but not the English one. It’s a quote from the Société Saint-Jean Baptiste saying the deal is bad for Quebec. I’m sure that difference was merely for geographic reasons…)

8 thoughts on “My first quote in an ad”