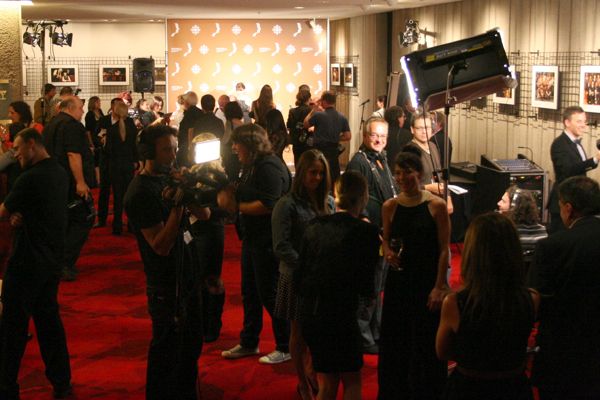 Half of the salle de presse at the 2012 Gémeaux at Place des Arts on Sept. 16

The request came from my editor on Monday, six days before: How would I feel about covering the Gémeaux for The Gazette? Their usual writer for these things, Brendan Kelly, was working a news reporting shift that day (weekend shifts are rotated among staff to share the burden), so he needed a backup. And since I know a bit more about French-language television than the usual Gazette writer, he thought of me. Despite the fact that I was also working a regular shift that day (but in the morning), I accepted. I was just too curious what it would be like. I’ve never covered an awards ceremony before. And I could count on one hand the number of times I’ve written stories on deadline like this. Fortunately for me, the people organizing this event are professionals, and they have it all down to a science.

I got an embargoed list of winners (all but the people’s choice winner, which is voted on by the public during the ceremony). Providing embargoed information to reporters helps them prepare stories on deadline, and is particularly helpful when you have a situation like this where all the information lands so close to deadline. But it’s risky. There’s always the chance that the information could get out, perhaps by an absent-minded editor posting the information online too early, or some spy leaking out the names of winners. The worst-case scenario would have the nominees know the winners before they’re announced. Needless to say, I was sworn to secrecy, and kept the list to myself. I wrote up about half the story during the afternoon. But the rest had to wait until the ceremony. How did the host, Joël Legrendre, perform in his first try? What acceptance speeches were most moving or memorable? What crazy, unexpected things happened? I’d find out when everyone else did. 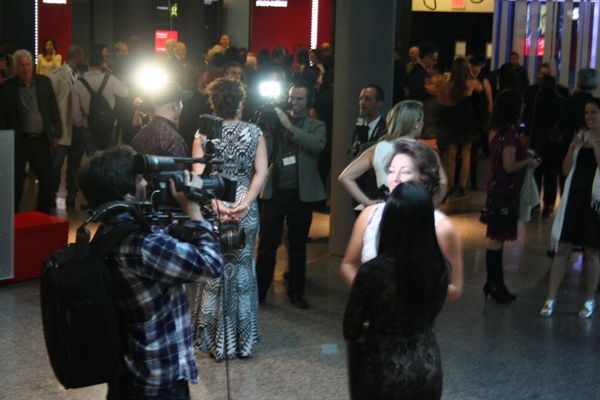 About half an hour before the live broadcast began, I went to Place des Arts. I saw the three stars of Radio-Canada’s Mauvais Karmabeing interviewed in the big hall, which was accessible to the public. I went to a table that looked registration-y and got my media pass. The gala ceremony was at Salle Wilfrid-Pelletier. But I never went near it. Rather than sit in the balcony or in those private boxes or among the stars (which, when you think about it, would be very impractical), journalists were given a spacious area, the foyer just outside Théâtre Jean-Duceppe, to do their thing. 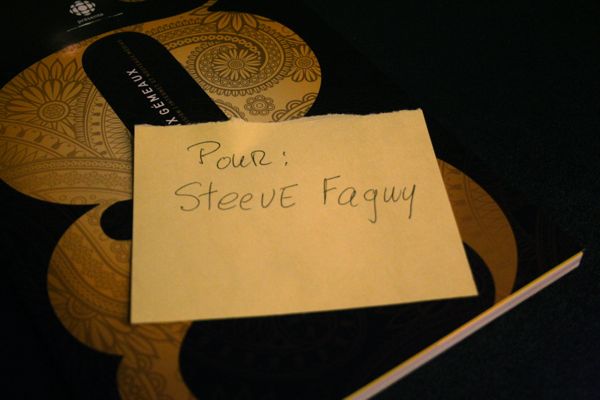 A glossy mag sits at a spot at the print media table, with a little reminder that I’m in a francophone environment.

I sit at the print media table, which I eventually find after looking around a while. In front of it is a large television, where we watch the live feed from the ceremony. During commercial breaks, or any other part we might be less interested in, we can walk around and participate in scrums of the winners, who are brought into the room for post-win interviews.

You realize how much of a finely-tuned process this is when you see how an award winner is put through the steps. First, someone announces through an internal public-address system that a winner is approaching the press room. This becomes a bit annoying during the ceremony because these announcements are really loud and drown out the live feed. So while people are giving speeches or presenting awards on stage, we’re hearing about how the previous winner is almost ready to be photographed. 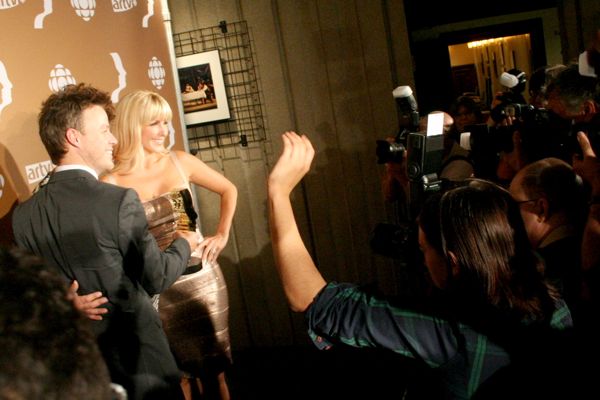 Gémeaux winners (in this case, Louis Morissette, Hélène Bourgeoys-Leclerc and Véronique Cloutier for the Bye-Bye 2011) get photos taken as they walk in the press room.

Photography is the first step. A backdrop with the ARTV, Radio-Canada and Gémeaux logos is well lit. Maybe 20 photographers (some with cameras more professional-looking than others) snap away, looking for the perfect shot of the winners with their trophies. Most prefer to have the winners looking straight at their cameras, so you hear a lot of “ici, s’il vous plaît” and photographers raising their hands. With multiple winners, this becomes an exercise in frustration because they aren’t all looking into the same lens at the same time. 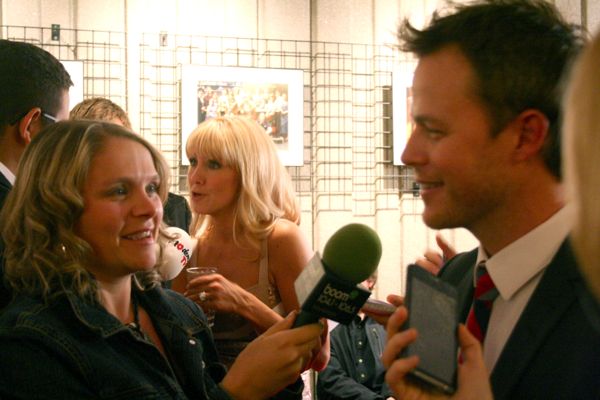 Radio and print journalists scrum the winners to have them say whatever they didn’t have time to say on stage.

After the photos are done, the winners are mobbed by print and radio reporters, who shove microphones and recorders in their faces and ask them questions. This is much less controlled, much more haphazard. And, of course, it varies based on the celebrityness of the winner. Big stars like Véro and Louis (above) get a lot of attention. 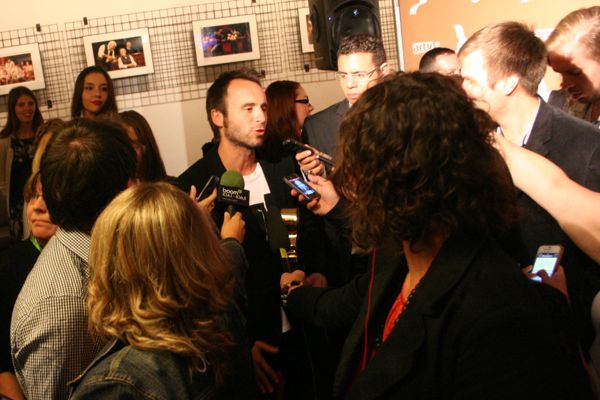 Comedian Louis-José Houde, the first winner of the night, gets scrummed like there’s no tomorrow. He always provides good material, and makes it seem like he’s not even trying. (Maybe he isn’t?) 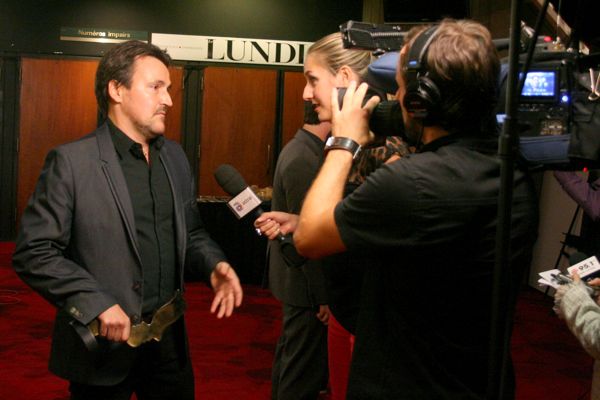 Guy A. Lepage gets interviewed for TV after winning an award for Tout le monde en parle

TV interviews for stuff like this can’t be scrummed like radio and print. They need to be one-on-one, away from the crowd. Fortunately there are much fewer TV reporters. RDI/Radio-Canada has a setup, and there are a few others. It doesn’t take long to get through them all. 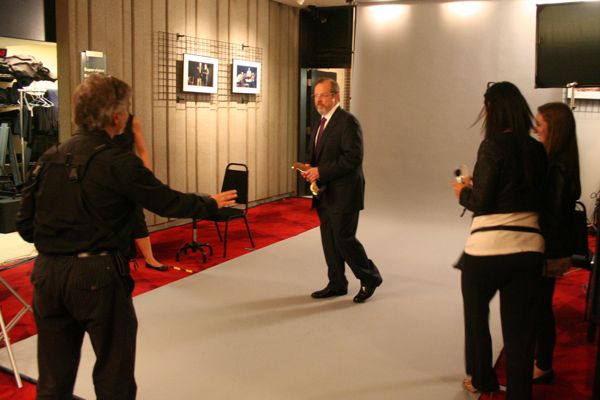 The last step is a step into a studio for a portrait with the trophy. Just one photographer (and assistants), who controls the lights, directs the subject, and has a solid grey background. After a few shots here, they’re done with the press room. The process takes maybe 10 minutes, maybe longer. For someone who isn’t used to it, I can imagine it being a bit overwhelming. 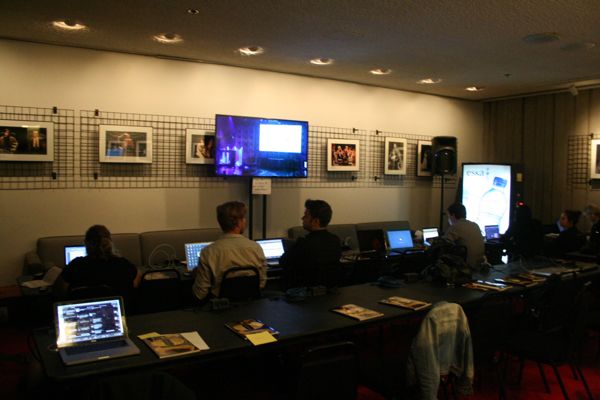 The print reporters’ desk at the Gémeaux press room

Next to the portrait studio sits the print desk. Two long tables, seating about 20 journalists. I didn’t recognize any of them, but noted how young they were. Almost all of them were my age. I might have tried to chat with some of them, but we were all busy watching the show, and getting up to chase down winners. It’s a fascinating process, and very efficient. Most of the time, anyway. One notable problem was at the end. Actress Myriam LeBlanc had just won an award for best actress in a drama (Apparences). She was in the press room when the award for best drama was being presented. Having seen the list of winners, I knew that series would win the award. She was in the middle of interviews when they announced Apparences as the winner, and LeBlanc couldn’t be on stage with her colleagues to accept it. (“J’suis pas lààààà,” she exclaimed.) If any of you watched the broadcast and were wondering why LeBlanc was missing from the cast and crew on stage, that’s why. She was with us. 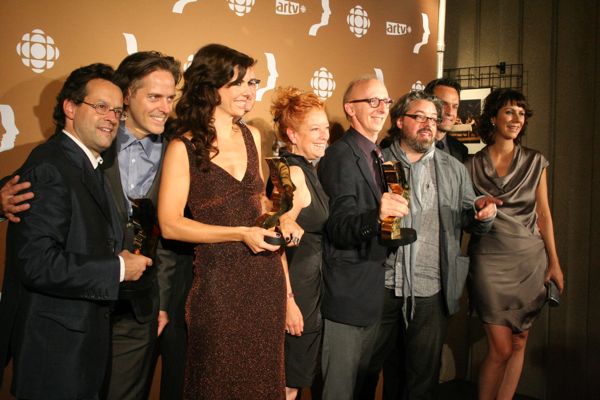 Myriam LeBlanc (front) with cast and producers of Apparences

Fortunately, she rejoined them when they came down to the press room to go through the media gauntlet themselves.

I didn’t ask any questions as I participated in the scrums. My knowledge of Quebec French-language television is average at best. I watch the shows, but I don’t have special insight that would allow me to formulate particularly interesting questions. Also, as a reporter for an anglophone publication, I’m not covering this the same way a La Presse or Metro reporter might. I can’t assume that most of my readers know what Apparences is. In fact, I kind of have to assume the opposite. So rather than get into details or talk about gossip, I have to spend much of my story just explaining things that French-language media could probably just assume their readers already know. In the end, I only used one thing I found interesting that wouldn’t have been learned from just watching the broadcast: Véronique Cloutier comparing husband Louis Morissette to Dominique Michel when he said this coming Bye-Bye would be his last. Even then, I had to give some context, explaining Michel’s history of saying the same thing and then coming back over and over to host the end-of-year special. For the rest, I could have watched the show on TV and not missed anything. (And, indeed, more high-profile TV journalists like Le Soleil’s Richard Therrien and La Presse’s Hugo Dumas never set foot in the press room that night.)

I’d say I have an above-average knowledge of Quebec television for an anglophone. But it’s still deficient compared to colleagues on the francophone side and die-hard fans who watch C’est juste de la TV every week. The big winner of the night, Apparences, is a show I’ve heard a lot about but had never seen an episode of. (Like most serial dramas, they’re hard to get into halfway through.) I also hadn’t seen the big winner overall, Séries+’s Vertige. But at least there I was part of the majority for the little-seen miniseries. The limited space (600 words) and necessity of adding background on the various shows meant I had to choose what to put in the story. You can read it on The Gazette’s website. In the end, as I read it again, it’s a bit dry, and has more of which show won how many awards than it should have. It’s light on quotes (there weren’t many standout moments or zingers in acceptance speeches, with the exception of actress Fanny Mallette complaining that Quebec’s stars are too harshly criticized for their fashion choices at these galas). It doesn’t include the pre-announced homage awards (which would have each necessitated short biographies). And it doesn’t go into much detail about the sketches and musical numbers of the gala itself. But for a short story in an English newspaper talking about awards given to TV series most of its readers don’t watch (and written by a guy who’s still new at this kind of reporting), I think it did its job. After the show ended, I rewrote my story between editions. The first-edition story focused on Vertige, and how this was a milestone in the shift of attention from conventional television (mainly Radio-Canada and TVA) to specialty channels. But while Vertige won more awards, Apparences won more of the bigger ones that are actually presented at the televised gala. So the rewrite led with Apparences’s higher-profile wins, but also mentioning Vertige. By 11:30 or so, I packed up my stuff and headed out the door. I could spot the after-party in a nearby hall, and next to that the live C’est Juste de la TV post-Gémeaux special broadcast. I thought briefly about being a Quebec vedette (or one of those people who hangs around with stars and pretends to be friends with them to feel cool), but decided heading out to a bar with some actual friends was a better idea. Not sure whether going to a beloved dive bar instead of drinking wine with the TV industry makes me more or less of a true journalist.

Oh yeah, and there was this 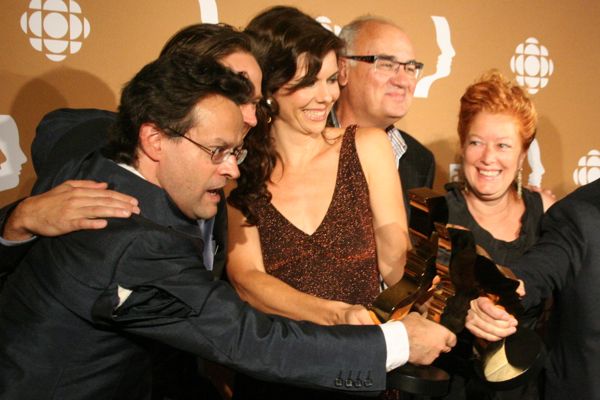 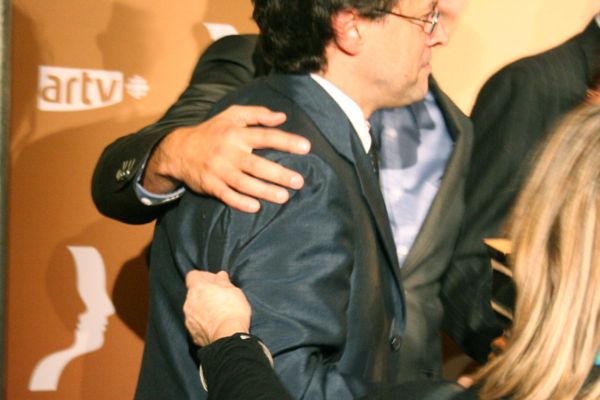 … and the temporary fix.

If you didn’t see the gala, you can watch clips of it on Radio-Canada’s website, starting with the big opening number. There are also interviews with Radio-Canada’s Tanya Lapointe from the press room. UPDATE: A similar post from Valérie Roberts, covering her first Gala de l’ADISQ.

8 thoughts on “The press room at the Gémeaux”