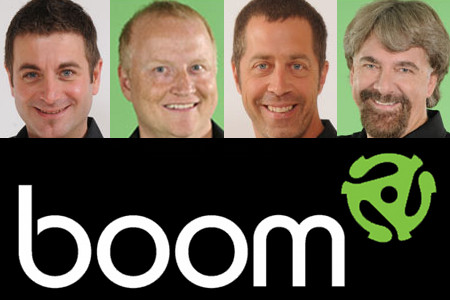 The same week that Astral posted its best quarterly profit ever, the company has let go talent at its Boom FM stations in St. Hyacinthe (CFEI-FM 106.5) and St. Jean sur Richelieu (CFZZ-FM 104.1), causing worries that the stations would no longer be independent.

The Courier de Saint-Hyacinthe broke the news in Thursday’s edition (the story isn’t online yet), saying that announcers, ad salespeople and technical staff had been laid off at a meeting on Tuesday. It named John Perron (mornings) and Daniel Charlebois (afternoons) of CFEI, Patrick Lemieux (afternoons) of CFZZ and Marc Perreault, who appears on both stations, as victims of the cuts.

These details are confirmed by looking through the stations’ websites (though their show pages have been disabled from the site’s navigation menu as they still list the old hosts).

When asked about the layoffs, Astral spokesperson Olivier Racette offered the following, which I’ll let you parse for yourself:

Radio being a fast-evolving and extremely competitive industry, we have to constantly adapt to our listeners’ and clients’ tastes and needs. Given that context, broadcasters need to regularly make changes to their programming, which can sometimes lead to structural reorganizations. Today’s restructuration was implemented as part of our commitment to become always more competitive. It involved position reassignments and, unfortunately, a few job losses.

These changes will help us become even more a central part of the Montérégie community. As boom celebrates its 10th anniversary, we are proud to position ourselves as information leaders in the region with a team of 4 reporters keeping their community informed. Also, boom in Montérégie innovates as it will shortly inaugurate two radio and web-TV recording studios in its St-Hyacinthe and St-Jean-sur-Richelieu, giving the artistic, business and political community a new platform to reach the Montérégie population.

We are also happy to bring to our communities a new morning show with both co-hosts each broadcasting live from St-Hyacinthe and St-Jean-sur-Richelieu, giving the two cities a local programming under the same dynamic brand.

According to the latest licence renewal for both stations, issued in 2007, they don’t have a minimum requirement for local programming per se, but both have a “commitment” to broadcast a minimum amount of local news and information.

For CFEI-FM in St. Hyacinthe:

The Commission notes the licensee’s commitment to devote 3 hours and 19 minutes, including 34 minutes on weekends, to local news. The licensee shall also devote 2 hours and 15 minutes to local weather, sports, culture and entertainment.

For CFZZ-FM in St. Jean:

The Commission notes the licensee’s commitment to devote 3 hours and 19 minutes, including 34 minutes on weekends, to local news. The licensee shall also devote 2 hours and 49 minutes to local weather, sports, culture and entertainment.

The licences of both stations come up for renewal in 2014.