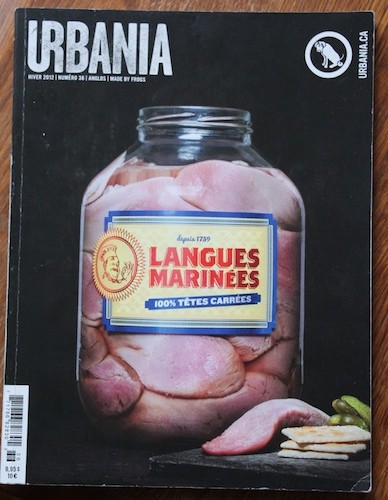 Urbania’s Anglo issue. Apparently that is actually a jar of (pig’s) tongues, but no word on what language they spoke

One of my pet peeves living in Montreal is how so many people who should know better have little to no knowledge of what life is like on the other side of Quebec’s language divide.

To many francophones, Quebec anglos are no different from Torontonians or Albertans, a bunch of Harper supporters who have paintings of the Queen of England on their walls, who despise the French language and have no culture of their own, and who live here only because they can’t find a better job across a provincial or international border.

To many anglophones, Quebec francos are all hard-core separatists, card-carrying members of the Société Saint-Jean-Baptiste, obsessed with language issues and with eliminating the English language from the province so they can impose their new world order which consists mainly of blackmailing the rest of Canada to send more money its way.

The media, sadly, doesn’t help this much. The French media don’t pay much attention to anglophone Quebec culture or local issues in their communities, while the English media pay so much attention to those things they don’t have the resources to explore Quebec’s francophone culture with more than a passing glance.

So it was with some excitement that I heard last month that Urbania, a hip and irreverent magazine that I’d heard about and had followed on Twitter for a while, was coming out with an issue focusing on anglophones. 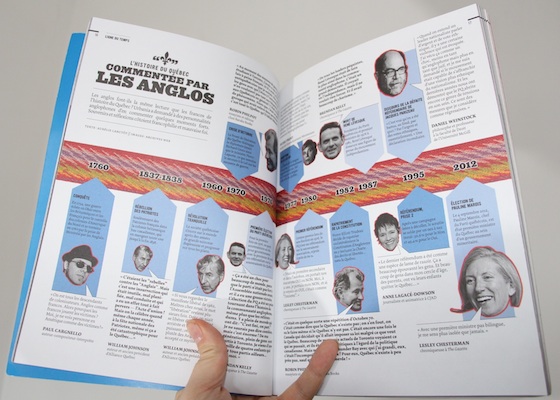 So I went out in the cold and snow and went to the launch party, buying a copy of the magazine for $10. I spent the next couple of weeks reading its 100 pages, a mix of feature stories and charticles like the one above.

Urbania is an impressive magazine. Its design is excellent, and its photography is very good as well. It’s a bit pricey, but worth it if you’re interested in the subject matter.

I admit that through my excitement, there was a bit of apprehension about how the anglo community would be portrayed in this magazine. It wouldn’t be fair to call us all conservative monarchists who hate all francophones, but it wouldn’t be fair to generalize in the other direction either. Stereotypes exist for a reason, and there are anglos in Quebec who take harder lines than others on language, political and other issues. 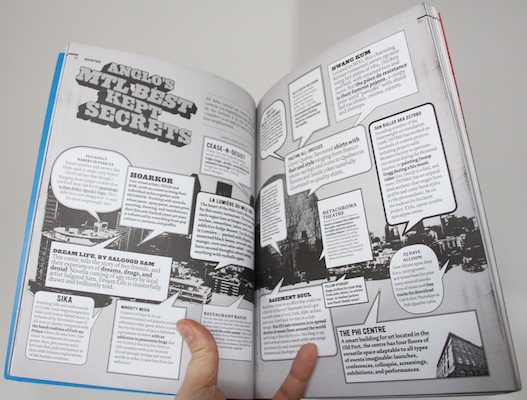 The issue is remarkably diverse in its content, painting a complex picture of anglo Quebec. Some pieces are even written in English. Among its contents (links are to excerpts of the stories posted online):

Plus some articles about things that can’t be easily summarized in one sentence. It also has some more content online, including an Instagram contest of pictures of bilingual Montreal. 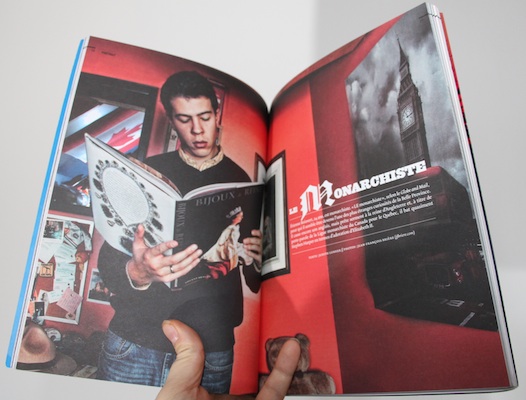 The quality of the stories varies. Some are better or more interesting than others. Some infuriated me for building up the anglo stereotype, while others delighted me by tearing it down.

But most are worth reading. Some are unusual enough (like the francophone monarchist or the anglophone sovereignists) to pique one’s curiosity. Some are interesting because they expose new sides of people you already know. And some (like Biz’s story) are just bizarre.

But I get the impression from reading the magazine that its contributors learned quite a bit in writing it, about how anglo Quebec is more complicated than it seems, and about how deep down, we’re all the same, even those of us whose political opinions seem to make no sense.

Hopefully, that learning gets passed on to Urbania’s readers. And maybe we’ll get a step closer to building a bridge between those two solitudes.

Next up: A special issue on francophones in The Suburban? 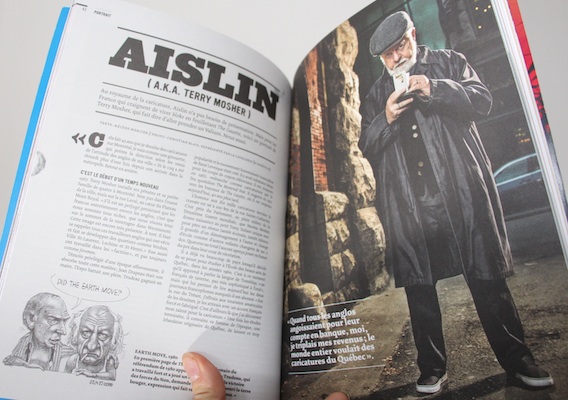 Urbania is on news stands now, assuming those still exist. Issues are $10.

5 thoughts on “Urbania explores the other solitude”