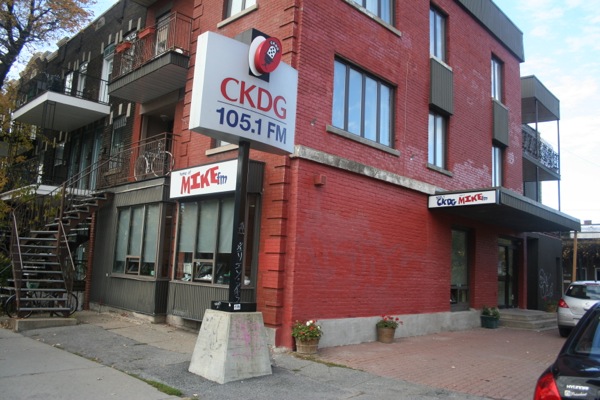 Tired of tuning into 105.1 FM looking for 90s hits and the comedy skits of Tasso Patsikakis only to find out that you’re listening to some Greek music instead?

Well, the Montreal-based commercial ethnic station Mike FM (CKDG), and its sister station CKIN-FM, are looking to change that. Owner Canadian Hellenic Cable Radio Ltd. (Marie Griffiths) has applied to the Canadian Radio-television and Telecommunications Commission to modify their licences as part of their licence renewal this year. The modifications would reduce the minimum amount of ethnic and third-language programming the stations must air each week.

Only the application related to CKDG has been published by the CRTC, but the brief attached to that application makes it clear that identical requests are being made for both stations. CKIN’s licence ends on Aug. 31, 2013, though the CRTC can issue a short-term administrative renewal if it can’t process a renewal application before then.

That could mean instead of the drive home show going from 3-6pm, it could go from 2-7pm, though the station has not said what its schedule would look like if the changes are approved (or even if it will make schedule changes at all).

The licence changes, though they might seem controversial, are consistent with policy the CRTC sets for ethnic radio stations in general. So it wouldn’t be scandalous for the commission to approve the request. But if the commission determines that there was a reason above-normal minimums were set (say, to give a competitive application an advantage – and CKIN got its licence in a competitive proceeding), it might be reluctant to provide relief.

Finally, CKIN is asking to delete conditions of licence that are no longer relevant. Some apply only to the first licence term, and another relates to possible interference with a station that no longer exists.)

Griffiths explains the reason for the amendments in her brief:

The rationale for the amendments generally is to bring the (conditions of licence) in line with the standard requirements for ethnic radio stations as set out in the Regulations and in the Ethnic Broadcasting Policy. A secondary motivation is to harmonize the requirements between the two stations. In so doing, the stations will gain programming and financial flexibility that is critical for their continued success and that is the most practical approach for an independent broadcast group operating unique, ethnic stations in the competitive (greater Montreal area) market for commercial FM radio.

Thus, from the perspective of listeners, the new COLs will have no noticeable effect on the quality or quantity of ethnic and third language, on air programming. Off air, though, these changes will have operational advantages for the Applicant, which in turn will benefit the listeners immediately.

Like most commercial ethnic broadcasters (think Rogers’s OMNI television network or CJNT under Canwest and Channel Zero), advertising revenue from popular English-language programming is used to subsidize third-language and ethnic programs on CKDG. This naturally creates a commercial pressure to cram in as much of that English-language programming as possible, at the most popular time periods. So CKDG’s morning and afternoon drive shows are in English, while most of the rest of the schedule isn’t. CKIN uses the same strategy, except its peak hours programming is in French.

The CRTC’s public notice says CKDG appears to have failed to comply with licence obligations related to the filing of annual returns and contributions to Canadian talent development (common problems for small stations). This is a serious issue because the station’s last renewal in 2010 also noted CTD contribution problems and was a short-term renewal for that reason. The CRTC takes a very harsh view of repeated licence violations, so if an adequate explanation isn’t given, the next renewal could be even shorter (as little as one year), include a mandatory order or other remedies.

The brief acknowledges that the station failed to pay its contribution shortfall by the Aug. 31, 2011 deadline. It blames this on the recession, but says most of the money has now been paid and it has come to agreements with MusicAction and FACTOR to pay off the rest by Aug. 17 and May 3, respectively. The brief makes no mention of the problem with the annual return for 2009-10.

The CRTC is accepting comments about the licence renewal of CKDG-FM, and its proposed licence amendments, until June 11. No hearing date is scheduled. You can provide comments to the CRTC here. The application is 2013-0229-9 (Canadian Hellenic Cable Radio Ltd.). Note that all information provided, including contact information, is on the public record.