Updated with some clarification below about TSN’s main feed.

It was inevitable. With so much sports programming available, with so many scheduling conflicts, with prices going up (both in terms of subscription fees and in terms of rights fees) and with Rogers having scooped up national NHL games, TSN had to expand beyond the two channels it previously had.

TSN, meanwhile, had TSN and TSN2, plus special part-time regional feeds for Jets and Canadiens games.

So on Monday, TSN officially expanded to five channels, numbered 1 through 5. The Jets and Canadiens channels disappear, and regional NHL games (Jets, Leafs and Senators) will instead air on the three new channels, which will be blacked out outside their regions when those teams are playing.

Bell Media managed to secure deals with most major providers to add the channels. Shaw, Rogers, Telus, Bell, Cogeco, Eastlink, MTS and SaskTel are all on board. The major holdout is Videotron, which says it’s still in talks with Bell Media over adding the channels.

These kind of negotiations are complex, and it’s hard, without getting details on those talks, to tell which side is being unreasonable. Videotron is out on its own here, but it’s also the only provider that allows its subscribers to choose just about everything à la carte. Right now TSN is one of those channels, and it comes with TSN2 thrown in for free.

Various factors come into play when negotiating over new channels: the price, packaging and other special conditions, available space on the distribution network, and of course subscriber demand.

TSN decided to launch the five feeds on the first day of the U.S. Open tennis tournament. Early rounds of a tennis major provide a very good example of how useful extra feeds can be, with lots of matches happening simultaneously. Viewers might be interested in following a Canadian, or checking up on their favourite tennis superstar, or checking out some interesting story going on in another match entirely. Having five feeds is very useful here.

As they decide whether to add these channels, Videotron and others have to ask themselves: Just what do the other three TSN channels offer that its two existing ones don’t have? 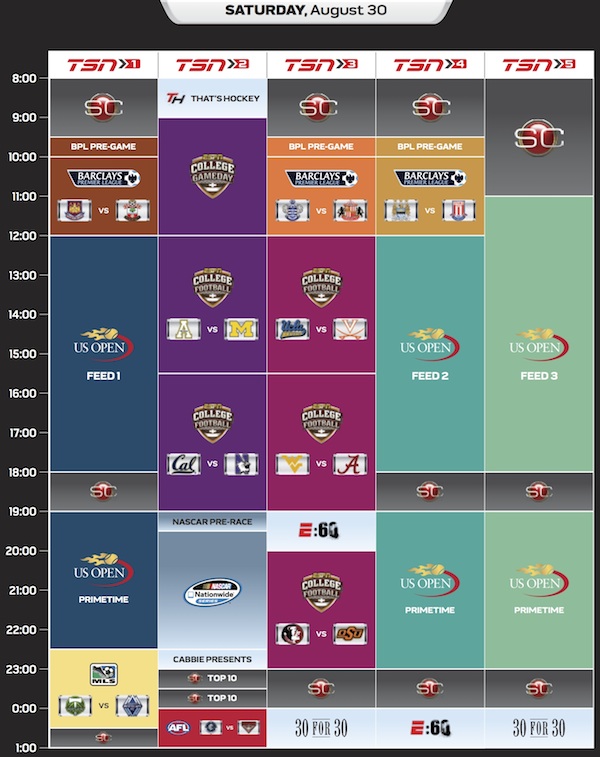 Schedule grid of TSN’s five channels for this Saturday.

This schedule for Saturday offers more insight into the added value of these additional feeds. Instead of one Premier League game on Saturday mornings, TSN can air three simultaneously. It can air college football games and more NASCAR races, things that would otherwise be shown on tape-delay or on those rare occasions when there was nothing better to show.

Fans of the Jets, Leafs and Senators (who live in their respective broadcast regions) will definitely appreciate the feeds during the NHL season. But that’s only 138 games, or 414 hours of programming, in a year. And as I mention above, subscribers in those regions don’t need the extra channels to watch their team (except in some areas of Ontario where the broadcast regions overlap).

Identical programming much of the time

If you look at other days, the value of extra TSN channels becomes less apparent. Take Friday, Sept. 5. The U.S. Open is still on, but its field has narrowed so much that only three matches are scheduled for that day: two women’s singles semifinals and the mixed doubles final. There’s also a NASCAR race and a CFL game that night. Two channels are more than enough for all that.

Of course, these channels just launched, and we could see more differentiation in the future, especially as the number of subscribers who have only one or two TSN channels further diminishes. There was a suggestion early on of installing cameras in other TSN Radio studios and broadcasting other radio shows on TV. Repeats, documentaries and talk shows can also fill up the schedules pretty easily.

But because of TSN’s Sportsnet-like regionalization of those channels, it has essentially backed itself into duplicating much of its content across four of them (TSN2 isn’t the main feed anywhere, so its programming can be entirely distinct). So expect CFL games and major sporting events to still be the same across TSN1, TSN3, TSN4 and TSN5 for a while.

That’s not to say that the additional feeds aren’t worth it. But for now, their value depends on how much you want more choice in things like tennis, NASCAR, English soccer and U.S. college football, and whether you feel like, when it comes to sports, you absolutely cannot miss a thing.

UPDATE: Mitch Melnick speaks with TSN president Stewart Johnston about the new channels. Johnston says Videotron sees the value in them and the two parties are working on getting them added.

63 thoughts on “Are TSN’s five channels worth it?”