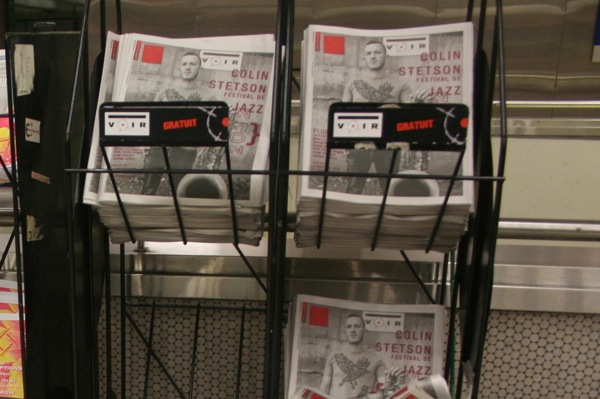 Pierre Paquet, who founded the alternative weekly Voir in 1986, has sold it to a group composed of two of its managers, Michel Fortin (executive vice-president and general manager) and Hugues Mailhot (vice-president digital solutions), and investment company XPND Capital, owned by Alexandre Taillefer, better known as one of the dragons on Radio-Canada’s Dans l’oeil du dragon.

The purchase price wasn’t disclosed. It includes Voir editions in Montreal and Quebec (now biweekly and the only alternative weeklies left in those cities), plus Voir.ca, Boutique Voir, Guide Restos Voir and other related brands, plus distributor Diffumag and interior advertising network Panoramik.

Without knowing the price, it’s hard to say if this is good news or bad. But the continued involvement of current management will no doubt reassure its 50 or so employees. And Taillefer isn’t the kind of guy to invest in a doomed company.

Communications Voir had previously owned editions in Saguenay and Mauricie, as well as the English Montreal alt-weekly Hour. Those were all shut down in 2012. Sherbrooke and Gatineau editions followed in 2013.

UPDATE: Taillefer in interview with Radio-Canada. Suggests the purchase price was in the low seven-figures. And in an interview with La Presse, he says the big reason for buying the company was the Boutique Voir concept.

And also in La Presse, Nathalie Petrowski on Voir’s declining influence and Taillefer’s vague plans for rebuilding it.

One thought on “Alexandre Taillefer, two managers buy Voir from its founder”