Updated with details of the new project below. 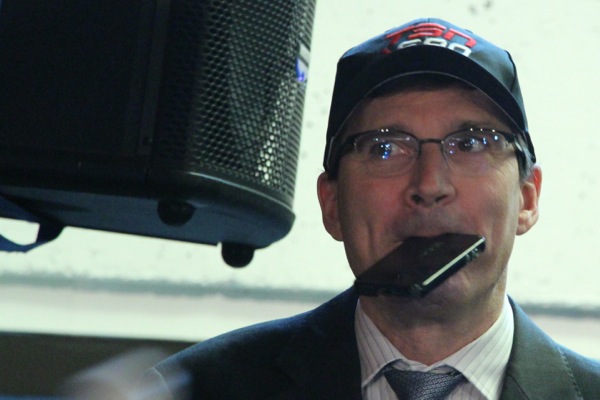 Would you pay $4 a month to hear Brian Wilde talk about the Canadiens?

That’s the question Wilde put to his Twitter followers today, proposing to become an independent hockey reporter supported directly by his audience through subscriptions. He’ll go ahead if he has enough interest, with a launch in August/September.

With almost 1,000 votes to the Twitter poll in two hours, the results are split, with 56% saying yes. But that doesn’t mean 560 people are guaranteed to sign up and remain subscribed.

So in short, this is what Wilde is proposing:

Wilde has done his homework in setting a price point here. The monthly price is in that cup-of-coffee range that will be high enough to be useful but not so high that people can’t afford it. The yearly price offers a significant discount (37.5%) in exchange for commitment.

But that “for the price of a cup of coffee” comparison has been used so much that people have long run out of cups of coffee to sacrifice in favour of a subscription to something. Yeah, $4 a month is cheaper than a newspaper or TV subscription, but if that newspaper subscription gave you access to 20 of your favourite columnists that each want $4 a month from you now as independents, it becomes more expensive for you.

So for Wilde to be successful, he needs to offer something that is worth you cancelling a subscription to something like The Athletic and going to him instead.

And he doesn’t just need you, he needs a lot of yous. A back-of-the-envelope calculation shows that to support him and a partner with a middle-class salary, plus taxes and reasonable expenses (we’re assuming no travel here), this service would need 5-10,000 yearly subscribers.

More likely, he could combine a smaller number of paid subscribers with other sources of revenue, such as ads, sponsorships and freelance revenue. Either way, there’s a lot of work ahead.

For comparison’s sake, Canadaland gets about $20,000 a month from its Patreon subscribers, and it has a staff of about half a dozen plus regular freelancers. It gets by with Patreon funding and money from sponsors.

The key to making this a successful business venture will be offering something rare enough and in enough demand to make a lot of people want to pay for it.

There’s definitely demand for Canadiens coverage. It’s by far the top sports team in the city, and every game has sold out for years.

But there’s also a huge supply of news from other sources. There’s the TV networks like RDS, TSN, TVA Sports and Sportsnet, there’s TSN Radio, 98.5 and 91.9 Sports, there’s La Presse, the Journal de Montréal and the Montreal Gazette’s Hockey Inside/Out, there’s CBC/Radio-Canada, there’s NHL.com and the Canadiens’ official organs, there’s independent websites like Eyes on the Prize, and even gossip sites like Dans les coulisses and 25 Stanley.

And the vast majority of these sources are free.

For Wilde’s project to be successful, he needs to offer something that’s better than all that. Podcasts that are better than what you’ll hear on TSN 690. Stories that are more interesting or insightful than the various newspaper columnists. Scoops that beat out an army of reporters who know they could build a career on such things (and covering an organization known for its secrecy). Access that beats what’s granted to broadcast rights holders that pay millions. Call-ins that are more entertaining than Ron Fournier.

That’s not easy, to put it mildly.

But not impossible, either. Wilde has grown an audience by having opinions that are unmoved by popular opinion. He’s guided by the facts more than his emotions. And while he cares about his audience (respecting them is one reason he’s been so successful), he won’t take the easy bait and jump on bandwagons. With opinions about the Canadiens a dime a dozen (and even then you’re overcharged), Wilde needs to be well above the pack to get people to offer financial support.

Reporting on the Laval Rocket and scouting in general puts Wilde in a spot that’s a bit less crowded with competing media. If he can be a top source for information about the minor leagues, he could become very popular among a niche audience. But are thousands of people ready to pay for analysis and news about Montreal’s AHL farm team?

Wilde’s new project will give him lots of freedom to do what his audience wants instead of what Bell Media bosses want him to do. But he’ll also be working harder for less money.

The project could turn into a flop, with only a few friends and hard-core supporters chipping in money, far below the critical mass necessary to make it something of real value. Or it could grow, gain more contributors and become an independent site that people value, like The Athletic or Canadaland.

Wilde’s Twitter poll is a first step toward gauging interest, but the real test will be how much money comes in when it launches, and especially how many people remain subscribed after a year or two, when their outrage over CTV laying him off has long faded away.

UPDATE: The project is part of a website called Recrutes, focused on hockey prospects. Habs 365 is a subscription option. Wilde has some content free on the site, including his first video: