It’s called the Wheaton Rule, or Wheaton’s Law (after the Star Trek The Next Generation actor and gamer), but it’s just common sense: Don’t be a dick. Don’t intentionally be mean to other people. Don’t bring other people down to make yourself feel better. Don’t make other people the butt of your jokes if they don’t like it. Don’t talk crap about people behind their backs to make yourself seem cool.

This year, as a lot of powerful people (i.e. men) learn the hard way the karmic consequences of being a dick, I feel we could use a reminder of the dickish things we do, even when we don’t realize it. Because it’s not just exposing our genitals to subordinates at work, or obscenely taunting an opponent during an online game, or whatever it is your neighbour Jean did 10 years ago that made her an enemy for life. Being a dick is something we all do a little bit on a regular basis, sometimes out of emotional insecurity, or jealousy, or frustration, or insensitivity, or laziness, and often without even knowing it.

The Internet makes the problem worse, and not just because of online anonymity. Public forums like Twitter encourage us to put on a show, to measure our worth based on how many people click that “like” button. And unfortunately one of the simplest ways to rack up those likes can be declaring an enemy and rallying people to the moral high ground, no matter how high that ground actually is.

It’s one thing when a serial abuser like Harvey Weinstein won’t stop until he’s publicly humiliated. It’s another when someone on Twitter says something well-meaning but insufficiently woke and you decide to make a public spectacle of how they should feel bad about it.

It’s one thing when you don’t like a movie or television show or piece of music or visual art. It’s another when you decide to lob public insults at artists, piling on to a bandwagon that mocks people for their perceived failures.

It’s one thing when the leader of a country is an insecure, inexperienced man whose immature outbursts can cause real damage to many people. It’s another when we teach our children that mocking people for their hair, their skin, their weight and their poor vocabulary is okay as long as you disagree with them about politics.

It’s one thing when a white supremacist shows up at a rally and says something anti-Semitic. It’s another when you dismiss an entire human being as disposable because she happened to naively vote for someone whose party she supports, and who promised her a better life with well-paying jobs.

It’s one thing when you’re gently teasing a friend to help him get over a silly insecurity. It’s another when you keep going long after he’s shown himself to be clearly uncomfortable with how you’re treating him.

It’s one thing when you’re having an animated discussion with someone in the hopes of teaching each other something. It’s another when you’re involved in such a discussion with no desire to learn, when your only motivation is to shoot down every point the other person is making and get in as many opportunities as possible to call that person stupid.

It’s one thing to calmly assert your rights when you’re speaking with a customer service agent, or to ask for a second opinion when speaking with a physician, or to ask for a decision to be reconsidered. It’s another to scream at someone because you don’t like how they’re applying a company policy, or failing to solve your problem, or upholding the law.

It’s one thing when you’re dealing with one of the few people in the world who is truly, irredeemably evil. It’s another when you have the choice to make an enemy or a friend, and you pick the former because it’s easier and makes you feel better faster.

There’s a lot of awful in this world without good people intentionally adding to it.

Nobody’s perfect. I’m certainly not. I could be better, nicer, kinder, more forgiving, more supportive. I’m not sure if there even is such an attainable ideal of good for us mere humans, or if attaining it would even be good for our personal health. There is such a thing as being too generous.

But let’s start small. Let’s support each other when we’re on the same team, even if we may not see eye to eye on everything. Let’s be open to learning from each other rather than just calling each other out. Let’s recognize that, for most people, a private friendly conversation based on curiosity and understanding can do so much more to change people’s behaviour than a holier-than-thou public shaming filled with hyperbole.

And let’s be more proactive. Go out of our way to make people feel included, make them feel important, make them feel cool. Take a moment out of our day (this one would be a great one) to send a friend a note or give them a call to tell them how much we appreciate them. Use “we” more often than “you.”

If given the choice between making people happy and making them miserable, all things being equal, choose the former.

Merry Christmas everyone. Wishing you a new year with fewer dicks and more … opposite-of-dicks.

Their info was iffy and scant,
So TVA chose to recant,
Belatedly sorry
For pushing the story
And feeding La Meute and Levant.

It took almost three days, but TVA Nouvelles has finally apologized and retracted a story it published Tuesday about a Côte-des-Neiges mosque demanding a city construction crew not have women working on Fridays — and getting that request enshrined “noir sur blanc” in their contract, and several women being reassigned as a result.

The Parti Québécois and influencers like Marie-France Bazzo and Bernard Drainville were quick to denounce the mosque, and right-wing anti-immigrant group La Meute announced a protest at the mosque (it has since cancelled).

The story started smelling fishy almost immediately. The Journal de Montréal posted the TVA story to its website on Tuesday and assigned a reporter to cover it, but pulled the story quickly after discovering facts that contradicted TVA’s report. (The paper has yet to publish a single story about the whole affair.) The mosque issued a statement denying everything and expressing anger that TVA didn’t try to contact them for comment. La Presse summarizes the denials here.

The Quebec Press Council has received at least two complaints about the story.

On Thursday evening, TVA Nouvelles issued a “mise au point” in which it said the facts have “evolved” (you know, from true to false). It was instantly criticized for not including an apology. On Friday morning, another mise-au-point which included an apology and promises of an internal investigation.

Still, many groups still believe the story is true, and many stories published by other media, like The Rebel (which used the term “no-go zone”, suggesting irresponsibly that the area is dangerous), haven’t been corrected. In some cases, wild and nonsensical conspiracy theories have been concocted to save face.

Among the things the investigation should look at:

I’m also not too optimistic that the results of this investigation will be made public.

Other news about news

END_OF_DOCUMENT_TOKEN_TO_BE_REPLACED

After I ignited a Twitter firestorm with my comments about @CassieCampbell and @hockeynight, here are some sober second thoughts. I appreciate everyone who kept me accountable: pic.twitter.com/FIk025wz6O

END_OF_DOCUMENT_TOKEN_TO_BE_REPLACED 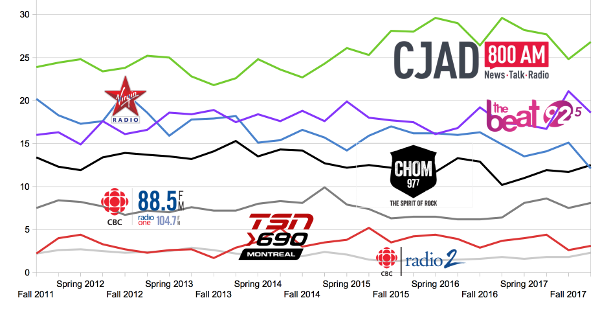 Market share among anglophone Montrealers, based on Numeris data

Numeris published its latest quarterly report for metered markets today, and the data for Montreal is about the same as it always is, with one exception: Virgin Radio 96 has its lowest overall share ever, and for the first time has dipped below CHOM to fourth place among anglophones — 12.1% to CHOM’s 12.5%. Both stations are owned by Bell Media, so it’s not a huge deal in terms of competition, but the trend line for Virgin is clearly heading down, from a high of 20% in 2012.

I have no magical explanation for this trend, and I’m sure everyone has their theories, from its use of syndicated programming like Ryan Seacrest to its loss of popular announcers to The Beat, but the most likely explanation is that The Beat has a better idea of what music anglos want to listen to.

The Beat’s press release, announcing itself as the number one radio station (among adults 25-54) is here. Virgin decided to just go with its weekly reach number without trying to rank itself. 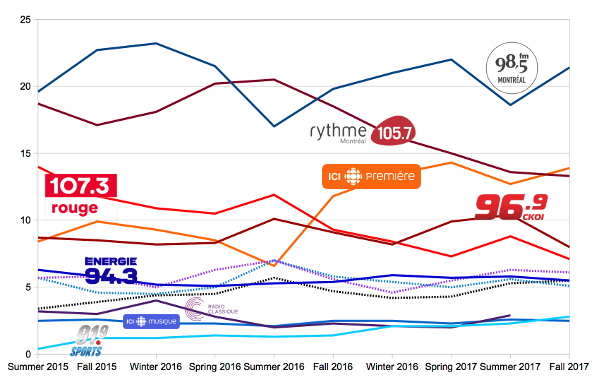 Market share among Montreal francophones, based on Numeris data.

On the French side, CHMP-FM 98.5 remains the top-rated station by far among all ages 12+, but Radio-Canada’s ICI Première has climbed into second place, edging out Rythme FM. The trend line for Radio-Canada is impressive, taking a big jump in the fall of 2016 and continuing to improve. (Alain Gravel took over as morning show host on the station in the fall of 2015.)

Both adult contemporary stations Rythme FM (Cogeco) and Rouge (Bell) have declined significantly over the past two years, with Rouge falling from third place to fifth. Its major shakeup this fall, bringing in most of the on-air staff from sister station Énergie, hasn’t done much to help yet. (And since the top of that list was Éric Salvail, it’s not getting better soon.) CKOI and Énergie are about the same as they were two years ago in terms of share, with Énergie getting about the same number of francophone listeners as the three English-language music stations (dotted lines in the chart above).

Bell Media tried to polish the ratings turd as well as it could, crowing about how Énergie is the most improved francophone music station in Montreal, and how Rouge FM is … also the most improved? … actually how Rouge has seen the biggest gain in overall reach in the past six months, and how the drive-home show is best among women 25-54 despite “un mois d’octobre tumultueux.”

At the bottom of the chart (I’m excluding stations below 1%), RNC Media’s 91.9 Sports continues to slowly improve its numbers. This is the first time since it was a jazz station that it has kept the same format and brand for more than two years. And it looks like the city’s only French-language full-time sports station has finally found something that works.

The chart line for CJPX-FM Radio Classique stops this summer. The station was not included in the Numeris report, meaning that it has stopped subscribing to the service.