Updated April 20 with a clarification from Rogers, and Nov. 4 with clarifications based on feedback from Ethnic Channels Group.

The Canadian Radio-television and Telecommunications Commission has released eight applications for national ethnic television services, and set a hearing for  Nov. 26 to discuss which of them would be the best candidate to replace OMNI.

Last year, the commission caved to OMNI’s demand that it be given mandatory subscription fees from all television subscribers, under the threat of surrendering the licence and leaving the country without a multilingual TV service offering newscasts. But in giving in, the CRTC also set a limit of three years (until Aug. 31, 2020) and said that it would ask other broadcasters if they had better proposals for such a mandatory ethnic service, and consider them at a future hearing.

On Tuesday, the CRTC released eight applications, seven for TV services (including OMNI’s proposal for renewing its status) and one for an ethnic described video guide. Each makes proposals for multilingual programming including national newscasts and proposes a mandatory monthly fee.

I analyzed the nearly 200 documents submitted for the eight applications and below present an analysis of the applicants, proposals and programming:

The proposal: Keep OMNI alive. The structure of the existing service wouldn’t change (four regional feeds based on its existing stations in Vancouver, Calgary/Edmonton and Toronto, plus a feed based on ICI in Montreal for Quebec), and it would keep its over-the-air transmitters running, but an increase in the number of newscasts, local independent production and a doubling of scripted drama and documentary funding in exchange for an increase in the wholesale rate from $0.12 per month to $0.19 and eventually $0.21.

UPDATE: Rogers contacted me after this post was published to say “we are still committed to regional Italian news newscasts, which will continue to be produced from Montreal and Toronto.”

“In Canada, we have found the Italian community for OMNI is largely based in Ontario and Quebec, so having a national Italian newscast wasn’t best serving the needs of our multilingual audiences nationally,” explains Director of Communications Michelle Lomack. So instead of a national Italian newscast, they’ll have regional ones. (This is not mentioned in the application nor on the proposed programming schedules.)

The applicant: Rogers has been in this business since 1986, when it bought Toronto’s CFMT-TV out of bankruptcy. But its proposal for mandatory distribution for OMNI didn’t impress the CRTC very much, which is why it was given only three years and other applicants were invited to propose competing ideas. 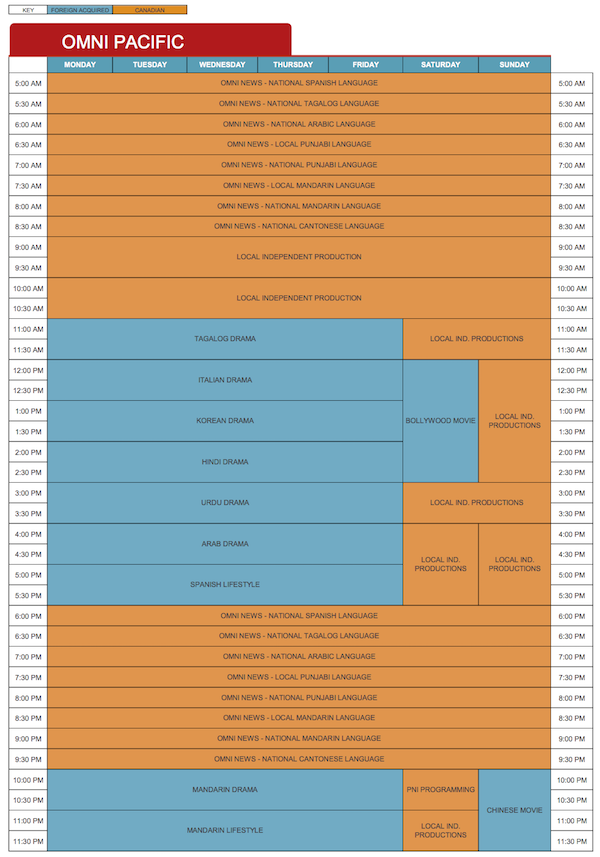 Bottom line: It’s the devil we know. But Rogers’s application spends a lot of time comparing itself to third-language specialty services, failing to anticipate the proposals it will actually be measured against. Rogers is throwing some extra money around (and charging us more for it), but the commission will likely feel underwhelmed by the improvements.

The proposal: Two feeds (OTV 1 and OTV 2), with newscasts in six languages in primetime (three on each channel) six days a week. English and French current affairs shows. Other programming sourced from Canadian and foreign sources.

The applicant: Bell Media needs no introduction. It’s Canada’s largest broadcasting company, but it has relatively little experience in ethnic and third-language broadcasting. 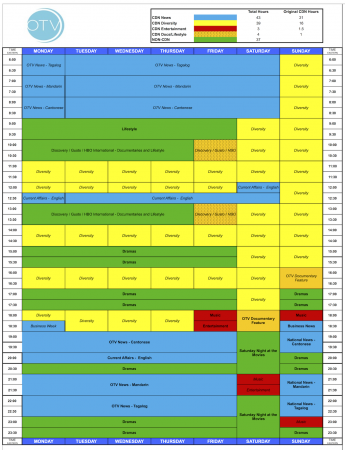 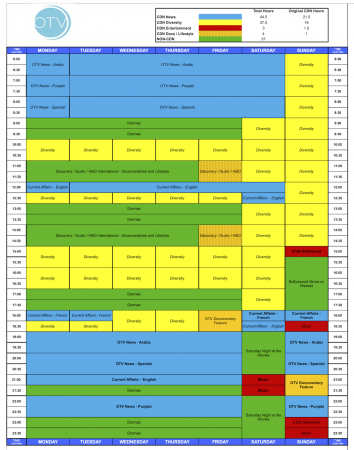 Bottom line: Bell’s application seems like less of a genuine desire to enter the ethnic television game and more of a counter-offer to Rogers in order to get some free money it can use to indirectly support the rest of its empire, even if Our TV isn’t profitable on its own. We might see some genuinely great things come out of this, like a Punjabi Grey Cup broadcast, but most of it will likely feel like translated content from its other properties, if it’s not literally that.

The applicants: The licence will be controlled by Asian Television Network International Ltd. (33.3%), Corus Entertainment (which has a 50.5% stake in Telelatino) at 28.3%, the minority shareholders of Telelatino (Rita Rosati, Joseph Vitale and Romeo Di Battista) at 28.3% and Telelatino president Aldo Di Felice at 10%. ATN is one of the main third-language broadcasters in Canada, with more than 50 channels providing South Asian programming, including the country’s first South Asian TV channel, licensed in 1997. Telelatino owns Telelatino, TeleNiños, Univision Canada, EuroWorld Sport, Mediaset Italia and other Spanish and Italian language services. 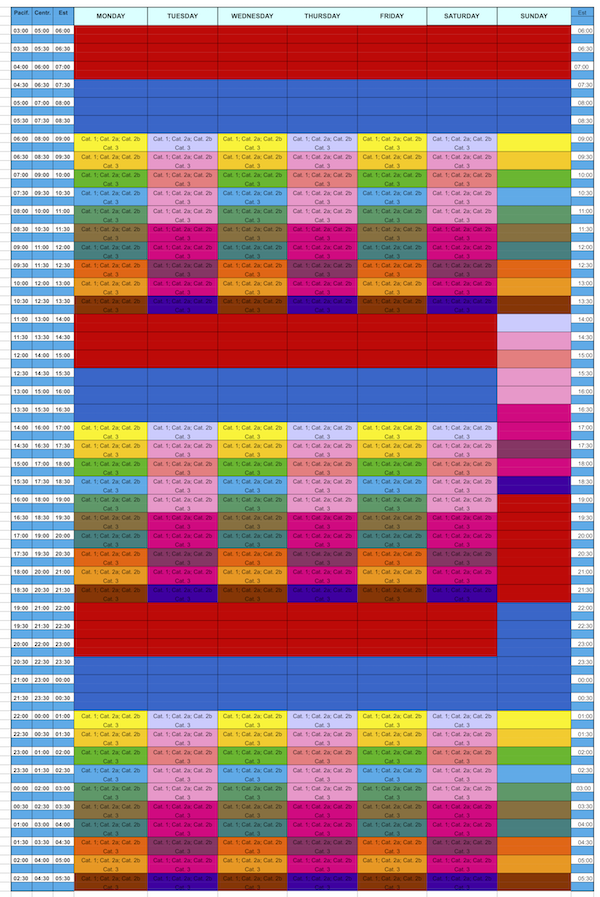 Bottom line: If they can convince the CRTC that they’re serious about providing programming in all languages (like bringing established Chinese, Arabic, German and other broadcasters to the hearing), they have a decent shot.

UPDATE (April 23): Corus has issued a press release about the application.

The proposal: A national service with three regional feeds (the application hints at a possible fourth in partnership with ICI, but the group tells me it has no such partnership). Each video feed will have audio feeds in several languages (10 to start with, and up to 25 by the end of the first licence term).

The applicant: Ethnic Channels Group is a large ethnic broadcaster internationally, with more than 80 television services in 20 languages, 60 of which are Canadian. It owns Zee TV Canada, a Hindi-language channel, and BeIn Sports Canada, an English-language sports channel. Most of the services it owns or distributes don’t have broadcasting licences in Canada, and are either exempt or foreign. 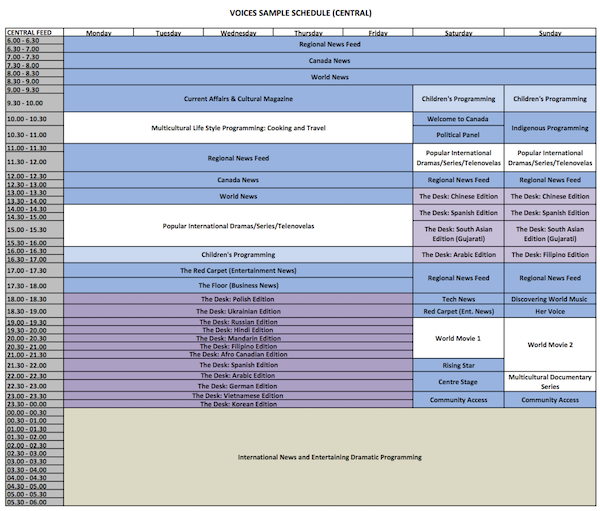 Bottom line: It’s hard to judge this one. The ATN/TLN proposal has more meat behind it, but it’s not split regionally like this one is. It depends how much the CRTC values local programming over viability.

The proposal: A national one-feed channel that maintains OMNI’s four language newscasts, adds programs in other languages weekday afternoons, and includes a variety of other programming including some about specific regions of Canada.

The applicant: Corriere Canadese is Canada’s only Italian-language daily newspaper. The group is backed by it and other members of the Italian community. 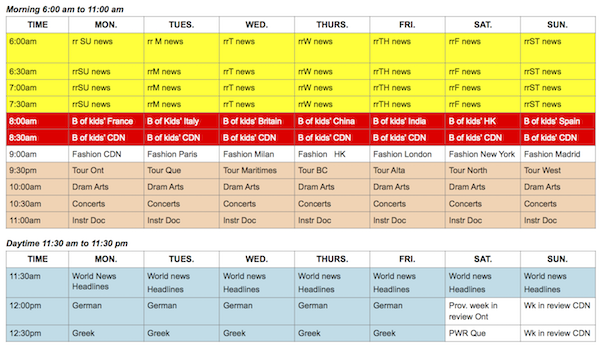 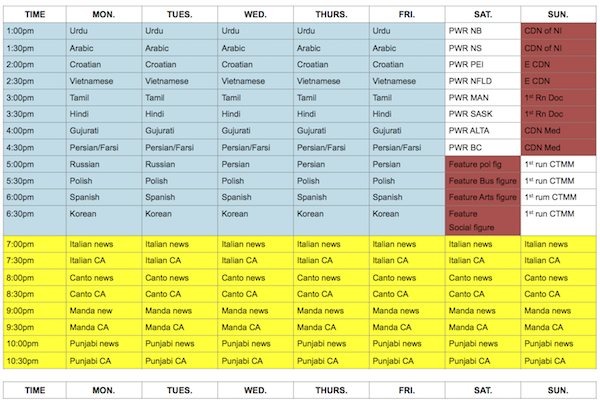 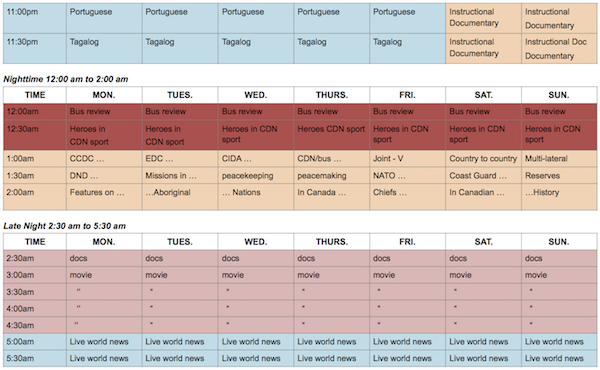 Bottom line: This group needs to reassure the CRTC that it speaks a language other than Italian. The advisory board is a good start, and building a freelance network will help. But without TV experience, it’ll be a tough battle against more established broadcasters.

The proposal: A national service with East and West feeds, with newscasts in the evening and independent programming during the day.

The applicant: Amber Broadcasting is affiliated with Akash Broadcasting, which owns CJCN-FM Surrey, B.C., an Indian radio station that the CRTC only licensed in 2016. Both are owned by Herkiranjeet Kaur Mann. 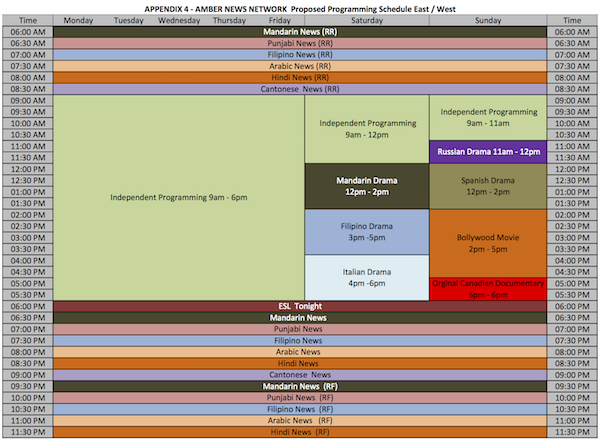 Bottom line: A table filled with former OMNI execs with a plan for a better OMNI than OMNI will probably impress the commissioners. If they can get representatives from some other ethnic communities to commit to helping them they have a very good chance.

The proposal: ICTV is actually proposing two related services: TELE1, which will fulfill all the CRTC’s requirements, and TELE2, which will be free of charge and offer sports and entertainment programming. The TELE1 channel will start off as a national channel, but by year 5 expects to split up into five regional feeds: “BC, the Prairies, Ontario, Quebec, and the Northern and Eastern provinces and territories.”

The applicant: ICTV, whose members have connections to McGill’s CKUT and Concordia’s CUTV (but is not formally linked with either institution), is a very left-wing activist group whose leader, Laith Marouf, made headlines as a Palestinian rights activist at Concordia University in the early 2000s (about the same time I covered student politics for Concordia’s student newspaper The Link). ICTV was formed to take on Videotron’s MAtv community channel, and successfully got the CRTC to declare MAtv in non-compliance with its mandate. But ICTV’s request to replace MAtv with its own channel was denied. It does not own any other television services. 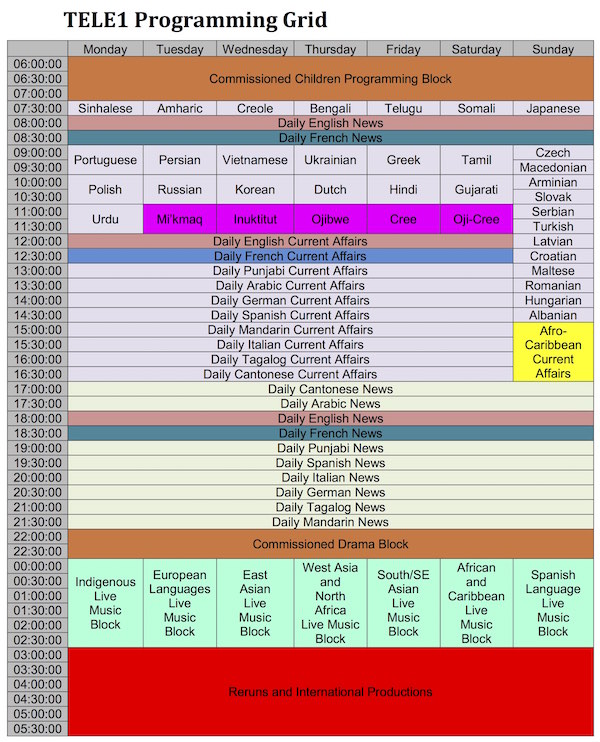 Bottom line: It’s an unrealistic project that would almost certainly collapse under the weight of its own ambitions before it ever got off the ground. The chances of it being approved are poor. If by some miracle it does get picked, expect it to launch much later than planned, and with a much reduced scope and/or with poor-quality programming.

The proposal: A series of 20 audio-only channels in 23 languages (including English, French and Indigenous languages) listing television series on other channels that have described video available.

The applicant: Evan Kosiner of Kosiner Venture Capital Inc. is behind this application. Kosiner is a serial entrepreneur who has had many applications before the CRTC, including one in 2013 to have a described video guide similar to this one be made a mandatory channel. The CRTC declined to do so.

Bottom line: If the 2013 application failed, it’s hard to see how this one would succeed. Kosiner doesn’t have the best record getting competitive applications approved at the CRTC. But the commission has had turnover in five years, and there’s an outside chance that this application could be approved along with another one for an actual TV service.

The CRTC is accepting comments on the above applications until 8pm ET (5pm PT) on June 7. You can file comments here. Note that all information submitted, including contact information, becomes part of the public record.