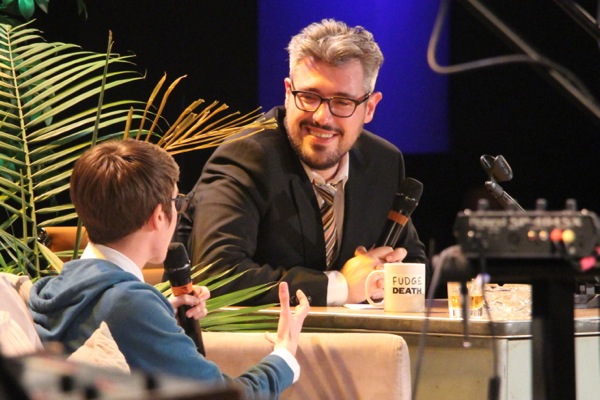 Remember Dimitrios Koussioulas? He was a flash in the pan around 2013. He had a web series called Parc Avenue Tonight, in which he interviewed locals late-night-talk-show style in his apartment, and CBC Montreal created a one-hour TV special out of that. That same summer, City TV aired a local lifestyle series called Only in Montreal in which he was one of three hosts.

And then, nothing. A second season of his show was filmed in 2014, but never got released. Only in Montreal was never renewed (though its timeless episodes spent a long time in reruns). And Koussioulas seemed to move on with his life.

And then, last Friday, this:

After four years sitting on the shelf (or more accurately, in digital storage), Season 2 of Parc Avenue Tonight is almost complete and about to be released.

About a dozen episodes will be posted to YouTube in the next week or two (he’s not firm on the number yet), all at once so people can binge it Netflix-style. “No one has the attention span to check back every week,” he told me on the phone from Toronto, where he lives now.

Yeah, Koussioulas has followed the cliché of the Montreal ex-pat who moved to Hogtown for economic reasons. He met a girl, you see, and they decided to get married, and “at the same time we had to move to Toronto because she got this really great job. We moved here and then we eloped and went to Paris and came back and I went into advertising.”

He may have had a new day job (similar to the old day job he had in Montreal before going in front of the camera), but the unpublished video of these interviews nagged at him. “A lot of people worked on it. I don’t want all their hard work to go away because I’m living in Toronto,” he said. The four-camera production had a crew of eight.

Guests on the new season, seen in the teaser video, include radio morning man Terry DiMonte, TV reporter Aphrodite Salas, former Heritage Minister Sheila Copps, musicial Li’l Andy, Giller-winning author Sean Michaels (not to be confused with the wrestler), producer (and former Only in Montreal co-host) Tamy Emma Pepin, designer Mitz Takahashi (not to be confused with the TV anchor), puppet Nonna Maria, and others. And there’s sidekick/bandleader Tony Ezzy, who was also part of the CBC broadcast. Each episode should be about  15 minutes long, same as the first season (Koussioulas said editing the interviews down was a real challenge).

Four years can mean a lot in the lives of talk show guests. But Koussioulas said most of what they talked about still applies. “Some stuff has really changed, some of it has not,” he said, crediting the lack of change to something inherent in Montreal.

Koussioulas’s new home diminishes the likelihood of a third season, though he said he may do something in a similar vein that won’t be focused on our city and its famous thoroughfare.

So maybe it’s time for someone with a bit of money and a lot of love for this city to pick up the torch. Doing this kind of production isn’t easy, and it isn’t lucrative, but it is possible.

Correction: This post originally said new episodes would be about an hour long. Seems I misunderstood Koussioulas there. They will in fact be more like 15 minutes.

Update (Aug. 10): Nine episodes from Season 2 have been posted. You can watch them here:

Or as individual episodes: