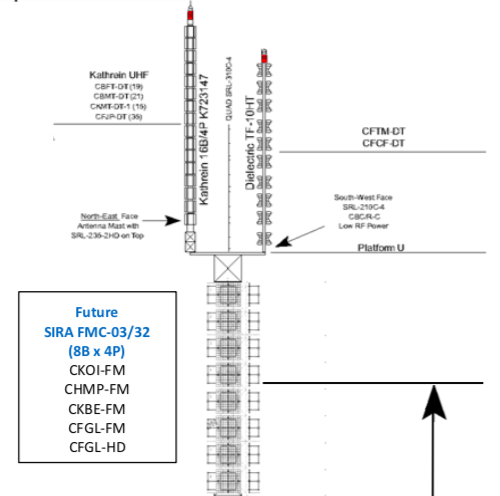 Now, instead of transmitting from four different antennas (three at Mount Royal, plus CKOI), all four stations — CHMP-FM 98.5, CFGL-FM 105.7 (Rythme FM), CKOI-FM 96.9 and CKBE-FM 92.5 (The Beat) — are on a new eight-bay antenna from Italian manufacturer SIRA that wraps around the tower just below the upper platform.

The new installation also allowed Cogeco to implement an increase in power for The Beat, which was authorized in 2013 to increase to 100,000 watts from 41.4kW.

The other three Cogeco stations were previously on three separate antennas on the upper platform, about 20 metres higher. The lower height will have a slight impact on their signals, but not significant enough to be noticed. CHMP-FM has increased its power from 41kW to 48kW to compensate, and CKOI-FM, which had planned to go to 147kW, will instead go to 148kW. On the CIBC tower it was broadcasting at 307kW.

The new antenna setup gives Cogeco more control, and will open the door to HD Radio broadcasts. So far, only CFGL-FM 105.7 has HD running, and its sole HD signal simply rebroadcasts the analog signal of the same station. 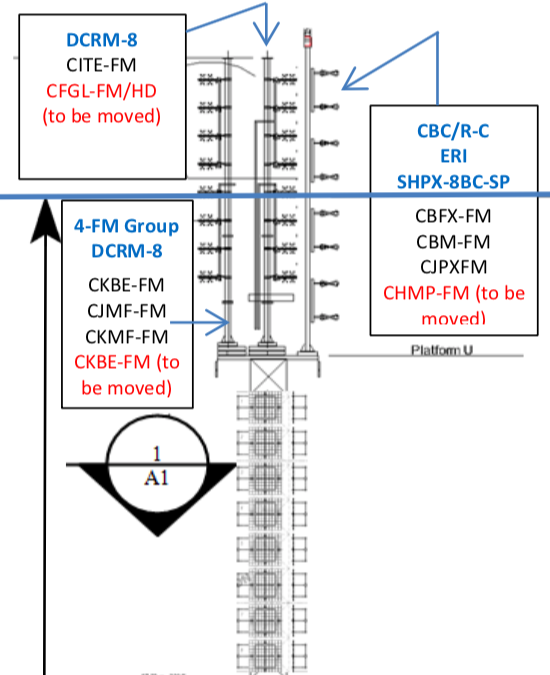 With a vacancy on its upper platform FM antenna, CBC/Radio-Canada has moved CBM-FM (CBC Music 93.5) there, maintaining its power at 100,000 watts. The two other FM transmitters have Bell’s stations — one has just CITE-FM (Rouge FM 107.3) and the other has CHOM, Virgin and Énergie.

Below, as best as I can piece it together (so there may be errors), is the full list of FM and TV stations (and their auxiliary or standby transmitters) on the Mount Royal Antenna, from top to bottom (heights are given as centre of the antenna measured from the base of the tower):