The legal battle between Radio Centre-Ville (CINQ-FM 102.3) and a group of dissidents over control of the community station is over. But the emotional repercussions of the bitter three-year dispute will likely continue for some time to come.

The case was finally heard on Monday before judge Marc St-Pierre at Quebec Superior Court. But after hearing from only two witnesses, the plaintiff, representing the dissidents, proposed abandoning the lawsuit, which was quickly accepted. (Both sides pay their own legal costs.)

The dispute started in the fall of 2016, with a proposal by station management that, to control a financial crisis that risked pushing the station into bankruptcy and losing its building on St-Laurent Blvd., it begin selling airtime to independent producers. That proposal may or may not have been rejected at a general assembly of members in September 2016, depending which side you talk to.

Two other general assemblies followed, one in December 2016 and one in January 2017, to elect members to the station’s board of directors, and each side says the other one was illegal. Since then, the two have continued to battle for control, each with its own board — General Manager Wanex Lalanne and his allies remained in control of the station itself, while the dissident group was the one listed on Quebec’s business registry, and had control of the station’s Facebook page. The dissident group also often got its messages broadcast on the station, as well as through other media like CKUT. 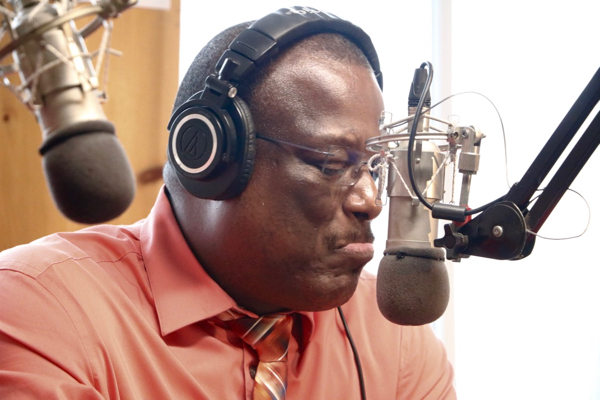 To say the battle has been acrimonious would be an understatement. During a press conference broadcast live on-air on Tuesday, Lalanne and his supporters talked about defamatory statements made against him, and Lalanne did not discount the possibility of a civil lawsuit for defamation. (The threat of such a countersuit may have been a factor in the dissidents deciding to drop their case.) Lalanne said he would take some time to recover from this ordeal before taking such decisions, and it’s up to the station’s board of directors as far as the next steps on behalf of the organization.

Lalanne became emotional as he began his statement, later saying the sense of relief after a three-year battle had gotten to him. He thanked his family, his colleagues and his supporters for their support. “I never felt alone in this adventure,” he said, holding back tears.

“The dissidents labelled me a fraudster, dictator, thief.”

Those dissidents, primarily from the Spanish group within the station’s membership, with support from members of the anglophone group and others, were dejected at the courthouse on Monday, throwing in the legal towel after several animated discussions with their lawyer. The hearing was delayed twice for settlement talks, not including those that took place over the lunch break. The talks were private, but apparently involved discussion of another assembly with an independent observer, as well as a formal apology.

With no settlement apparent, “we decided to fight tooth and nail,” said Radio Centre-Ville’s lawyer Marco Vitale, and they were ready to present their evidence.

But with a judge who apparently was unsympathetic to their arguments, and a lawyer who seemed convinced he was unlikely to win, the dissident group agreed to drop the case.

What this means now is unclear. Lalanne and the radio station called on the dissident group to hand back control of the Facebook group, and will undertake to get the record on the business registry corrected. And while Lalanne and lawyer Vitale said they want to do what’s best for the station, others present argued that the dissidents have done too much damage and should not be allowed to return.

The station estimates it spent $40,000 in legal fees and increased security at the station, money it didn’t have to spare. And that doesn’t include the lost ad revenue from those who were too confused or scared off by the internal conflict to buy advertising.

Radio Centre-Ville has paid off its debts, and “the situation is improved,” Lalanne said, but there’s no guarantee a new unexpected expense won’t send it back to the precipice.

Lalanne reiterated that the sale of airtime was meant as a transitory measure, though he does not have a timeline for ending the practice. Doing so would require a different source of income, and he doesn’t want to repeat the mistake of relying too much on handouts. Radio Centre-Ville’s reliance on a grant from Centraide, which expired in 2016, led to the crisis in the first place.

“We’re not closing the door, either,” he said.

The dissident group hasn’t yet agreed on a public statement, and their lawyer did not return a request for comment.

But from what those dissidents have been telling me, there is no desire whatsoever to bury the hatchet with Lalanne. They see him and his allies as a threat to the community nature of the station, and are committed to fighting that threat. They just don’t know how to do it now.