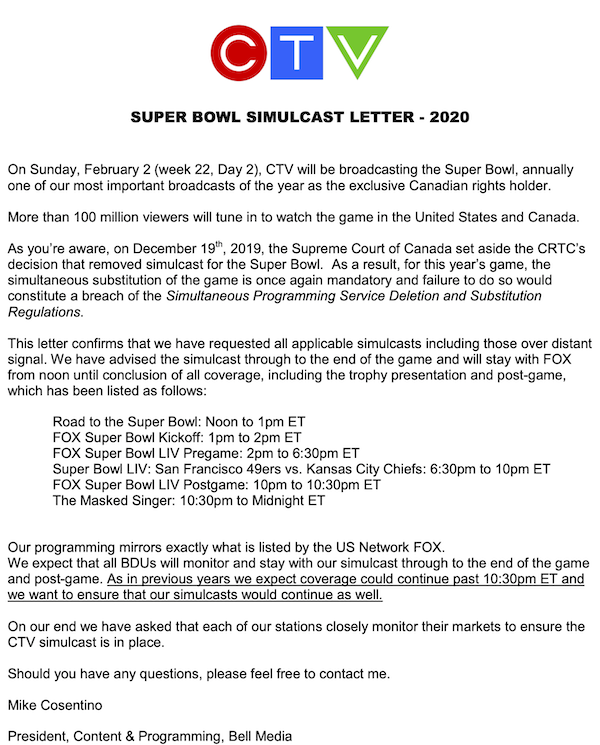 Letter from CTV to TV providers, provided to me by a helpful source

The free ride is over. Thanks to a Supreme Court ruling that the CRTC had overstepped its authority in the way it created an exception to simultaneous substitution rules, CTV will once again be taking over the U.S. feed for the Super Bowl on Sunday for Canadian cable and satellite TV subscribers.

And that means Canadians will be looking for loopholes to get around those rules. So here they are.

Get it over the air

The simplest way of getting a U.S. network signal on Super Bowl Sunday is to pick it up over the air with an antenna. The government can stop a lot of things at the border, but the electromagnetic spectrum isn’t one of them.

This year, the Super Bowl is being carried on CBS, which is good for Montrealers because WCAX-TV in Burlington has a 423-kilowatt transmitter on top of Mount Mansfield. If you have a TV with a digital tuner and an antenna positioned well enough to capture a signal from across the border, WCAX is on Channel 20, or virtual channel 3.1.

Other CBS stations near Canadian borders include:

Move out of a substitution zone

Simultaneous substitution is only required in the local broadcast area of the Canadian station. So people in areas without a local CTV station might be able to get an unsubstituted U.S. signal.

For CFCF (CTV) in Montreal, that means these areas:

Quebecers outside of Montreal (as defined above) and the Gatineau region (which is part of the footprint of CJOH Ottawa) should not have their signals substituted.

Note that if you have satellite TV, your signal may be substituted regardless of where you are, or the American signal blacked out.

These are technically illegal in Canada, but many people have found ways to get service north of the border, either by pirating them or using fake U.S. addresses. Since these are American providers, the CRTC doesn’t control them.

The only legal way to get the Super Bowl itself online is through CTV, TSN or RDS. You need to be a subscriber, either through your cable company or through TSN/RDS Direct, to get access to the feeds. And, of course, you’ll get the Canadian ads.

But while streaming the game online is hard, watching the ads isn’t. YouTube has a special site devoted to Super Bowl ads that you can watch whenever you want, in high definition. They have promised to make the ads available as soon as they air on TV, and some are already there. You can pair watching the Super Bowl on TV with watching the ads on YouTube, though that can be logistically annoying if you’re hosting a party.

In the past, some bars have either taken advantage of loopholes or set up antennas to get the game with U.S. ads. If you see one that’s promising that, feel free to share it below.

There are methods that have no guarantee of success. You could try watching west-coast feeds. Some cable companies offer Seattle stations as a way to time-shift, and then forget to do substitution for live events like this. But broadcasters have become wise to people using this loophole. Videotron is certainly aware of it and will be substituting this channel.

I’ve seen no shortage of people bragging that they have a $5 subscription to SportzFeedz.whatever that lets them stream whatever they want. Understand that these are pirated feeds of U.S. stations, and though you might not get prosecuted for watching them, they’re still illegal and unreliable and could shut down at any time when copyright holders manage to catch them.

You could also, I suppose, just go to Vermont or New York for the weekend and watch the Super Bowl there.

Or just watch the Canadian ads

They’re not all awful.