Local news is vital. It provides an essential service, especially in times of emergency. People rely on local broadcasters to provide them up-to-the-minute information told by local journalists.

So what does the CBC do during an unprecedented public health crisis? It shuts it all down.

The public broadcaster announced Wednesday that effective immediately it is “consolidating” its TV news coverage, and replacing the 6pm and 11pm local newscasts at all of its stations (except CBC North, which provides news in Inuktitut) with CBC News Network.

According to a memo sent to staff this morning, the decision was made because of a lack of staff at CBC’s Toronto Broadcast Centre, which handles master control (why it has a lack of staff is not explained), as well as “much stricter newsgathering protocols.”

Here’s the memo sent out today to CBC staff. An official announcement should be released shortly, CBC tells me. pic.twitter.com/vXtB7GqjOX

Why stricter newsgathering protocols would require centralizing TV news but not radio and digital is also not explained.

A story of this magnitude — one that changes by the hour — places incredible demands on our staff and our infrastructure in order to get the most accurate and up-to-date information to audiences. Television is especially resource-intensive, and many jobs are difficult to do at home. Our systems are overtaxed, and we had to make adjustments as a result.

So, we made the difficult decision to temporarily lessen that load and consolidate production to ensure we can continue providing an essential service to Canadians.

I summarize the memo and some reaction to it in this story at Cartt.ca. And this Day 2 followup.

CBC Radio is unaffected, and local newsrooms will still be pumping out news for their digital platforms. Radio-Canada tells me it has no plans to suspend newscasts for its 13 local TV stations.

But needless to say a lot of people are pissed about this decision. That includes PEI Premier Dennis King, since PEI does not have local newscasts on private television stations. (CTV and Global cover it out of New Brunswick.) He issued a statement on Twitter demanding the government intervene.

I asked the heritage department if they plan to intervene. Its response stressed that CBC is an arms-length organization, but the minister did speak to the corporation.

It’s unclear if the CBC is even allowed to do this. The conditions of CBC’s licence, last renewed in 2013, require it to produce 7 or 14 hours a week of local programming, depending on market size, and “each station shall broadcast local news seven days a week each week, except holidays.”

The CRTC has not made an exception to those conditions (which is possible — a similar exception was granted just this week for the Olympics later this year). Asked to comment, the commission says it’s “monitoring the situation” and urges Canadians to follow local news through radio and digital means.

CBC’s head of public affairs Chuck Thompson says the CBC has “been in touch with the CRTC” about the change.

Meanwhile, CBC Montreal anchor Debra Arbec says she is “deeply sorry to let our viewers down” but reassures viewers she’s still on the job:

In fact, Arbec hosted a 15-minute local newscast that was broadcast solely online, making me wonder why they couldn’t have just aired that on TV instead. Similar newscasts were put together by CBC Manitoba, CBC Nova Scotia, and in a less polished way by CBC Windsor. Ottawa and Toronto also did mini updates, and Saskatchewan had a portrait-mode version.

Local and national news is critical in a time of crisis and CTV News is continuing to deliver. In response to COVID-19, we have enacted a number of different measures to protect the health of our journalists and crew, including social distancing in the workplace, enhanced technology, and working from home where possible. Contingency plans responding to many different scenarios are in place that will allow us to continue providing news and information to Canadians without compromising the health of our employees.

When centralization breaks down

Despite all the people I’ve heard from, it’s been hard to pin down exactly what the cause of all this is, but here’s what I’ve been able to piece together:

Since the start of the COVID-19 crisis, there has been a surge of live events. Press conferences from premiers, the prime minister, public health departments, businesses and others. Multiplied by 10 provinces each doing their own thing, plus the federal government.

On the other side you have the Toronto Broadcasting Centre, which routes traffic for CBC’s English TV stations. At the same time as it’s overloaded by video traffic, it is facing constraints because of absences due to quarantines. At some point it reached a breaking point, prompting this decision.

This wouldn’t be an issue if CBC hadn’t centralized so much of its technical operations. If local stations truly controlled their own broadcasts, they wouldn’t need Toronto. Under normal circumstances, centralization saves money and staff and works well enough. But when a crisis happens, this system has a huge vulnerability.

CTV, Global and Citytv have also centralized production to varying degrees, but none of them have made moves anywhere near as drastic.

I watched the first day of the CBC broadcasts, and was not impressed with what I saw.

At 6pm, viewers in Quebec and Ontario were treated to Vassy Kapelos in mid-conversation with NDP leader Jagmeet Singh. She welcomed the central viewers and then completed the interview.

Next was 5 minutes of a press conference from B.C. that ended suddenly when the feed went dead. Then a check-in with CBC Toronto gave us two and a half minutes of Toronto/Ontario news, followed by 90 seconds of Montreal news with Debra Arbec.

After a commercial break, we were back to the B.C. press conference, during which a question was asked (and answered!) in French but CBC didn’t have translation ready for it. Finally, an interview with a physician took us through the end of the half-hour.

So Montreal viewers tuning into their 6pm local newscast got a total of 90 seconds of local news. And Ottawa viewers got a grand total of zero.

For the 11pm newscast, they didn’t both checking in with local anchors and just replayed The National, even though that’s what airs from 10-11. The only nod to local information was adding the on-screen console graphic that scrolled through local news headlines, weather and traffic.

CBC’s 11pm local newscasts have basically been replaced by reruns of the episode of The National that just finished, but this time with local weather, a handful of local headlines and that all-important 11pm live traffic camera pic.twitter.com/61bQacuji4

I understand we’re in an exceptional situation, but CBC has staff in newsrooms across the country who are eager to meet the challenge the situation brings. Instead of trusting its newsrooms and local staff to find solutions to keep their newscasts going, CBC management has made a national decision to pull the plug across all 10 provinces.

Hopefully they will quickly develop a way to bring local news back. Because the last time CBC tried replacing local newscasts with a national newscast that they sold as a hybrid, it did not end well, and drove thousands of viewers away.

Friends of Canadian Broadcasting has started a petition to get the heritage minister to overturn the CBC’s decision.

Whatever the CBC needed to do to bring local news back, it looks like they’re ready to start. On March 24, six days after the sudden suspension, it announced what appeared to be a timeline: Starting March 25, CBC News Network will offer “expanded” 30-minute local news segments. And “over the course of this week and next, we will make every effort to have all of the dedicated local shows back up on the main network.”

CEO Catherine Tait told The Current the news would come back Tuesday, leading to some anger online after that didn’t happen. 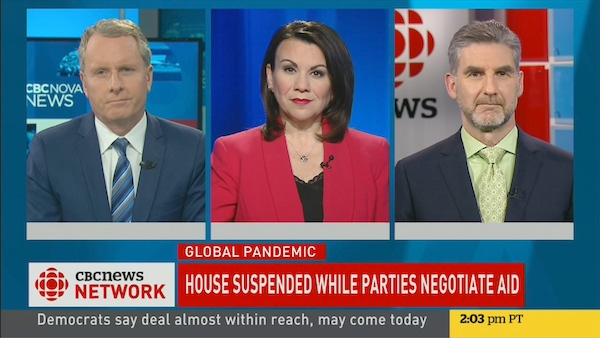 Three anchors wait their turn on CBC News Network and CBC Television: Nova Scotia’s Tom Murphy, P.E.I.’s Louise Martin and New Brunswick’s Harry Forestell. Each one got three and a half minutes for local and regional news.

Over most of the first six days of the national/local system, CBC made use of time zones, and regionalized CBC News Network content depending on which one was at 6pm: First, news from Newfoundland and Labrador at 4:30pm ET, then the Maritimes at 5pm, then the next hour from Ontario and Quebec (Ontario at 6pm ET, then Quebec at 6:30pm), then Manitoba, then Alberta and Saskatchewan. In each case, local or regional news was delivered by local anchors, and most lasted about 10 minutes.

By the time Vancouver reached 6pm though, it was 10pm in the Maritimes, so it was time for the first run of The National. Rather than run a non-local newscast out west, CBC restored Vancouver’s local news first.

The National, which also replaced local 11pm newscasts across the country, did not contain any specific local news segments.

UPDATE (March 25): Newfoundland got its local 6pm newscast back on Wednesday, while the rest of the country except B.C. and the North still had to settle for local segments piped through CBC NN. (B.C. had 20 minutes of local news before joining The National in progress.) PEI’s Compass has promised to return as of Thursday.

UPDATE (April 6): All but four of CBC’s stations had local 6pm newscasts again by April 2, with Windsor still piggybacking off CBC Toronto, and Saskatchewan and Alberta served through CBC News Network, which ran about 15 minutes (total) of regional news every night at 6pm MT. CBC spokesperson Chuck Thompson told me the plan was to get the rest back early in the next week, aiming for Monday, April 6. And indeed, all the remaining stations had their newscasts back on Monday.