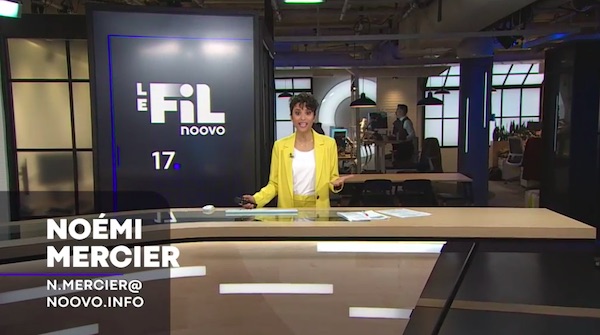 In the lead-up to its launch on March 29, Noovo (formerly V, formerly TQS) hyped that its new daily newscast called Le Fil would be, above all else, different.

After two weeks of watching these programs, I can conclude that it’s definitely different. In some ways that are good, but in many ways the difference is a stark reminder of how few resources are being put into news-gathering at the network, even though its new owner Bell Media has extensive English-language resources across the country, francophone journalists at radio stations across Quebec, and lots of money.

Rather than being an alternative newscast to TVA and Radio-Canada, it might be more fair to say Le Fil isn’t even in the same league, and isn’t trying to be.

A recap of what led to this: TQS, founded in 1986, was the first television network to try to compete directly with the duopoly of Radio-Canada and TVA in Quebec. It was owned by the Pouliot family, who also owned CFCF (CTV Montreal) and CF Cable.

Its newscast, Le Grand Journal, promised to be different, but looking back seems very generic — an anchor in a studio, tight two-minute packaged news reports with reporter voiceover, and weather and sports.

TQS would eventually be bought by Quebecor, but then sold because Quebecor bought Videotron, which owned TVA. Cogeco and what was then Bell Globemedia bought TQS in 2002 (with Cogeco as the controlling owner) and injected money into its news operation, but by 2007 Cogeco gave up and pushed the network into bankruptcy.

It was bought by Maxime Rémillard, a film producer and distributor, who disbanded the entire news operation and renamed the network V. Rémillard convinced the CRTC to drastically reduce the network’s local and news programming requirements in order to keep it alive, and tried various cost-effective ways of doing the bare minimum of news programming, with forgettable newscasts like Les Infos and NVL that were outsourced to other companies.

Rémillard’s massacre of the news operation was heavily criticized, but it worked. V stopped bleeding money and managed to survive.

Le Fil is a series of newscasts:

For all of them, the structure is pretty simple: five-minute blocks, either packaged reports, often introduced by the journalist, or perhaps an in-studio chat with a journalist or a columnist.

The biggest difference between this newscast and a mainstream one is how it tells stories. Rather than a standard two-minute heavily narrated package including B-roll of people walking and ending with a reporter standup, these packages are about five minutes long, adopting a slower pace, and let their subjects do a lot of the talking. Almost like a mini documentary. Many packages include music, to further accentuate that feel. The reporters are also present, but more casual and engaging in how they talk to the camera.

There are “live” chats between the anchor and the reporter, either in studio, or via double box, and I notice the reporters tend to be introduced by first name only.

The rough edges can be seen in the reports, which often show technical issues that I have difficulty just dismissing as first-week flubs or COVID-19 compromises. Subjects in interviews often don’t have a microphone on them, leading to poor-quality audio. This probably wouldn’t have been an issue if they hired both reporters and experienced camera operators who would be more concerned with those technical aspects. Many reports are done entirely by the reporters alone.

The other big difference Noovo highlights in its approach to this newscast is diversity — not only of its staff, where two of four anchors are Black, but of the story subjects. They spend more time talking about issues facing young people, racialized communities, Indigenous communities. I don’t know if they’re necessarily covering these issues better than their well-funded competitors, but that’s where they’ve decided to put their focus.

Being a brand new operation, most of their journalists are pretty young, and so much of this focus on different types of stories may come naturally. 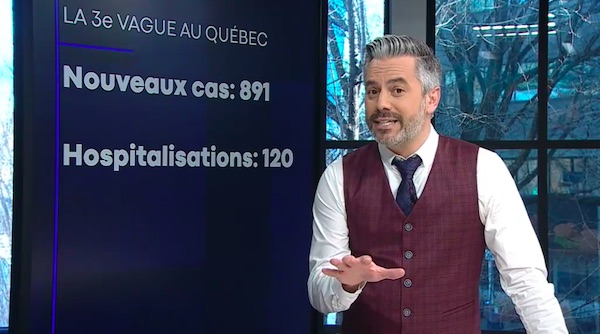 Michel Bherer next to the window in the Montreal studio. 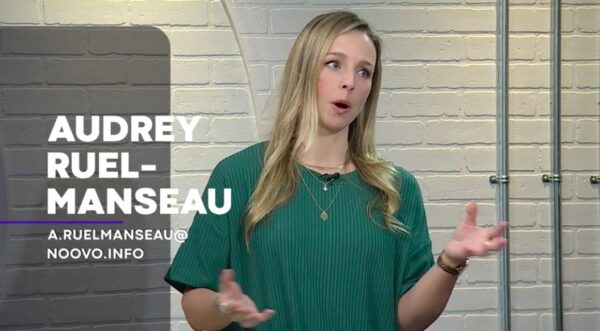 Reporter Audrey Ruel-Manseau on the side of the anchor desk in Montreal. 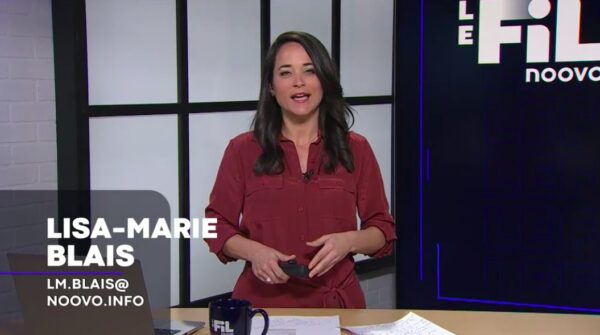 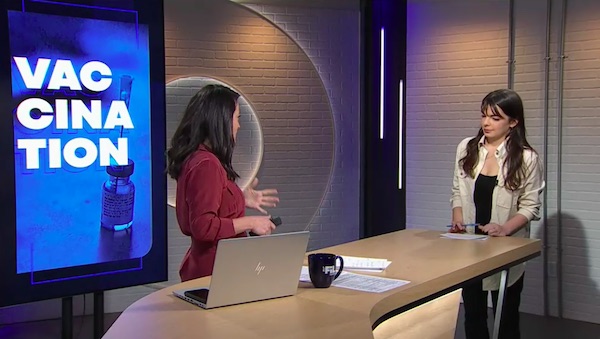 I suppose Bell Media was trying to get away from the standard TV studio look with its design for the studios in Montreal and Quebec City. It’s very industrial, like you might expect for a tech startup or something. White-painted brick, exposed metal conduits, a light wood desk, coloured lights, vertical screens. I’ll give them the benefit of the doubt that they were going for something new and cool, but it comes out to me looking a lot like moderate-budget community TV. 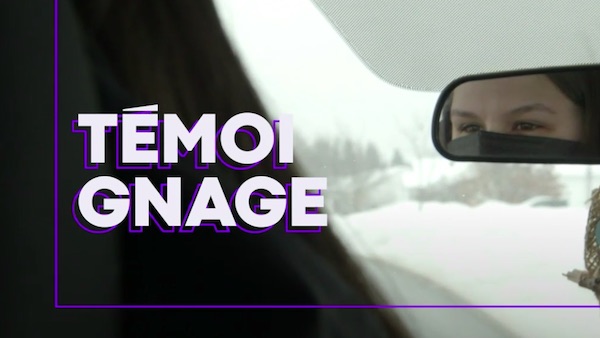 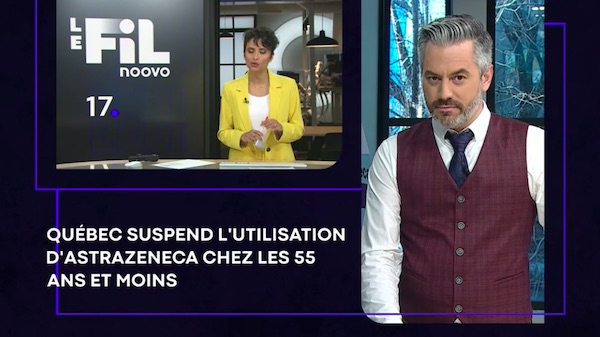 The graphics are better. Bold white text on dark blue backgrounds for the most part. Overlays are squarish on the side rather than going along the bottom.

No weather or sports

Despite being built by the same company that runs CTV News, there’s very little of the usual building blocks of a newscast. There’s no weather report, no sports highlights (Bherer briefly gives out the final score at the end of the night when the Canadiens play), no market numbers, no entertainment news, no stories from foreign news services, and no ambulance-chasing fire and car crash briefs.

Bell owns RDS (in fact, the two broadcast out of the same building), so it would not have been difficult to incorporate a sports component, so it seems this was done intentionally. And honestly, it would have been odd to shoe-horn something like sports highlights into this show. 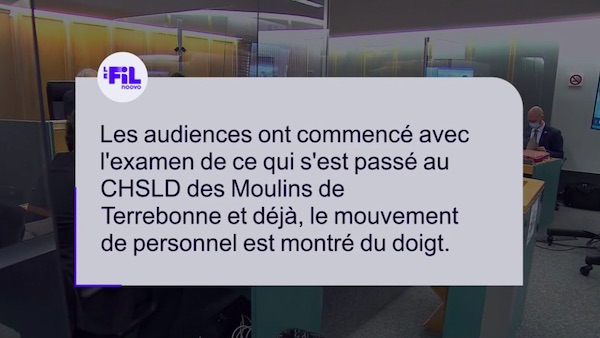 News briefs are often presented on screen with no visuals or only a faded still image to accompany them — literally the text of the brief is presented as a graphic as the anchor reads it. They’ve gotten a bit better at this as the days went on, with some briefs presenting visuals now, but it’s an odd thing to see so much text in a newscast.

One thing I have seen a lot of, though, is vox pops. For a newscast that promises to do things differently, adopting one of the news media’s laziest, most useless forms of journalism — asking random uninformed people on the street what they think of some topic — would be a head-scratcher if we didn’t already know why it’s done. It’s an easy crutch for an uninspired assignment editor.

They’re not in every newscast, but in less than three weeks I’ve seen a handful of them.

Even the regional cutaways involve a lot of reuse. The 15 minutes mean they have three stories. But for most of the regions, the third story is common, regardless of what region it comes from.

So for the Mauricie, Saguenay and Estrie regions, we’re talking about 10 minutes per weekday of actual original local news. Less than an hour a week.

Since Bell has not deemed those three regions worthy enough to even have their own anchors or studios, it’s probably unsurprising that even their local news isn’t that local.

The first broadcasts of Le Fil got just over 100,000 viewers, according to Richard Therrien of Le Soleil. That’s relatively decent, but also a lot of curiosity factor. Later broadcasts got smaller ratings.

I would have liked them to, say, push the late newscast to 11pm and offer some counter-programming in the 10pm hour. Or try to do something more with the weekend news than an hour-long in-case-you-missed-it.

I can’t say Noovo really sets itself apart by promising its news will be on a bunch of platforms, since everyone is doing that now, but it’s worth noting here. At the moment, there isn’t much along these lines. Packages and newscasts are posted to their website, a few clips are posted to YouTube, and they have Facebook, Instagram and Twitter accounts, and now TikTok too.

A new Noovo Info website is promised to launch later, which will give a better idea of the digital facet of this operation. By then, Bell will probably have found a way to integrate its journalists at Rouge and Énergie radio stations throughout Quebec into the system, and maybe even found some synergies with CTV and CTV Montreal in particular.

So with some aspects still marked incomplete, and taking into account the usual early-day bugs that will work themselves out as everyone gets more familiar with the daily routine, I would rate Noovo Le Fil as … OK.

Noovo doesn’t have the same news resources as Radio-Canada and TVA, which both have all-news channels and close relationships with other journalists on different platforms (Radio-Canada has digital and radio journalists, while Quebecor has the Journal de Montréal, 24 Heures and other platforms for journalism). But Bell has deep pockets, so if it wanted to, it could create a new competitor on that same level.

As a news operation, it’s definitely better than what it replaced. As a newscast on TV, it’s also better, though probably not better enough to become a real threat to the duopoly of Radio-Canada and TVA. (And we’ll see if, down the line, Noovo’s desire to be different will hold or if it will slowly morph into a similar kind of generic TV newscast that its competitors have settled into over the decades.)

Some of its longer-form documentary-style reports might have some success on digital platforms, I suppose, but it’s really unclear what target audience they’re trying to reach here. Le Fil doesn’t have the flash of TVA nor the reporting depth of Radio-Canada, and despite their promise to be more diverse and reflective, I don’t see that many people who don’t normally watch the news flocking to this show.

Which leaves us with the distinct impression that, despite all the hype, Le Fil exists not because Bell wants to shake up the marketplace when it comes to local news on TV, but simply because the CRTC required Noovo produce local news, and this is what they came up with to fill that minimum requirement.

I hope I’m wrong there.

Noovo Le Fil airs at 5pm and 10pm weekdays and 9am Saturdays and Sundays on Noovo.

3 thoughts on “Review: Noovo Le Fil does news differently, with some familiar cost-cutting”