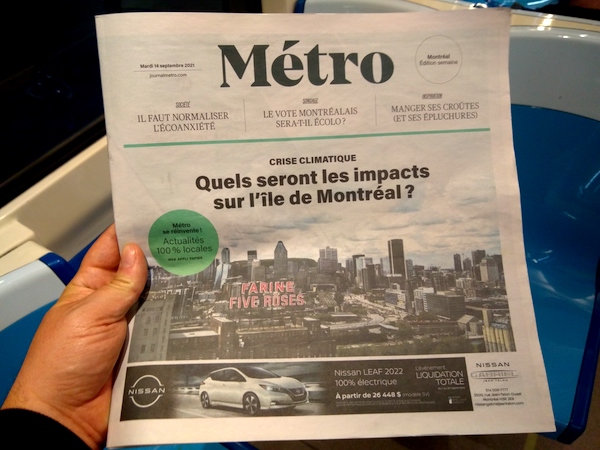 The first issue of the redesigned Métro, its first without the distinctive globe.

It’s been several years that the newspaper has had no official link to Metro International, the Swedish publisher whose brand has been used on free commuter newspapers in large cities across the world since 1995. (Transcontinental took full ownership of it in 2012, before selling it to businessman Michael Raffoul in 2018.) So it was overdue for a design change.

But Métro went further than just changing its logo. Its entire raison d’être has changed. Mulé explains the changes himself in Métro, and shares some more insight with me below.

When it first launched in Montreal in 2001, Métro was filled with short easy-to-digest stories, most of them from news wire services, that gave morning commuters a quick idea of what was in the news that day.

Transcontinental’s community weekly newspapers, of which there were many throughout the country, were operated separately, with budgets and staff that shrank drastically as the years went on until some of them, like the West Island Chronicle, Westmount Examiner and N.D.G. Monitor, simply ceased to exist. Those that were left shared a lot of content with each other and, increasingly, with Métro. When Transcontinental divested the last of its print newspapers, Raffoul took Métro and the community papers in Montreal, and the integration continued until they finally took on a shared brand and website.

A lot of other things have changed since 2001. The rise of smartphones, and the installation of wireless network access throughout Montreal’s metro tunnels, mean people can get news on their devices instead of having to pick up a paper. The decline in print advertising has put a strain on revenue for newspapers in general, and free ones in particular since that’s their only real source of income. Free commuter daily newspapers, including Metro, disappeared in the rest of the country two years ago. In February 2020, Métro cut short its exclusivity contract with the STM so it could redirect money elsewhere, and now both Métro and 24 Heures are available inside metro stations.

And, of course, there was the pandemic, which caused the number of people using public transit to plummet. Métro temporarily laid off 40% of its employees, and reduced its printing schedule. Last summer it stopped publishing for three weeks.

“Métro lost a lot of readership because of the traffic in that period, however our weeklies took a lot more importance in that time,” Mulé told me. After investing in bringing local content back to both Métro and the community papers, Métro Média rebranded 19 of its 20 community papers to the Métro branding. (Corriere Italiano still keeps its Transcontinental-era logo.) With this latest change, the community publications have also been rebranded in the same way, and are essentially hyperlocal weekly editions of the Métro publication. 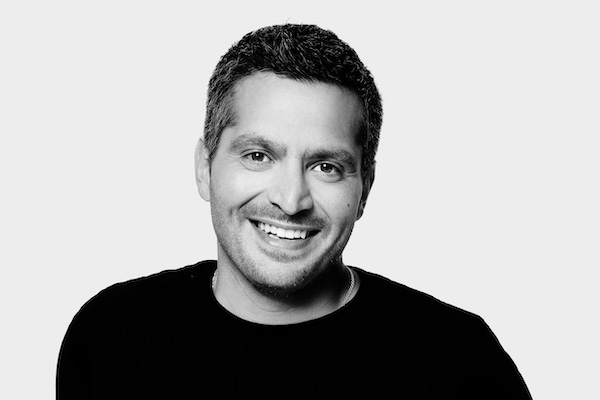 Mulé said the changes were in the works before the pandemic began, but COVID-19 forced the project to the back burner.

“We had a new strategy to put in place just before the pandemic, and then we had to focus on managing the pandemic and all the content around it,” he said. “We didn’t really focus on this plan until August 2020, but those five months were crucial because they also highlighted that our hypothesis was bang on, that the community focus was the most important part of this.”

It’s been about a year now that Métro has no longer made use of The Canadian Press or other wire services for its content. It relies on its own team of about 40 journalists, who are younger (average age of 31) and more focused on local topics. 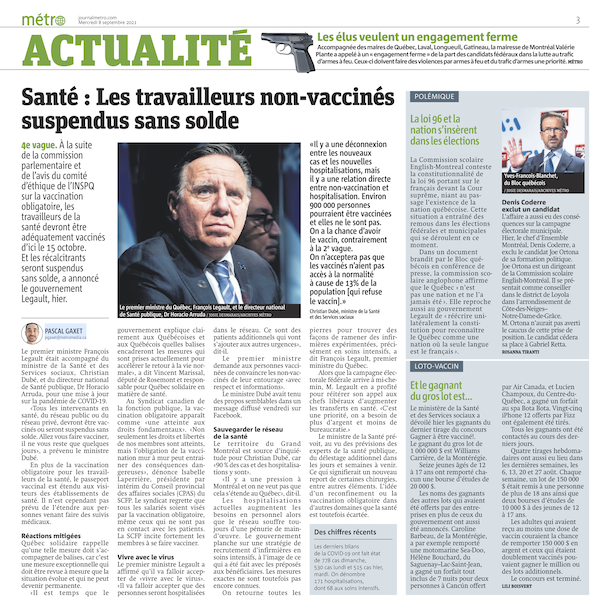 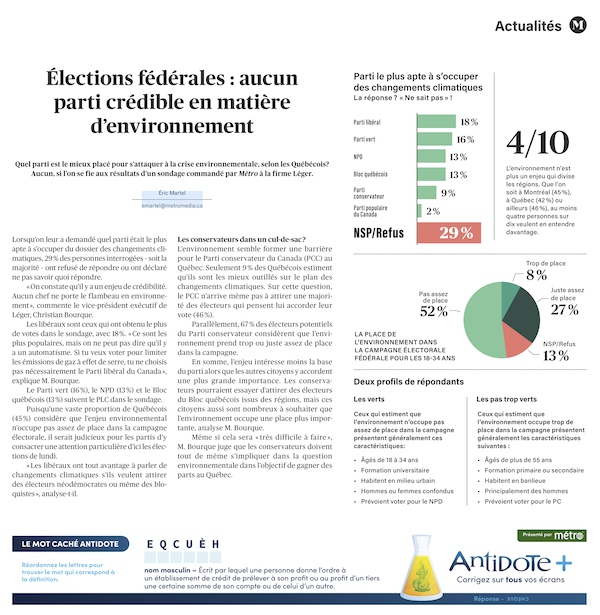 It’s hard to understate how much of a change this is. Instead of cramming every available square inch with briefs, the paper now has a more magazine-like feel to it and stories are given space to breathe. Instead of fitting in every story of the day, there’s more analysis, more features. Graphical elements like charts are much more common.

Gone are the puzzles and horoscopes at the back of the paper, replaced in part with content for children through partnerships with Le Curieux and Auzou. “We wanted to bring news in a digestible format for kids and we thought that that same content is also digestible for adults as well,” Mulé said.

“We’re really trying to highlight good information and be a tool for Montrealers every single day.”

The topics being discussed in the news stories have also shifted. Less of the headlines of the day you’ll hear about on the 6pm news, and more feature stories on what Métro calls its pillars: social issues, the environment, entrepreneurship, culture and diversity.

“A lot of effort when into the decision on the content pillars,” Mulé said, explaining that the team of journalists was involved in this process. “The environment was a key one, we saw that this is an important dossier to talk about regularly for our readership. … Values are important in our newsroom.”

All these changes might seem a bit familiar to anyone who has noticed what happened to Métro’s main competitor 24 Heures. In February, the Quebecor-owned free commuter newspaper moved to a weekly publication schedule and a more feature magazine-style layout and a focus on social issues.

Métro’s transformation was underway long before that change, and Mulé is quick to point out the differences between the two and says they are “absolutely not” competitors in his view.

For Mulé, the local focus makes Métro unique, not just here but across Canada and even the world, being a non-subscription free daily newspaper with 100% local news.

“I’m inspired by what other media are doing,” he said. “I think Le Devoir’s turnaround over the past four years is unbelievable and I find it amazing.”

Shift to the app

It’s become a bit of a cliché for newspaper companies to see themselves as digital-first these days, but Mulé said that’s where Métro is heading, and a big step in that was the launch of new apps for iOS and Android along with the paper redesign.

Most of it is the same as you’d see in any news app — a top stories feed, sections, saved stories, etc. But Métro also banks on its hyperlocal focus, giving people news relevant not just to Canada’s second-largest city but to their individual borough.

Mulé said the company went through “a bit of an identity crisis through this process,” which makes sense considering the radical transformation.

“We don’t want to be defined by a print product that sits in the metro system,” he said. And the digital products are already taking over from the print ones in terms of readership.

Métro reduced its print frequency to three days a week during the pandemic (Tuesday/Wednesday/Friday), and with this change it is keeping to that schedule. “I think three days a week is the right number” for the moment, Mulé said, though he left open the possibility that this could eventually change.

But he expressed excitement about a future business model based much more on digital sales than on print ones. Controlling the means of distribution means offering advertisers first-party data on readership, and being able to charge more premium pricing. And the hyperlocal focus means that while bigger media go after the national advertisers, Métro is going to focus more on the local smaller businesses.

“We’re no longer trying to figure out financial stability, we’re now working to find more revenue stability so we can grow,” Mulé said, setting the goal of full self-sufficiency (without the need for government aid that came during the pandemic) by 2024.

It’s more of a coincidence than anything else that the company that produces this free big-city newspaper also happens to produce community newspapers in that city. But Mulé is running with it as if it was designed from the ground up that way.

Not that going 100% local is easy. “Finding good creative talent is a challenge for the industry,” he said. And being hyperlocal makes it even harder.

“If I could double my resources, I still wouldn’t be able to cover municipal content for the island of Montreal adequately,” Mulé said. “That’s the situation. Here we have 2 million people on the island of Montreal and between all the media, we are always the only people at the borough council meetings, we’re the only people at the dog parks and talking about what’s truly happening in the communities. … This is where you live your life every single day.”

If it sounds like he’s seeing this as a sort of mission, it’s because he is.

“There is a media desert on hyperlocal, but I can help bridge the gap,” he said.

And now that the content distribution system is set up, his next project will be to offer better resources to local economies and businesses. It might not be enough to bring back those 60-page community weeklies of before (and the 40 pages of ads that went with them) but he’d like to have destinations where local communities can connect and local advertisers can affordably and reliably reach their local communities.

Since I had him on the phone and he was talking about growth, I asked Mulé about the possibility of bringing back some of the English-language community publications that Transcontinental killed during the worst of cost-cutting, including the West Island Chronicle and Westmount Examiner.

Mulé pointed out that about a half-dozen publications include content in English, particularly where it makes sense to target an anglo audience (such as news about English school boards).

“I strongly believe in the importance of a strong medium in those communities,” he said, but there’s nothing on the horizon to compete with The Suburban’s West Island edition or the weekly West Island section in the Montreal Gazette (my employer). “The Suburban and the West Island Gazette do a decent job, but it’s not enough,” Mulé said.

“If there’s an English sector in Montreal that’s poorly served with information then maybe there’s hope, who knows?”