My request was simple: Don’t vote for me in the sad popularity contest that is the Mirror’s Best of Montreal readers’ poll. Instead, it appears, someone did do exactly that because I came in eighth.

I’d say I was honoured, but I placed just below Drunken Stepfather. That doesn’t exactly fill me with pride.

Still, congrats to those who did end up on the list, especially those who didn’t use their blogs to inflate their votes (Montreal City Weblog, Spacing Montreal, Pregnant Goldfish).

I should also point out some other blogs on that list, which I’ve never frequented because they aren’t about the city, but are still interesting:

I also think Coolopolis should have been there somewhere, as well as some francophone blogs. But this is about popularity, not quality, right?

As for the rest of the poll, nothing is particularly surprising for anyone who’s seen BOM results before. Chain restaurants still dominate the best eats categories (McDonald’s is there twice).

In the media categories:

And Boustan, who also mounted a self-promotion campaign to improve its standing, maintained its dominance in the Middle Eastern categories, improved in others and added two new ones:

However, people weren’t convinced enough to vote for it as Best Fries or Best Vegetarian.

It’s that time of year again, when the city’s wannabe-next-hot-things measure their penis sizes and get all their friends to vote for them in the Mirror’s Best of Montreal poll.

It’s not just the bloggers this year that are shamefully pimping themselves and their friends. As I stopped by Boustan this week for my garlic-sauce fix, I was handed a card encouraging me to vote for them in every category they could think of (except, perhaps, best celebrity or Montrealer closest to sainthood). They were also stapled to all deliveries. 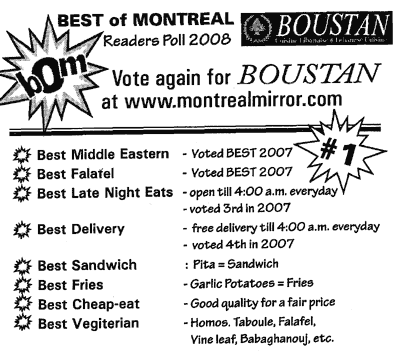 Boustan actually does pretty good in the BOM poll without the effort. Their proximity to Concordia puts them in touch with the Mirror’s key demo (young anglos), and the delicious food and friendly service makes them a favourite of everyone who’s been there. Last year, they came in third in Best Late-Night Eats, fourth in Best Delivery, and first in Best Middle-Eastern and Best Falafel. Unsatisfied with a mere two first-place finishes, they’re looking to expand, making the case for the Best Sandwich, Best Fries, Best Cheap-Eats and Best Vegetarian categories.

As for Best Blog, a category I was sadly shut out of last year, I’ll buck the trend and encourage my readers not to vote for me. Instead, I’ll point to some better Montreal-based blogs that are more deserving of your votes and who (so far) have shown the class to not beg readers to stuff ballots for them. And if I don’t see my blog on that list when the results come out, I’ll know my campaign was successful.

So for Best Blog, vote for (in no particular order):

Remember, The Mirror is not a fan of ballot-stuffers. Be sure to fill out the entire survey with suggestions and not just one category. (And do some research for those please, no Céline Dion or McDonald’s)

UPDATE: I see that within hours of my having congratulated them for not pimping themselves on their blogs, Montreal City Weblog and Spacing Montreal have done exactly that. Therefore, I will encourage you not to vote for them.

*Full disclosure: I work for The Gazette, which produces Habs Inside/Out. So take my praise with a grain of salt.