Canadian University Press, a 75-year-old cooperative of post-secondary student newspapers across Canada, might not live to see its 80th birthday.

Erin Hudson, its current president, is doing everything she can to keep it running, including launching a public fundraising campaign seeking $50,000 in donations. That month-and-a-half campaign ended on Monday, having failed to reach even one fifth of its goal. But the struggle to keep it alive continues.

Canadian University Press started in 1938, and is a national association of student newspapers (despite its name, it also includes papers at other post-secondary schools like technical institutes and CEGEPs, though the vast majority are universities). In exchange for a yearly membership fee, which is on a sliding scale based on a paper’s overall budget — for most it’s a few hundred or a few thousand dollars — CUP provides a range of services.

The biggest one, which many members have historically believed is the only one, is a newswire service. It takes stories submitted by member papers, as well as some original stories written by a national bureau chief and until recently regional bureau chiefs, and distributes them to members so they can be republished in their papers.

But probably the most important one — and the most intangible — is a resource network that can help in times of need. There’s a lawyer that can provide legal advice in case of the threat of a libel suit. There’s a president at a national office in Toronto that can write letters of condemnation if a student union or university administration is trying to stifle freedom of the press. And there’s an email list where members can seek out advice or otherwise communicate with each other.

CUP also organizes a national conference every year, hosted by a different member paper each time. Attendees pay to enter, and it’s open to non-members, but members get a significant discount on entry fees. The national conference, as well as regional conferences, provide workshops and lectures from experts who give invaluable advice to student journalists. The conferences are also how the cooperative organization makes important decisions through a democratic process.

END_OF_DOCUMENT_TOKEN_TO_BE_REPLACED

Last month, I gave a talk to some student journalists from Ontario and Quebec who gathered in St. Henri as part of a regional conference of Canadian University Press.

I occasionally get asked to talk to students, and like most professional journalists I’m happy to do so, because it gives me a chance to help others and because it totally inflates my ego to see so many people look up to me.

As it happens someone was there with a camera and recorded the whole thing.

About half of the talk (which is in English but has questions answered in English and French) has been posted to YouTube in three parts (keep in mind I was low on sleep and didn’t have enough time to prepare a script or even a list of talking points, so you’ll hear a lot of “uhh”s and awkward pauses – the question period is better):

END_OF_DOCUMENT_TOKEN_TO_BE_REPLACED

The Link, a Concordia student-run newspaper that I edited more than half a decade ago, celebrates 30 this year. The paper has a habit of celebrating every five years. I was there for the 20th anniversary, and again for the 25th. Turnover at universities means it’s usually a completely different group of people organizing each one.

As part of their 30th anniversary celebrations, The Link is playing host to a regional conference of Canadian University Press, hosting student newspapers from Quebec and Ontario (emphasis on the Ontario, since CUP is still a mostly English-dominated organization, even in its tiny Quebec chapter).

The conference, which goes Friday night to Sunday morning (but most activities of interest are on Saturday). It is hosted at Concordia’s downtown campus. It’s $7 for the general public to attend (according to the Facebook event page), and free for alumni of the paper.

The schedule is here (PDF). Speakers include:

I promised an aspiring student journalist I’d post this to my blog a while ago, but never got around to it. Apologies if she’s been checking this site every day since.

In March, I was invited to give a talk to a group of students from university newspapers across Quebec and Ontario at a regional conference of Canadian University Press. Unfortunately, I was up against Todd van der Heyden, so my audience was small.

I talked about a few random things, like blogging, copy editing and freelancing. I also figured these kids would like some tips on how to get a job once they graduate, so I dug up my old internship application for The Gazette.

It was the fall of 2004, and I really wanted a job at the local anglo newspaper. I collected clippings (I selected five stories that I wrote, edited and laid out myself), compiled a CV that highlighted my experience in the student press, and wrote a cover letter.

I also included this: 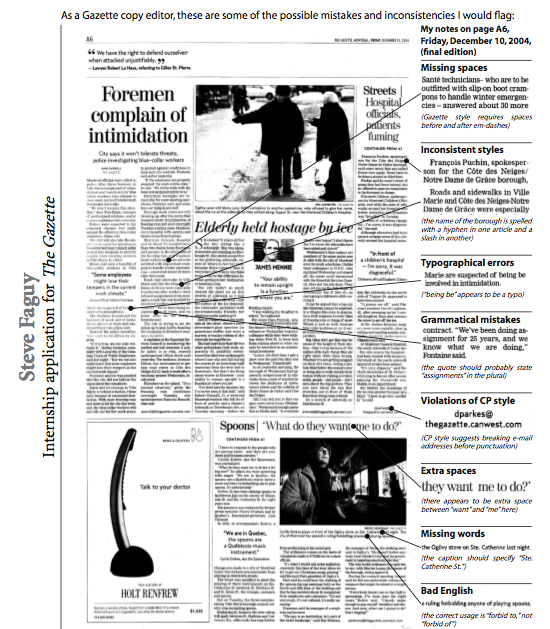 A page from my internship application to The Gazette

Since I was applying mainly to be a copy editor, I figured I needed to demonstrate my skills. I took a page from the newspaper (I went through a couple before I found one with enough errors), scanned it and pointed out things that were wrong with it. It took me hours to lay it out properly, but it was worth it.

In January 2005, when I was interviewed by then-city editor George Kalogerakis, he asked me the usual boilerplate questions (I completely bombed a question that asked me for story ideas – among my answers were “it’s winter … maybe a story about that?”). I quickly learned he hadn’t seen the special page I spent hours working on. Leafing through dozens of applications, it apparently didn’t catch his eye.

I’m not sure what bearing it had in the decision, but I got a phone call while I was at a CUP conference in Edmonton later that month offering me the summer copy editing intern position.

A few months later, when I first met my new boss (who wasn’t Kalogerakis, because he abruptly left for a job at the Journal de Montréal), she identified me as “the one with the page.” As the person in charge of copy editors, she’d clearly been more impressed.

Anyway, enough about how awesome I am. The moral of this story is that when you’re applying for a job, especially in an environment where demand is much higher than supply, you should consider thinking outside the box to get noticed. Companies get dozens of CVs for every job, and even after throwing away those with spelling or grammar mistakes, there are a lot of candidates left to choose from.

I had learned that lesson from Andy Nulman, the former Just for Laughs organizer who has since become an expert in surprise marketing (you can see him with his fly open on the Late Late Show with Craig Ferguson on Tuesday). He had done a television segment long ago (I don’t even remember for what program UPDATE: Nulman tells me it was a five-part special for CBC Newswatch in the mid-90s) about resumés, and said candidates who want to get noticed should eschew the standard resumé for a “presumé” that stands out (within reason of course, it should still have a CV and references). He talked of a CV he’d received that was in an oversized envelope that said “don’t read this” (or something to that effect). Clearly, he couldn’t not read it.

I’ll leave it as an exercise for the reader how this idea can be used to apply for other kinds of jobs.