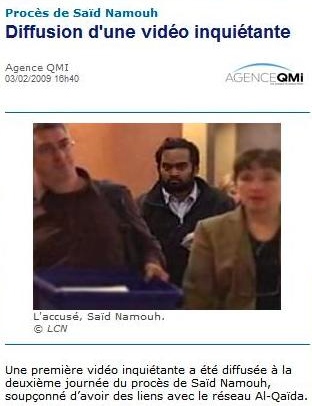 A fellow journalist spotted this on Canoe’s website. It’s a story (from “Agence QMI”) about a man on trial for his alleged role in a bomb plot.

Only the guy in the photo isn’t Saïd Namouh, it’s Sidhartha Banerjee, a reporter for Canadian Press who has been covering the trial.

The photo has since been removed from the story. I don’t know if that’s because someone told them it was a CP reporter, or because someone realized that Saïd Namouh actually looks like this: 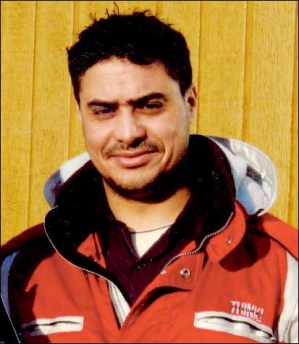 It’s not the first time the news has put up the wrong picture in a criminal case (usually it’s the lawyer being identified as the client), but it’s pretty rare that a journalist gets the rap (especially since most journalists are familiar with each other).

Steve Proulx also has a blog post about this, based off the same screen grab. News has since spread to Branchez-Vous and Regret the Error.

La Presse unveiled its Beijing Olympics blog, noting that it’s sending a team of reporters, including columnist Pierre Foglia, to China next month. (Ten years ago, a newspaper sending reporters to the Olympics wouldn’t be news, but with the industry suffocating and cutting back, every plane ticket and hotel room has to be justified as a Newspaper Reporting Event.)

The Star, meanwhile, is putting links to its Olympics website on every page, including a logo next to its flag. Sadly, the website from Canada’s largest newspaper has about the same design finesse you’d expect from a YMCA bulletin board.

The Gazette’s Dave Stubbs, meanwhile, is still milking the Chinese news sources for weird stories relating to the Games on his Five-Ring Circus blog, which contrasts with Canwest’s matter-of-fact topic page.

The Globe and Mail hilariously has its Olympics coverage in a section called “Others“. Their Olympics blog is better, at least, though I’m not sure what “Wb” stands for in the URL.

The best Canadian Olympics news website unsurprisingly goes to the CBC, which not only has a general Olympics website, but has separate related sites for each major sport at the Games, each filled with stories. These will be the last Olympics the CBC has broadcast rights for.

And for completeness sake, Quebecor’s Canoe portal has yawnable websites in French and English for the Games with stories from its newspapers and wire services.

But even that’s better than CTV’s Olympics website, which doesn’t exist. (CTV has rights to 2010 and beyond, so you’d think they’d take advantage of the opportunity to get some practice online)

Québec solidaire kicked out a Canoe reporter from a Quebec City meeting on Sunday. The reason was simple: the reporter was replacing locked-out Journal de Québec workers, and because QS is all crazy-leftist and such, they’re not about to accept a scab.

But is that an acceptable reason for kicking a journalist out of an open political meeting? Where do you draw the line between legitimate interference and scary Stephen Harper-style cherrypicking of reporters?

I just finished the third episode of TVA’s Vlog, which I’ve been following since its debut with a critical eye.

I find myself liking the show a bit more this time around, partly because of subtle changes made to it, and partly because I think I might have been a bit harsh in my original analysis.

The show is showing more videos I haven’t seen before, and is showing more of them. The hosts also seem a bit more comfortable in their roles, and their banter seems a bit less fake. The fact that host Dominic Arpin is listening to his audience is also worthy of praise.

Nevertheless, there’s still some issues with the show, and I hope Arpin & Co. will take this criticism constructively:

One thing I’ll stop criticizing the show for, however, is using old videos. The Sunday Bloody Sunday video referenced above is good, and many people haven’t seen it. I don’t see any reason it shouldn’t be showcased on the show. (If anything, an old video that’s out of the spotlight will have been seen by fewer viewers than one that’s burning up YouTube.) Unless it’s tied to some dated news event, go ahead and show it.

I’m debating putting that subhead in bright orange just so the powers that be at Canoe figure it out. As far as I can tell, not a single improvement has been made to the website for the show since its launch, despite some very serious problems with it:

All these things need to be dealt with before we can even get to suggestions to improve it (like having an RSS feed with links to all the videos seen in the show).

Shouldn’t TVA know by now that grabbing whatever comes up under Google Image Search isn’t free for you to use as you wish?

Apparently not. On the left here is a screenshot from a TVA news report. On the right is the photo they used, taken by a Montreal blogger who isn’t happy about it being used without his permission. (For those who think it’s a coincidence, check out the train in the lower right corner of the photo.)

Meanwhile, Canoe, the Quebecor-owned web portal, also used the same photo to illustrate a Journal de Montréal story (not sure if it was in the paper itself), though they credited the author, as if that somehow gives them free reign to use other people’s copyrighted work without permission or compensation.

As a freelancer, you can imagine how much this annoys me.