I really can’t not post this video mashup of Jean-Luc Mongrain and Christian Bale (via Lagacé):

And, for the sake of fairness, this parody of Céline Galipeau and Radio-Canada’s Téléjournal (via Arpin): 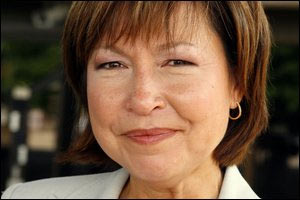 Since I don’t want to be the only person not talking about it, I should mention the big news this week that Céline Galipeau will take over from Bernard Derome in Quebec’s most prestigious news position, anchoring Radio-Canada’s Téléjournal, starting next year. This ironically comes after the Quebec council on the status of women went all pissy on RadCan for moving Dominique Poirier and Pascale Nadeau out of their current jobs. (Nadeau takes over as weekend host of the TJ, and Poirier is considering her options, which include Ottawa Bureau Chief.) The council issued a statement today saying it’s totally cool with this appointment.

So is Josée Legault, who writes today that Quebec is a leader in putting female faces in its news broadcasts.

As for the anglo TV broadcasts, while CBC is still relegating women mostly to the sidelines, Global has Jamie Orchard and (currently-on-mat-leave) Amanda Jelowicki, and CTV has, of course, The Great Mutsumi Takahashi, plus the team of weatherbabes, reporterbabes and weekend anchorbabes (including Lori Graham, who’s currently hosting Good Morning Canada from Montreal).

This isn’t the first time the CSF and its president Christiane Pelchat have put their foot in it. Last year, it famously suggested that the Quebec charter be changed to include a hierarchy of rights, putting equality of the sexes above freedom of religion. It also suggested (and continues to suggest) that people in professional positions such as teachers be prohibited from wearing any visibly religious symbol, except for crosses, of course, because Christianity is the One True Religion.

That said, RadCan hasn’t given a satisfactory explanation for why Nadeau and Poirier are being tossed around. By all accounts they’re very capable journalists and anchors. Were they unpopular? Are new shows being launched to take their places? Do they have to fit Jean-Luc Mongrain in there somewhere? What’s the deal?

UPDATE: Poirier says she won’t move to Ottawa and is quitting RadCan.

UPDATE (June 18): The Globe and Mail covers Galipeau vs. Thibault.