Perhaps the most surprising thing about Cult MTL as the newspaper celebrates its fifth anniversary is how little has changed since it first launched a monthly print edition.

There has been a tightening of the editorial focus, and some experiments that didn’t work out (including a short-lived biweekly publishing schedule), but mostly the publication has stayed true to its purpose: An alternative source for information about local arts and culture for a young audience.

Born out of the ashes of the Montreal Mirror, unceremoniously shut down by owner Quebecor Media in June 2012, Cult MTL began as an online outlet, then a monthly print newspaper very similar to its spiritual (but in no way legal) predecessor. Several of its contributors, including editor-in-chief Lorraine Carpenter, were Mirror employees. Regular Mirror features such as the Best of Montreal readers’ poll and the Rant Line resurfaced.

“I feel that we’re somewhat established as a brand, but it happens fairly frequently that we come across people who have never heard of us,” Carpenter told me in an interview on Friday, noting that the Mirror had 27 years to build its brand (and most of that in an age before the Internet vastly increased the number of news sources). “We still feel pretty fresh in a sense, but a lot of people do know us. One of our continuing challenges is getting the next generation to come to us online and in print as well. That’s why every year we put out the student survival guide and appeal to students.”

Five years in, the paper’s financial situation has stabilized, and its revenues are slowly growing. “We’ve had, especially this year, quite an increase in business,” Carpenter said. “It’s pretty much all local companies with a few exceptions that have been showing us a lot of support.”

She said local cultural institutions, who were hesitant during the first years, are now on board with ad support. “You can see that in the size of our issues this year compared to just last year or two years ago.”

They’re not exactly rolling in the cash, though. Freelance rates are still very low, at $25 to $50 a story, which Carpenter acknowledges isn’t enough. “We’re hoping to raise our rates soon,” she said.

The paid staff is small, with five or six people, working a mix of full-time and part-time hours. There are about a dozen regular freelancers, and many more who contribute rarely or only once.

Carpenter said she’d like to see more. “We don’t get nearly enough pitches from people,” she said. And it’s not because they’re not interested. They get plenty of CVs and proposals to write for them, but “they don’t actually pitch, they just want to be hired and given assignments.”

I asked Carpenter what kind of stories she likes to see pitched to her. “We like to preview events that are coming up in the city,” she said. “We like to include interviews. We don’t generally do these rehashed press-release-type articles or a flimsy photo with a few words. Something a little more substantial.”

Once a month is enough

In 2013, as Cult celebrated its first anniversary, it tried going biweekly during the summer, hoping to double ad revenue. But advertisers, most of whom had fixed budgets, couldn’t just double their buys because the newspaper was printing more often.

“In the beginning, for the first six months of Cult MTL, no one was getting paid,” Carpenter explained. “So just through the advertising money that was coming in, we technically had enough money to print twice a month, but then when we started paying people we were just getting into the red.”

So they went back to a monthly schedule. Now they print 11 issues a year, at the beginning of every month except January.

Which is fine by them. “We’ve never had the goal of going weekly, doing what the Mirror used to do,” Carpenter said.

Unlike the Mirror, Cult’s website is very active, with a lot of content that never makes it into the print edition. Stuff that’s more newsy generally ends up there, rather than waiting up to a month for the next print edition. 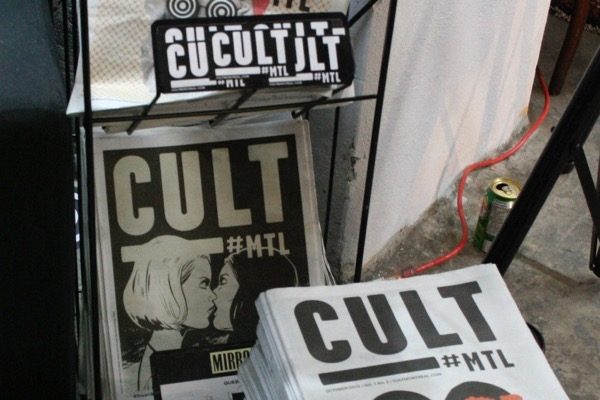 I asked Carpenter if the motivation has worn off after five years of hard work. She said no.

“I was at the Mirror for a really long time, 12 years or so,” she said, noting that it was only at the very end that she was an editor with some decision-making power. “Being able to be at the helm of something, I definitely don’t have any trouble staying motivated. My motivation now is the same as when we just started. It’s to give something to support the local cultural scene.”

Fortunately for Carpenter, she no longer has to personally distribute the paper, as she did in its first few months, loading a van every month and bringing copies to dozens of locations. They’ve hired a team of people to distribute the paper for them, despite offers from professionals (notably Diffumag, which distributes Voir) to take them on as clients.

I asked Carpenter about what she’s learned after five years, what advice she could give a 2012 version of herself.

“In the early days we were definitely overextending ourselves trying to do too much stuff, trying to appeal to too many groups at the same time,” she said. “There was a phase where I found some of the stuff we were putting online was too clickbaity.”

So, she said, she’d tell herself: “Chill our a little bit and try to focus on what our real purpose is.”

Like The Mirror and others, Cult’s main selling point is the audience it can reach: young, hip urbanites. Though Carpenter said they have a mix of readers, and the responses to the Best of Montreal polls made that clear.

“You can tell it’s the same people in their 40s and 50s who have been filling out the same form for the Mirror for years,” she said, but there were also answers, particularly in the nightlife section, that showed a different crop of younger people.

Changes in media technology have meant doing things that the Mirror never had to worry about. Like maintain a Facebook page and use it to engage readers.

“We’ve had to learn how to write headlines and excerpts for Facebook,” Carpenter said, to make people want to read stories without resorting to the clickbait gimmicks. Instead, they want to “get our message across: This is what this is.”

So what’s in store for the next five years? Probably more of the same, but better. A website redesign is coming “soon”, Carpenter said. As revenue increases, they want to start paying freelancers better, and eventually add to their staff. “It’s always been my goal to expand our editorial team,” she said. “It would be nice to have an extra person.”

But as far as the content is concerned, it’s still going to fulfill its mandate: to inform readers about what’s going on in the soul of this city.

Cult MTL celebrated its fifth birthday with a party at SAT on Saturday, Aug. 12. For information about Cult MTL, go to cultmontreal.com. To pick up a free copy of their print edition, visit one of the places listed on this page.

If you’re watching TV tonight, you might want to tune to Vermont PBS (WETK) to catch two shows the focus on Montreal. Or you can watch both online.

Then at 8:30pm, it presents Qulture, a documentary-style show about Montreal culture produced with Cult MTL. This episode, described as a pilot, but with no clear indication whether there will be other episodes, discusses comedian Sugar Sammy, graffiti artists and the local vaudeville scene, and a bit about Cult itself along the way.

Vermont PBS is available on Channel 55 on Videotron Illico, Channel 57 on Videotron analog cable (Western Montreal only), Channel 224/1224 on Bell Fibe, and Channel 33.1 over the air. 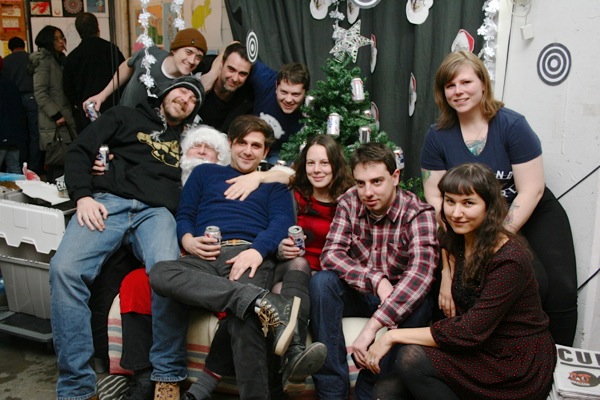 It’s not often you get to write a happy news story about struggling print media. Heck, the blog post just before this one is about hundreds of jobs being lost and big papers shutting down. But while other papers have decades of history and so-called “legacy costs” and are slashing their workforce to face the new industry reality, Cult MTL is building itself up slowly from the ground. And through a mixture of incremental steps and fuelled by a large amount of good-will unpaid or underpaid work, it’s establishing a future for itself and filling the hole that was left by the shut down of Hour and Mirror last year.

It was one year ago today that the cultmontreal.com website published its first articles. And in today’s Gazette, I talk to the brains behind the operation about their progress and future plans.

It’s during that meeting a little over week ago that they told me Cult was moving to a twice-monthly schedule (the next issue comes out starting on Thursday) and that they’re looking for permanent office space.

The three senior editorial staff were surprisingly open with me about how things are going there. Part of being so independent is not having to keep too many trade secrets. I didn’t ask them for their tax returns or anything, but they answered every question I asked as best they could.

Here’s a roundup of things they told me.

END_OF_DOCUMENT_TOKEN_TO_BE_REPLACED

When Quebecor shut down Mirror last June, we just assumed the annual Best of Montreal readers’ poll was dead. But fear not, folks, because its unofficial successor Cult MTL is bringing it back.

The concept remains the same: Readers fill out an online form listing their favourite restaurants, clothing shops and media personalities, often following campaigns from those restaurants, clothing shops and media personalities eager for free advertising. The results are compiled and published, often leading to complaints from hipsters that too many mainstream things are popular.

You can fill out the survey here until May 17. The results will be published in the June edition of the paper.

Cult is also encouraging Instagram users to get involved, snapping and sharing pics of their favourite things.