And in some cases, it’s technically minor but incredibly embarrassing. I always sympathize with unintentional errors, even when I expose them for all to see.

If this had been any other Montreal media, I’d be posting it here with, I admit, a little bit of childish glee. But it was my paper.

And worse than that, it was me. 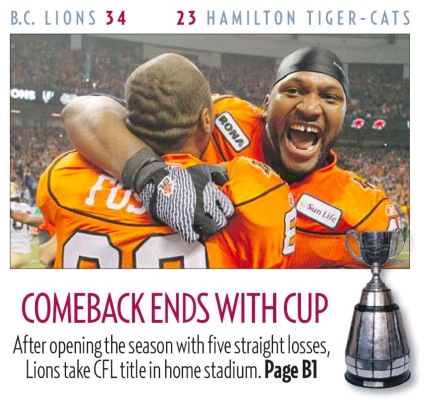 I got an email this morning from Sarah Leavitt at OpenFile asking if I was working last night “when the Grey Cup mess up on the front page happened.” Since I had no idea what she was talking about, I turned on my laptop and looked at the electronic version of the paper (I’m too lazy to walk downstairs for the print version). I read the pointer text I had written, looked at the photo of the players and of the Grey Cup, looked at the page number it pointed to. I looked at the score to make sure it went in right. Yeah, it was 34-23 for the Lions…

In case it hasn’t occurred to you, the error, which appears downpage on A1 on Monday, is that the name “Hamilton Tiger-Cats” should be “Winnipeg Blue Bombers”. It’s not like I wasn’t aware the Blue Bombers were the ones playing. But for whatever reason it didn’t hit me as I was filling in the rest of the text that Hamilton wasn’t the right team.

And it didn’t strike the other editors who read the front page, who are not big sports fans and had specifically asked me to write this text because they were worried about getting something fundamental wrong.

Naturally, this error did not go unnoticed. Influence Communication saw it and told its 12,000 followers. Mike Finnerty noticed it (and was nice about it, comparing it to one of his own errors). OpenFile has a story on it, by Leavitt, which quotes me trying to explain myself.

But really, there is no excuse. Just a very embarrassing correction in Tuesday’s paper, some teasing by fellow editors on the sports desk, and some reader email questioning our competence, all of which is clearly deserved.

Correction printed in The Gazette on Page A2 on Nov. 29

UPDATE (Nov. 29): I got some good-natured ribbing from my colleagues at work, and the newsroom manager said she got about a dozen phone calls from readers, many of them dripping with sarcasm. (I didn’t see any emails about it, though. Perhaps because the mistake wasn’t repeated online.)

News of the mistake made it to the Hamilton Spectator, which posted a story about it on Monday afternoon and included an image of the error in Tuesday’s paper.

The Gazette correction appeared in Tuesday’s edition on Page A2.Too late, apparently. There are also two letters to the editor on the subject.

UPDATE (Dec. 4): Craig Silverman wrote this up for his column in the Toronto Star. 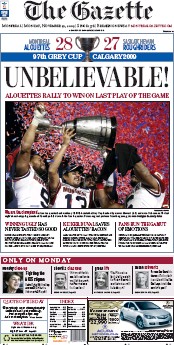 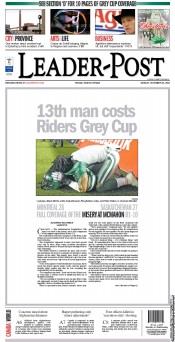 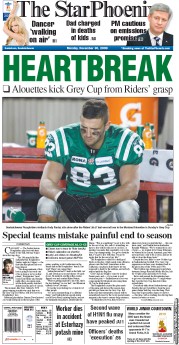