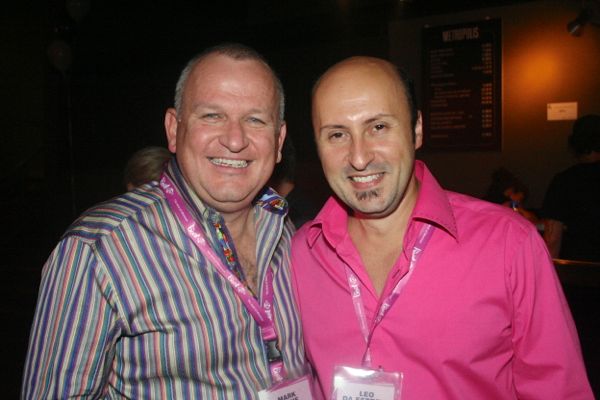 The Beat’s general manager Mark Dickie, left, and program director Leo Da Estrela at the station’s one-year anniversary party in 2012. Both are leaving the station.

When word started to spread that the top two people at The Beat had resigned, many came to a quick conclusion: Cogeco is cleaning house, maybe in response to unsatisfactory ratings, or because, one rumour went, they were planning to sell the station.

As it turns out, everyone involved says it’s just a coincidence. Really bad timing.

Last Friday, general manager and general sales manager Mark Dickie informed his bosses that he was resigning in order to accept a position as a manager of multiple radio stations at Corus Entertainment. Because he was leaving for a competitor, even though it wasn’t in the same city, his three weeks’ notice was waived and he was asked (politely) to leave the building, though neither he nor Cogeco Diffusion have any hard feelings. Staff were informed of his departure on Monday.

Leo Da Estrela, the program director, has been named interim general manager. But he, too, is leaving. He actually informed his bosses in September that he wanted to leave, but he was asked to stay on until December. With Dickie’s departure, he’s been asked (and accepted) to stay on until April to ensure a smooth transition to new managers.

At the same time, promotions director Linda Fraraccio is also leaving The Beat. This Friday was her last day at the station, and she starts a new job at CTV Montreal as manager of creative services, marketing and community relations, on Monday.

I write about the three departures in this story, which appears in Saturday’s Gazette. It includes comments from Dickie, Da Estrela and Cogeco Diffusion President Richard Lachance.

Here’s some more detail about what’s going on: