I should give fair play to Jamie Orchard. My last post about her blog was unflattering. But her latest post, about the whole McKibbin’s language-police debacle, is much more interesting:

The OLF insists that all the owner has to do is write back and explain that the signs are artifacts. In fact, when the OLF saw our TV footage of the signs, they said right away the case could be solved easily – here’s the quote from Gerald Paquette:

There are many Irish pubs in Quebec that have these kinds of artifacts and they have all asked for an exception.”

We told this to the owner of the pub on Thursday, and he seemed relieved. But then, on Friday, the co-owner of the pub was on talk radio insisting that he would have to go to court to fight this, making a big show of inviting the premier to his pub to look at the signs, insisting he would refuse to pay the fine. He was getting all the sympathy in the world from the host, from the callers, from everyone, and never once did he mention it could all be solved with a simple letter.

I’m not going to leave the OLF (actually the OQLF) off the hook entirely, since they did, in fact, bring up these signs in their complaint (which was from a customer who said he wasn’t served in French and an outdoor menu was in English only).

But it’s clear the media (and I have to include myself here, since I edited the big article in Friday’s Gazette about it) played up the signs and outrage campaign while burying the other complaints and the comments from the OQLF that they could easily get an exemption. (Second-day stories are pointing these things out, but that wouldn’t have been necessary if they weren’t buried in the first place.)

UPDATE (Feb. 27): A video on YouTube shows the original letter from the OQLF to McKibbin’s, which clearly is much more about the posters than the office later suggested to reporters. Also plenty of discussion on some franco forums.

The news outlets were buzzing today about the fact that spending on Boxing Day went down this year compared to previous years.

I find that funny because, you know, Boxing Day hasn’t happened yet.

The news, naturally, comes out of a VISA press release, which they based on a survey that asked people what they planned to do. This, I guess, is somehow infinitely better than waiting two days and just finding out what they did.

But VISA knows a slow news day when it sees one, and the news fell for it.

Reading that, you might ask yourself how geography is relevant to online security or other stupid questions. But rather than take a comprehensive look at online fraud, bank/mail fraud, or information security practices of businesses and government, it commissions a poll that rates cities based on how many people say they’ve installed up-to-date anti-virus software on their computers.

Talk about thinking highly of yourself. Naturally, the solution to all this is to get more people to install anti-virus and other security software on their computers. And it just so happens…

The press release cherry-picks selections of some other data, without giving any idea how to get full breakdowns from them. Either way, all the data is based on what people say, not on what kinds of online crime actually happen in those cities.

Any bets on how many other news outlets will overlook these facts and run this as if it was a StatsCan report? 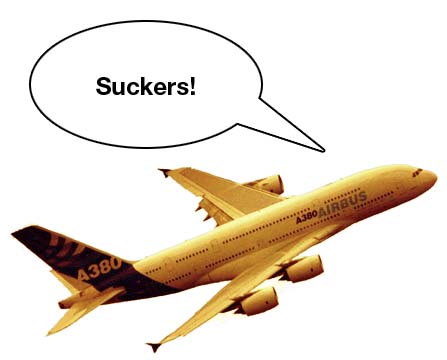 Here’s an interesting story that’s been raising eyebrows today: Jean Bédard, who runs an offshore financial services company apparently called Offshore Financial Services, is being sued by the National Bank, and because he’s running out of money and the moral and financial stakes are so high, he’s decided he has no choice but to sell a kidney to pay for court costs.

He hasn’t actually sold a kidney yet. He hasn’t even really setup the procedure or figure out where he’s having it done (it’s illegal to sell organs in Canada). But that didn’t stop him from talking to Gazette freelancer Mark Cardwell and CTV’s John Grant, suggesting that only a settlement with the bank would stop him from performing this dangerous operation.

Bédard is clearly trying to use the media (and doing so effectively with a good news hook) to influence the outcome of his case. But unlike those consumer advocate segments where grandma gets reimbursed her $50 fee error, I doubt the National Bank is going to walk away from a six-figure legal case.

The legal precedent of the case is interesting. In essence, Bédard deposited a $1.5 million cashier’s cheque (which is a cheque guaranteed by a bank) into an account at another bank. He then sent some of that money overseas before the bank realized the original cheque was forged. (Sound familiar? Yeah, it’s the old overpayment scam) The bank was out $179,957.67, and sued Bédard.

What sets this case apart from other similar scams is the use of a cashier’s cheque or bank note, which is guaranteed by the issuing bank. As such, it’s usually cleared immediately and is considered as good as cash. That’s what happened in this case: the bank cleared the cheque and Bédard assumed it was genuine. The judge dismissed the case because the bank accepted the cheque (and because Bédard clearly wasn’t trying to defraud them). The bank is appealing:

“It’s not the money, it’s the principle,” said the bank’s lawyer, François Viau, a partner with the Montreal office of Gowlings, Lafleur, Henderson. “If the ruling prevails, banks would have the burden of verifying bank drafts against the issuer.”

That, he added, “defeats the very idea of a bank draft.”

That’s true. But for a bank to suggest that it shouldn’t have to verify bank drafts before releasing funds is just as silly. Either it has to be treated like a regular cheque (frozen, verified and then released) or like cash (checked for obvious signs of forgery and immediately redeemed). They can’t have it both ways.

UPDATE (Sept. 22): Letter-writer Sheryl Keeble points out that those in desperate need of a new kidney aren’t finding this funny, and that perhaps simply declaring bankruptcy would be preferable to getting third-rate doctors to harvest your organs for a few pennies.

The Gazette has an editorial today about the Beaver survey and it notes that — gasp — online polls shouldn’t be taken too seriously:

Talk-shows hosts, bloggers, columnists, pundits and letter-writers have all had fun with that online poll, organized by the august historical magazine The Beaver, in which respondents named Pierre Trudeau “the worst Canadian.”

It’s all good fun, we suppose, but it should also be a reminder online polls of this sort are not worth the paper they aren’t printed on.

I looked up the story, and most of the bloggers I’ve found saw right through the lame, transparent attempt to get free publicity. The paragraph leaves out the paper itself in those it names as having “had fun”. After all, it put the non-story on its front page Tuesday morning, one day after the Beaver issued a press release about it. (Little tip folks: Get something on Canada Newswire that’s not business-related and some paper somewhere will rewrite it into a story to fill space. Don’t bother trying to support your outrageous claims with facts, nobody cares about those.)

The editorial makes a couple of points: that online reader surveys shouldn’t be taken at face value (duh), and that “participatory journalism” has its problems:

Reader-participation journalism, a clear trend in print as well as online, has many virtues and can be a valuable tool.

But without the constraints of rigorous sample-selection techniques and careful choice of questions, the findings of some such processes are not only laughable, as with the Trudeau choice, but they can also be potentially dangerously misleading.

Just in case it wasn’t clear yet that mainstream media has no clue what participatory journalism is, here we go.

At the risk of repeating myself, the following things are NOT participatory journalism:

Many of these things are good ideas, but they’re not participatory journalism.

Sorry, mainstream media, but you got suckered in by a press release about an outrageous unscientific survey. Don’t blame it on bloggers and new forms of journalism that are entirely irrelevant here.

Let’s give a round of applause to Montrealer Allan Wills. He’s managed to exploit two vulnerabilities of the media: their desperation for stories in the summer and their cluelessness about the Internet, to grab his 15 minutes by the gonads. A long package on yesterday’s CTV News, and a Page A3 article in this morning’s Gazette.

His story, basically, is that he put up a website (actually a blog) asking for a wife, and this not-unattractive British girl answered him. Now they’re dating.

Now, if I were a cynic, I might point out that they’re not married, and the focus of the blog has changed from finding a wife to finding an “ultimate date”, and that finding dates online is nothing new (in fact, there’s an entire bloody industry for it), and that quitting your job to go searching for dates is kind of a boneheaded thing to do.

But instead, I will applaud Mr. Wills’s media savvy, wringing his 15 minutes from an uninteresting story about a waste of his time.

(I will also applaud him for his babe of a girlfriend. And with an accent to boot!)

UPDATE July 31: A spot on Canada AM, just in case there were doubts about the non-newsiness. And check out the Daily Mail article on him for more, including pictures of his other hot dates (a redhead!).