According to La Presse, Radio-Canada is considering a French version of Battle of the Blades. That’s interesting news. But I’m not sure about the picture they used to illustrate it.

I realize cutouts like this are used often in printed newspapers without an indication that the photo has been manipulated, but it’s clearly called for here, no?

I mean, some people notice these things.

UPDATE (Nov. 13): After being alerted to the error, Cyberpresse has fixed the image. Apparently an online editor took the cutout (used for a section front) and didn’t think to replace it with the original photo. 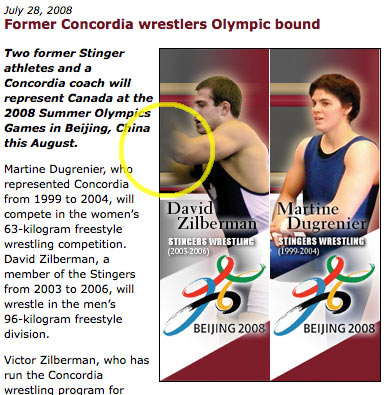 Apparently Concordia has two alumni at the Beijing Olympics in wrestling. Not only do they both glow, but David Zilberman has arms that fade into invisibility. That sounds like it would be an awesome advantage in wrestling. Media around the world (including The Gazette) got pwned by a photo that turns out was badly doctored by the Iranian government. The image shows four missiles firing when in fact there were only three.

USA Today is already moving to the analysis phase, asking: “Who can you trust?” The problem of doctored news photos is hardly new, as shown in this Chicago Tribune gallery, though in most cases it’s the photographer who is the one at fault.

One thing that the fakes shown in the Tribune gallery have in common is that they were all discovered after the fact because they were such obvious fakes. It forces you to wonder how many subtle fakes, done by the same people who alter celebrity photos for magazine covers, are still out there having never been discovered.

But even if a state-of-the-art auditing system was put in place to make sure that news agency photographers never even touched Photoshop, that still wouldn’t have prevented this problem. The photo in question was taken from a website and presented as-is. Captions (including the one The Gazette used) identified the photo as having originated at the Iran Revolutionary Guard website, but the fact that the news agencies feel betrayed suggests that they all took the photo at face value.

Was that wrong? Did the media err here? Did they implicitly trust that the photo showed something accurately? Did republishing it imply vouching for its integrity?

(This isn’t just a problem with photos. Non-political stories from China’s Xinhua news agency get copied by other agencies all the time, almost always with a mention that Xinhua is controlled by the government, in a take-it-with-a-grain-of-salt way that they wouldn’t say about, say, the CBC. But headlines over those stories don’t suggest any question as to their authenticity.)

As image editing software becomes more widespread and easy to use, more fake images will emerge and they will be harder to spot. Relying on someone noticing the atrocious Photoshop skills and ridiculously bad use of the clone tool hardly sounds like an appropriate way to ensure editorial integrity.

And what about those images that skirt the line between ethical and not? What about handouts from auto manufacturers, that are used without question even though they’ve obviously been severely altered in Photoshop to make them (and the backgrounds they’re set in) look as smooth and appealing as possible? What about movie stills that have been airbrushed to death? Or should they get less scrutiny because they’re not news photos?

Someone needs to have a debate here, and fast.

UPDATE (July 13): Lots and lots of people are having crazy Photoshop fun with this photo on the Flickr.

UPDATE (July 14): Regret the Error is, of course, all over this with correction highlights. I know Getty Images likes to … play … with its photos to enrich their colour (make the Red Wings’ red uniforms look like they’re almost glowing).

But this photo by Bruce Bennett really takes the cake.

Unless Dallas Drake really did get his teeth ultra-whitened before lifting the Stanley Cup. (And Johan Franzen really is a vampire.)